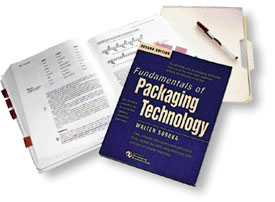 At Abbott Diagnostics, a division of Abbott Laboratories in Abbott Park, IL, a new, company-sponsored educational initiative for its packaging employees turned 11 of Abbott's test makers into test takers, with positive results. Beginning in May, 2002, members of the company's packaging department embarked upon a 20-week, in-house group-study program based on the Institute of Packaging Professionals' (IoPP) Fundamentals of Packaging Technology seminar, with the ultimate goal of earning Certified Packaging Professional (CPP) or Certified Professional in Training (CPIT) designations through the IoPP (See PD, June, '02, p.50).

One determinant of CPP certification is an applicant's performance on a multiple-choice exam, based on the course textbook. Says Stan Zelesnik, IoPP's director of education, "There is a significant failure rate for the test, particularly for people who believe they've been in the business long enough that they don't have to study.

"Abbott's people didn't take anything for granted," he adds. "Not only did they all pass the test, but they blew it away. Their scores were very, very high." For Abbott, its investment in education generated immeasurable dividends, yielding a packaging department staffed with industry-recognized experts with a common knowledge base and a firm understanding of packaging fundamentals.

Building on packaging expertise
Since 1972, Abbott Diagnostics has been in the business of engineering tests for the healthcare industry that diagnose a number of conditions, including cancer, drugs of abuse, HIV, blood glucose levels and others. For many of its kits, used by doctors and laboratories, packaging is designed primarily to provide sufficient durability during handling, as well as all required labeling information. For those tests distributed to the retail market, such as Abbott's glucose monitoring systems, packaging must also present well on the shelf.

Responsible for designing both institutional and retail packaging, Abbott Diagnostics' packaging department, managed by David Satchell, is comprised of a number of individuals with varying educational backgrounds. Explains Mari Bakken, packaging engineer for Abbott Diagnostics and the coordinator of its IoPP study group, "Some of the members are packaging engineers, some are mechanical engineers, and some have chemical or industrial backgrounds."

When several department members expressed an interest in becoming IoPP-certified, management not only supported the endeavor, but also encouraged the rest of the packaging staff to seek certification, as well. "It was thought that a common fundamentals background would be invaluable in working on any number of packaging projects," explains Zelesnik. "It would also put the group at a more efficient level than competitive companies without this common knowledge base."

Certification: a demanding process
Since it began offering the program in 1972, IoPP has awarded more than 1,500 individuals with the CPP designation. While the association offers a flexible qualifying procedure, the examination process is quite rigorous. To be considered for certification, individuals must have a minimum of six years' experience in packaging or a closely related discipline. Some credit is also granted for educational degrees in packaging. Those without the required experience are eligible to earn the CPIT designation until they accumulate the years.

To sufficiently demonstrate their knowledge of applied packaging technology, qualified candidates are required to complete two of four options: the multiple-choice exam, a narrative exam, a resume of activities, or submission of a written paper, or proof of a paper published or a patent granted within the past year.

Candidates opting to take the exam typically make use of seminars sponsored by the IoPP throughout the year that consist of four separate, three-day sessions, based on the 600-page textbook, Fundamentals of Packaging Technology, by Walter Soroka. Many other candidates study the materials on their own or in small study groups of two or three.

In Abbott Diagnostics' case, it was not feasible for the company to have its entire packaging staff absent from their duties for 12 days to attend the seminar. Instead, the company decided to make available the time and facilities to its packaging employees to effectively study for the exam. For 20 weeks, the group met one hour a week at lunchtime to partake in lunch, courtesy of Abbott, along with a lively discussion of the course material.

Group sessions enhance learning
During each of the 20 luncheon study sessions, two or three members of the group were assigned to present a chapter, answering the questions that followed each section in the textbook.

Recalls Zelesnik, "I attended one such session and was very impressed with all the individuals, their high level of preparation and the spirited discussion that resulted on certain more complicated matters."

In addition to using examples of past and present Abbott projects in their discussions, the students also studied the common, everyday packaging formats they had at hand, notes Bakken, such as a glass soda bottle or a thermoformed lunch container.

She adds that the group-study environment considerably enhanced the learning experience. "I think I learned a lot more by studying in the group than I would have by just doing it by myself, and I think that applied to the other people in the group, as well."

While IoPP gave its blessing to the group-study program, take-home tests were a solo project. Despite the fact that it was open-book, the exam, notes Bakken was still quite challenging. "There were quite a few questions that I wasn't sure I had answered correctly," she says.

Study group succeeds
But, Bakken needn't have worried. She, along with two of her coworkers, earned the title of CPIT, while the rest of the team received CPP designations. Now, along with the impressive suffixes after their names, Abbott Diagnostics' packaging employees also are reaping the rewards of an intensive team-building experience, with enhanced communication and a shared knowledge base. Studying alternative packaging technologies may also broaden their future product-packaging horizons, as well.