Aseptic milk expected to be a slam dunk 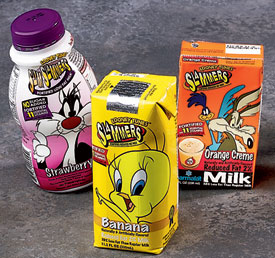 The new lines, which replace North Palm Beach, FL-based Bravo!'s original Looney Tunes™-brand flavored milks, introduced in '01 (see PD, August, '01, p.38), represent the marketer's attempt to differentiate its product from others in the burgeoning flavored-milk market. Says Roy Warren, Bravo! CEO, "To the child, we think it's going to become known as a cool, sort of irreverent single-serve shot. To mom and dad and the nutritionist at school, we hope they will think of it as something that's 'slammed' full of nutrition."

Called by Warren "the first legitimate competitor to the juice box in the grocery aisle," Slammers in an 8-oz Tetra Brik carton was introduced last October in three New York retail grocery chains. The Slammers Brik is offered in the five original Looney Tunes flavors of Chocolate, Vanilla, Banana, Strawberry and Orange Cr?me and has a six-month shelf life. Depending upon consumer acceptance of the product, Parmalat USA, which packs the milk in the Brik in its Grand Rapids, MI, plant, hopes to ultimately expand distribution nationwide, says Warren.

Slammers in an 11.5-oz Tetra Prisma carton produced by Jasper Products LLC of Joplin, MO, so far is the version of choice for convenience stores, namely 7-Eleven, and schools, says Warren. With an eight-month unrefrigerated shelf life, the carton works well in c-stores with limited cold-storage space and can be stocked in school vending machines without the fear of product going bad if the machine is unplugged. "Many schools also prefer not to have a resealable product in the school, because they don't necessarily know what the kids might put in the bottle," Warren adds.

Slammers is also offered in the original Looney Tunes package–an 11.5-oz resealable high-density polyethylene bottle with a full-body sleeve label from Osio Intl. The ESL beverage, produced by Jasper and by Shamrock Farms Dairy of Phoenix, boasts a 75- or 100-day shelf life, depending on producer, and can be found in approximately 40 percent of the retail grocery stores nationwide.

And, scheduled as of presstime to hit the shelves in Publix and Shaw's supermarkets is Bravo!'s Slim Slammers line in the ESL bottle. With almost 40-percent fewer calories and half the fat of most flavored milks, according to Bravo!, Slim Slammers, in all five Slammers flavors, offers a no-sugar-added alternative that is especially popular with schools. The line will also be available in the Prisma, from Jasper.

Graphics for the new Slammers and Slim Slammers lines borrow heavily from the original Looney Tunes milk packages, using Tweety Bird, Sylvester (replacing Lola Bunny), the Tasmanian Devil, Bugs Bunny, and the Road Runner and Wile E. Coyote, to differentiate flavors. Bottle graphics, says Warren, were redesigned so that characters and nutritional information can be viewed no matter what the bottle's positioning on the shelf. While Slammers uses bright, bold background colors, Slim Slammers uses the same colors at the bottom of the package and gradually fades the colors to white at the top, "communicating that this is a light, or a slim, product," explains Warren.

Addressing consumer acceptance of aseptic milk–a product that has notoriously not sold well in the U.S.–Warren says that while it is too early to gauge the success of Slammers and Slim Slammers, Bravo! has found that "people are generally very happy to learn that there is an alternative to juice in the juice box section." He adds: "We think this orientation toward children has a good chance of changing consumers' perception about aseptic milk, not only because of the packaging, which is colorful and has the Looney Tunes characters on it, but also because of the fortification that Slammers brings. This is a big deal from a nutritional standpoint. If we can just get the gatekeeper, mainly mom, to understand that." Circle No. 377.