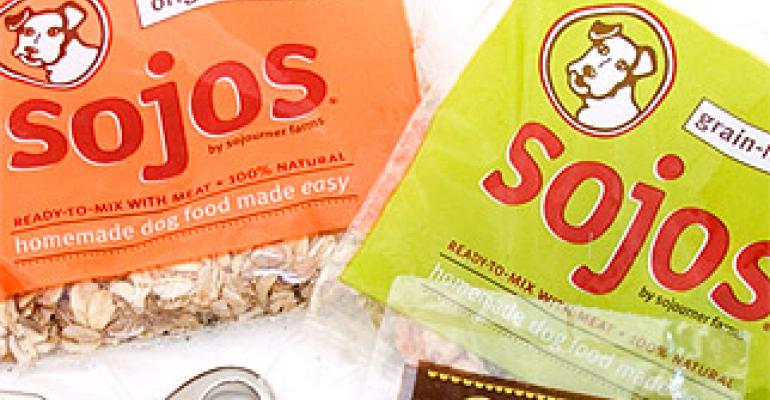 A new bagging machine has increased efficiency dramatically for petfood producer Sojourner Farms, Minneapolis. The company promotes its products by handing out small sample bags of dog treats and dry food at shows, stores and other venues. Sojourner was filling and sealing these bags manually, and president Ward Johnson decided that the operation had progressed to the point that he needed to look into a more automated operation.


“Manually filling the bags with dog treats and dry food was very labor-intensive,” says Johnson. “I wanted to install an automated bagging system that would improve the cost-effectiveness and efficiency of the operation.”

Johnson had some experience with Sharp Packaging Systems Inc., so he contacted Sharp's distributor Anchor Paper Co., which stocks the bagging systems and the bags, to discuss adding a system to replace the manual bag handling. After reviewing possible options, Johnson purchased a Sharp MAX bagging system.

Sharp works closely with M&S Automated Feeding Systems Inc., which makes centrifugal and vibratory bowl feeders and related equipment, and M&S installed a vibratory feeder on the bagger at its plant. Because Sojourner is filling treats or powder into the bags, the feeder is equipped with both weighing and counting systems. The integrated system was installed at Sojourner Farms this past February.

To start the operation, a worker empties product into a cone-style bulk product hopper on top of the machine. This hopper delivers the product into a vibratory-style feeder bowl that moves the product up and forward so it is properly spaced along the track. If the plant is running pieces, like dog treats, they must be spaced so that a laser eye can count them. At the end of the track, the product moves past the count sensor followed by a scale, and then discharges into a bomb-bay-style dump bin.


Switch for pieces or powder

The operator sets a switch on the control panel for either pieces or powder, and this dictates whether the counter or the scale controls the dump. Sojourner typically fills as much as 10 pieces or 0.75 to 1.75 oz of product into a bag, and the operator sets these quantities into the controls. When the proper amount of product is in the dump bin, the feeder stops, and the dump bin opens and discharges the product into an insertion funnel below.

Simultaneously with the operation of the feeder, the Sharp bagger pulls preopened, perforated, biodegradable PE bags from a roll into the filling zone. The bags, which are also supplied by Sharp Packaging Systems Inc., are flexo-printed in four colors on both sides. In this integrated operation, the bag stops and an air-jet blows open the top of the bag as the feeding system's insertion funnel is filled. A door holds the bag open while it is being filled.

To ensure that the powders do not adhere to the sealing area of the bag and compromise the integrity of the seal, the funnel descends into the bag before the product discharges. The funnel rises while the bag is being sealed, after which the machine reverses slightly, which breaks the perforations, so the bag separates from the web.

After the insertion and dump sequence, the feeding system triggers the bagger to begin its next cycle while the dump bin closes and the feeding cycle begins again.

The feeder bowl automatically restarts counting or weighing as soon as the dump bin closes, so it is already feeding product to the scale/dump bin for the next cycle, while the Sharp bagger is cycling. An electrical panel with an Allen Bradley PLC and HMI operator screen from Rockwell Automation controls both the feeding system and the bagger-cycle sequence. The operator selects which type of product is being bagged (powder or individual pieces) and enters the weight or the count on the HMI, and the system automatically controls the operation. The system runs 35 to 45 bags/min, depending on count or weight values.