4 packaging machinery technologies to scope out at Pack Expo 2014 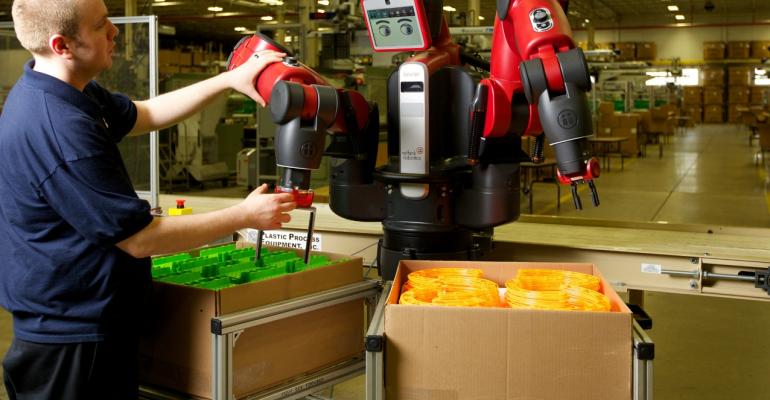 Robotics are working more closely, and more safely, with humans in packaging operations. Easy training, too, defines today’s automation pals, like with Baxter from Rethink Robotics.

Production expert identifies new technologies that are sure to help improve your packaging operation.

Pack Expo is going to be great this year. I always say that and am never wrong. People who know think one of this year's key themes is going to more intelligent, more interconnected machines. Not only will there be more intelligence, it will be decentralized and may appear in unexpected ways.

Here are some of the technologies I look forward to seeing:

[Note: Use the red View Gallery button above to launch the Slideshow.]

Industrial robots aren't new but they used to be expensive and dumb, best suited to repetitive operations. Better software—and the computing power to run it—combined with cameras now allow robots to locate parts at random and place them as needed. Series elastic actuators can make some robots intrinsically safe, eliminating the need for safety cages. If the robot's arm bumps a person, it stops. Rethink Robotics demonstrated this to me with its Baxter robot. Being hit by the robot arm was no different from being gently elbowed in a movie queue.

Costs have come down dramatically. Baxter costs less than $25,000 complete and has capabilities that would have cost ten times that just a dozen years ago. Several companies offer industrial grade SCARA type robots for less than $10,000.

Robots have long been available with 2D machine vision. This allowed them to locate objects on a plane and pick them up. Now, we are starting to see robots with 3D vision. This now allows them to pick random parts from a jumbled pile, orient them and place them in a specific location. I predict that in the near future we will see robots on the plant floor picking individual parts from bins or conveyors without the need for pre-staging. Sounds expensive, right? Some of this is being done using Microsoft's Kinect XBox controllers that cost less than $200 at the local electronics store.

The constantly improving price/capability of robots means we will see them in some radical applications. One Thai company will be showing a robotic filler that may revolutionize packaging machine design. Bottles are spaced on a servo-driven conveyor. As the bottles pass, 10 filling nozzles mounted on a robot arm enter, fill and withdraw. This design eliminates much of the hardware of the typical liquid filler and virtually all of the mechanical changeover.

Accelerometers, for detecting vibration, used to be expensive but are now in every smart phone. That makes them cheap enough to place in every motor, transmission or bearing. Failures can be taken care of before they occur rather than waiting for catastrophe.

Vision systems have always been limited to inspecting what they can see. Pharmaworks has recently developed a 3D inspection system for inspecting tablets in blister cavities. This allows them to inspect the volume of a tablet in the blister as well as the surface.

Any inspection system can only be as good as its analysis. It is common for packaging machines to shut down if they detect several defects in a row, such as three miscapped bottles. If every 27th bottle is miscapped, most inspection systems will reject them but take no further action. Real-time SPC (Statistical Process Control) built into the system can recognize patterns and sound alarms or even stop a machine. Failure modes that appear random on the surface can be identified once the pattern is recognized.

Control of label inventories is a real chore especially in heavily regulated industries such as pharmaceuticals. One solution, not practical in the past, is to inventory unprinted ("bright") labels and print them at time of use. This has become standard practice on secondary packaging, such as corrugated shippers. Several companies will be showing roll-to-roll label printing systems using Memjet inkjet technology to digitally print high-resolution, full process color labels on demand. The killer app for this is integrating it with an automated labeling machine to allow printing and applying of primary labels at production speeds. It's not here yet but I see it coming in the near future.

Thermal inkjet coding, much of it based on Hewlett-Packard technology, continues to grow in capability and popularity. One drawback up to now has been the ink. It has not been possible to print on most non-absorbent surfaces like plastic or varnished board. This has changed with the recent introduction of solvent based inks, opening the way to many more applications.

Motors have downsized over the years from large central motors to small individual motors at the point of use. The next logical step is decentralization of control and we will see this on the show floor. Instead of a single control in one large cabinet, controllers and drivers are now located at the motors.

Some companies, such as B&R Automation, put the controllers right in the motor. Others, such as Kollmorgen, mount them in small, separate boxes at the point of use. Each of these approaches has its advantages but both avoid much of the wiring and complexity required when the controllers reside in a central panel.

Smarter machines become visibly apparent in some of the new HMIs (Human Machine Interface). Think of them as tablet computers on steroids. HMIs used to be primarily for control but can now include a wealth of information, including machine manuals, machine animations, video and pictures, SPC charts, alarms and pretty much anything that you can imagine.

Yes, PackExpo 2014 is going to be exciting. As always, we will see some interesting new mechanical concepts. The real magic is going to take place behind the scenes in the details. Smarter machines will be simpler machines, more reliable machines and more effective machines.

Who could ask for more?

Known as the Changeover Wizard, John Henry, CPP, is the owner of Changeover.com, a consulting firm that helps companies find and fix the causes of inefficiencies in their packaging operations. He produces a free monthly newsletter called Lean Changeover, which contains articles and tips on changeover and related issues. Reach him at [email protected].