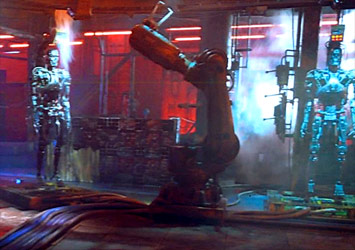 The visibility of ABB Robots will reach an entirely new level on May 21, 2009 when Warner Brothers Studios releases the new Terminator Salvation movie to North American audiences. In addition to Christian Bale and the army of rival Terminators, 18 ABB Robots will share starring roles in the fourth of the highly popular Terminator film franchise.

Appropriately cast in a versatile manufacturing role, 12 ABB IRB 6620s and 6 ABB IRB 1600s spent the summer of 2008 on the movie set in a converted power plant in Albuquerque, New Mexico.  Through special effects, the robots are arranged in an almost endless manufacturing line of robots on the Terminator factory floor, mass producing a growing army of the Terminators.

Jaffe Entertainment, a product placement firm, had initially contacted ABB and other robotic manufacturers to investigate the possibility of using their robots and to review their individual product lines. Academy Award winning set director Victor Zolfo and production designer Martin Laing were most intrigued by ABB’s product offering, and began working with ABB Robotics Vice President of Marketing Ted Wodoslawsky to work out the details and select the robot models.

“We looked at a variety of different robot manufacturers, but were most struck by the presence of ABB’s robots, especially the larger units,” said Zolfo. “They had the right lines and they provided the feel that they could actually be making Terminators.”

ABB Field Service Engineer Erik Ryskamp, with periodic support from additional ABB technicians, spent 10 weeks during the summer of 2008 on set, installing, programming and operating the robots.  An ABB IRC5 controller was provided with every robot to facilitate the precise programming required for the various scenes.

“Erik and his team worked with us very closely creating an incredible ballet with the robots, actors, stuntmen and Christian Bale,” said Zolfo. “What the ABB programming system was able to get the robots to do was better than we ever expected.  The robots are very visible and instrumental in the final, climactic scene of the movie.”

“Originally we were scheduled to be on-site for about five weeks; I think when McG (movie director) saw how cool the robots worked we got the chance to be in a couple more scenes,” said Ryskamp. “I really got a feel for all the planning and effort that is put into every individual scene.” 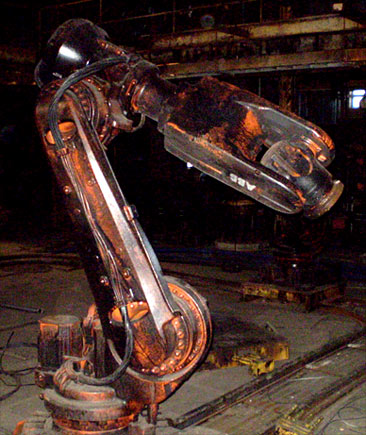 Just like the human actors, many of the robots were significantly made-up, covered with black soot to appear as if they had been in rigorous use for an extended period in dingy conditions.

“The robots were really an evolutionary character,” said Zolfo.  “Like an interim step between the humans and the Terminators.”

All robots have since been returned to ABB and have been prepped for less visible, but equally important future roles in real-life industrial manufacturing!

“It was a great deal for both parties.  Terminator Salvation got to use ABB robots and engineering expertise, and we get the exposure of our robots being featured in the film, with ABB logos prominently displayed,” said Wodoslawsky.  “They were attracted by the strength and durability of the IRB 6620s, and the lighter, nimble nature of the wall-mounted IRB 1600s.”

To see the ABB Robots in their starring role, plan on seeing Terminator Salvation this summer!