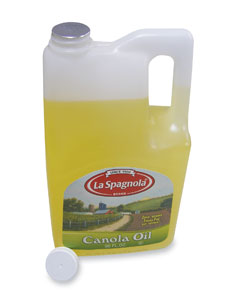 New air-cooled induction-sealing systems from Enercon Industries are having a big impact at cooking-oil producer Catania-Spagna, Ayer, MA. By replacing water-cooled induction sealers with five air-cooled systems, Catania-Spagna has eliminated water usage, and also reduced its energy requirements because of the elimination of the water recirculators required on the former water-cooled units.

In addition, according to Steve Sampson, vp of operations, the air-cooled systems have reduced downtime, maintenance and the amount of defective product. Overall, Catania-Spagna saved thousands of dollars a year since upgrading the sealers. “We also struggled with rust and corrosion from the water recirculator, and it had to be flushed on a regular basis. Now, our downtime is practically nonexistent,” says Sampson.

The late Joseph O. Basile started Catania-Spagna, an oil-processing and packaging company, more than 100 years ago in 1900. It packages and processes cooking oils ranging from vegetable to fine olive oil, servicing the retail, restaurant, bulk and export-food industry. Four generations after its founding, while still providing its customers with the same service, quality and reliability, its methods and packaging technology have evolved with the switch to the air-cooled units.

The hot foil, in turn, melts a polymer coating on the innerseal. The heat, coupled with the pressure of the cap, causes the innerseal to bond to the lip of the container. The result is a hermetic seal. To avoid overheating of the induction head and other components, the sealers must be cooled, which was originally done by water. Enercon developed heat sealers that use air instead.

Catania-Spagna operates four packaging lines to keep up with demand, two of which rely on induction-sealing technology. It started using equipment from Enercon in the 90s, when it installed the water-cooled systems.

After more than a decade of use, Catania-Spagna decided that it was time to upgrade. “Our 2008/2009 initiative was to go green, and we started by replacing our water-cooled induction sealers with air-cooled systems,” says Sampson.

Catania-Spagna chose Enercon's Super Seal™ air-cooled systems, which support a gallon line and a jug-in-a-box line, sealing HDPE containers ranging from 3 L to 2.5 gal. They use universal sealing heads, which gives them the flexibility to run containers with cap sizes ranging from 20 to 120 mm without having to switch sealing heads.

With a century of packaging experience under its belt, Catania-Spagna knows how important progression is in the packaging industry. It continues to apply innovative packaging solutions allowing it to keep an edge by delivering the same quality product to its customers at competitive prices.