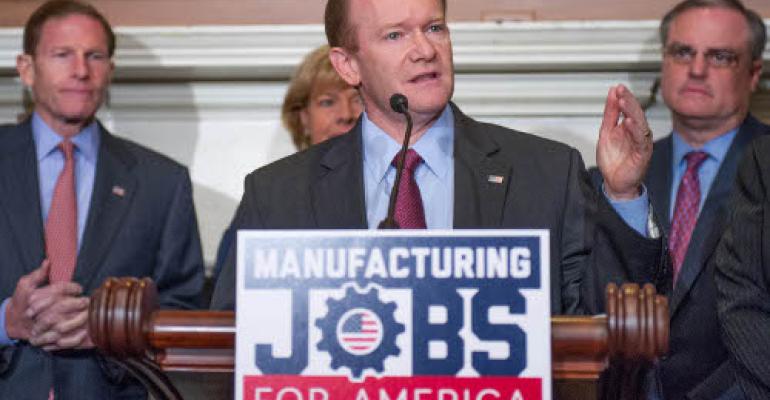 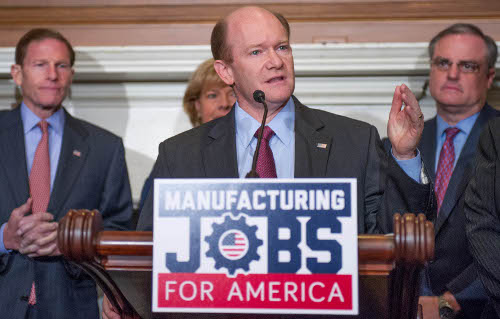 A new congressional report released Dec. 17, 2013, found that after a decade of devastating declines, the American manufacturing sector is recovering—and now is the time for Washington to invest in its confirmed growth. The report, authored by Joint Economic Committee Democratic staff, concluded that "manufacturing is the most innovative sector of the economy and is vital to U.S. competitiveness" and found that the value of U.S. manufacturing exports has surpassed the country's pre-recession peak.


"America's manufacturing sector is already coming back and is a critical part of our nation's economic recovery," says U.S. Senator Chris Coons (D-Del.), who leads the Manufacturing Jobs for America initiative in the Senate. "This report makes clear why it is so important that Washington focuses on manufacturing jobs instead of manufactured crises. Manufacturing jobs are high-quality jobs—they pay more in wages and benefits, create local service jobs, and contribute significantly to the local economy. This report thoroughly and thoughtfully lays out how Congress can make a difference in helping American manufacturers grow and create these good jobs, and I appreciate the excellent work by Senator Klobuchar and the Joint Economic Committee in putting it together."

"America is a country that innovates, makes things, and exports to the world, and manufacturing has long been an engine of economic growth and a key source of good jobs," says U.S. Senator Amy Klobuchar (D-Minn.), vice chair of the Joint Economic Committee. "This report highlights immediate, bipartisan actions Congress can take to strengthen American manufacturing, from cutting red tape to increase U.S. exports to boosting STEM education, and I will continue to work to move these initiatives forward so we can move our economy forward."

Among the report's most compelling findings about American manufacturing:
• Manufacturing exports are up in value 38 percent since 2009—beating their pre-recession peak
• Roughly 600,000 high-skilled positions went unfilled in 2012 because of a lack of qualified workers
• Manufacturing accounts for 12 percent of the nation's gross domestic product
• Manufacturers provide nearly 12 million jobs
• The manufacturing sector has grown by 554,000 jobs since February 2010, adding jobs in 36 of the last 45 months

"Manufacturing in America is fundamentally different today than it was when it fueled the post-war boom and built our middle class," Senator Coons says. "As the report shows, one of the areas that has changed is the nature of manufacturing work itself. Today, workers need to be better educated and more skilled—especially in science, technology, engineering and math. Rather than relying on assembly lines made up of many workers repeating the same task over and over again, modern manufacturers are increasingly requiring workers to carry out more complex and varying tasks. Our workers need to be more productive and more skilled because they are overseeing highly complex operations. Manufacturing still holds the same potential as it did before—we just need to modernize our manufacturing sector for the 21st century."

Since its debut in October, Manufacturing Jobs for America has grown to include 44 bills from 26 senators. Thirty of the bills have already been introduced, many with bipartisan support, around four principles:
• Strengthening America's 21st century workforce
• Opening markets abroad
• Creating the conditions necessary for growth
• Expanding access to capital