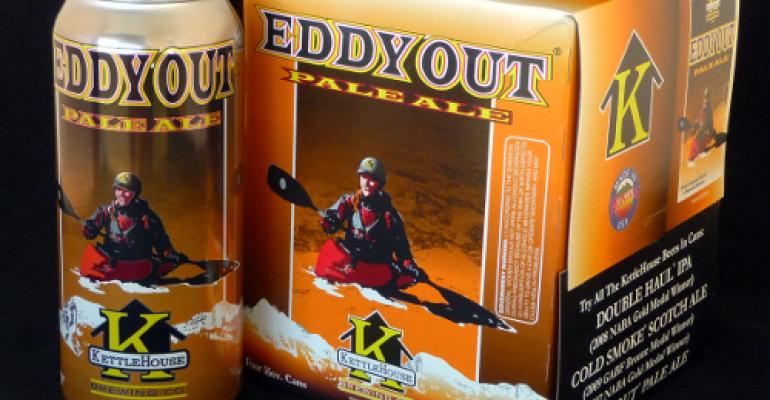 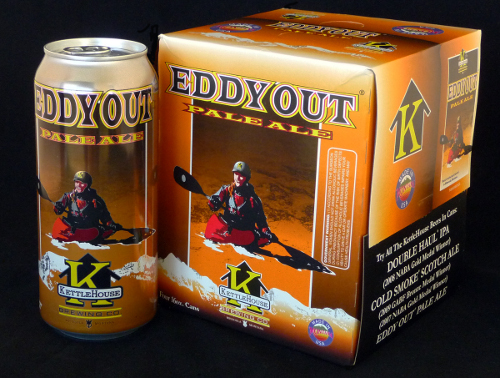 When the gang starts singing "100 bottles of beer on the wall, 100 bottles of beer," Kettlehouse Brewery takes them down and passes them around its local tap room, as well as in retail stores throughout western Montana.

Its home market is the college town of Missoula, but the company's chief story teller, a.k.a. founder and president Tim O'Leary, says its core customers are Montana lovers of the outdoors who want a quality beer they can take with them.

Kettlehouse's annual retail production is capped at 10,000 barrels of beer through agreements with its distributors and retail partners, so the company, which originated as a brew-on-premise enterprise in 1995, can continue to sell beer in its tap room. "As long as we're producing less than 10,000 barrels a year, we can sell up to three pints per person per day in our tap rooms. If we go above that, we have to give it away," O'Leary says. "I took one business class in my life. The rest I learned by hard knocks. One of the lessons I learned right away was—you can't make any money by giving your product away."

Even with a cap on production, demand for Kettlehouse beer has been high. "I haven't been able to get out of the brewery since we started canning because the demand has far exceeded our volume ever since," O'Leary says. 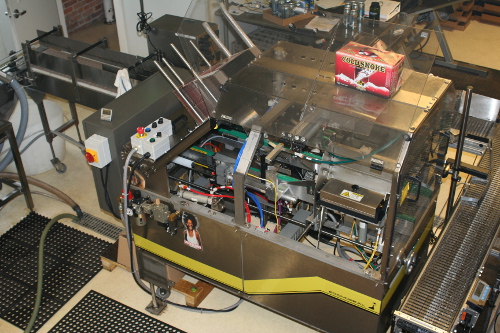 The company started packaging for retail sales in 2006 and outgrew its first hand canner from Cask Brewing Systems almost immediately. In 2009, it relocated to a larger facility and invested in the Cask Automated Canning System (ACS) it is using now, an indexing filler with CO2 prepurge. At that time, Kettlehouse was selling 4-packs in rings that were put together by hand so cans could be oriented to face out for a good look on shelf. That effort, O'Leary, says helped drive sales from the start but had an unintended outcome.

"That manual labor was costly and leading to some repetitive [stress] injuries," O'Leary says. So he invested in a new cartoner—a model E-2000 from Econocorp—that eliminates the hand labor and helps the brand maintain crucial shelf visibility.

"[The cartoner will] pay for itself in two or three years. It's already paid for itself in terms of ease of use for us," O'Leary says. "And the quality look that we developed with the new package has taken it to a higher level in terms of marketing appeal." 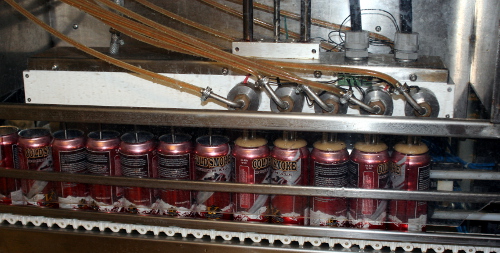 The little packaging room that could
Montana may be known for its wide open majestic spaces (it's called Big Sky for good reason), but there's little room inside the Kettlehouse operation. The packaging room is just 600 sq ft, down the hall from the brewery, which has about 10,000 sq ft of production space. Fermenting is done in the cellar and a 30-ft run of insulated pipes keeps the product cold from the tank to the filler.

The one-pint (16 oz) aluminum cans from Crown, Cork & Seal arrive in pallet tiers. Unloading is done on a platform about 10-ft up, where a layer is manually swept off onto a vibrating table for feeding to the line.

Cans are single-filed, then inverted for rinsing and sanitizing before being uprighted again for entry into the filler after a 90-deg turn in the line. Just prior to filling, an A Series inkjet coder from Domino adds a "Canned on" date below the lip of the can. Kettlehouse used to put a "Best by" date, but found that its beer had a longer shelf life and switched to the new phrase in the fall of 2010. O'Leary wants customers to enjoy the freshest beer possible so they have a positive experience and come back for more.

Cans are indexed into the Cask ACS filler (See a video of the system at www.packagingdigest.com/CaskFiller), which O'Leary says he chose for three reasons:

1. It was low cost—"Cask was so crucial to this [craft beer] movement. They designed an affordable machine for us small guys," O'Leary says.
2. It runs at the right speed (about 20 cans/min for Kettlehouse but able to reach 30 cans/min).
3. It has a small footprint (just over 10 x 2 ft). 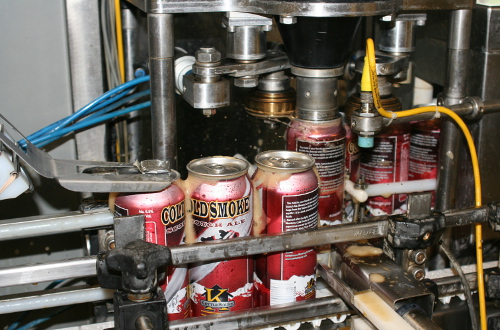 At the in-line filler, 10 heads come down at once: the first five are the CO2 prepurge to provide a blanket of protection from oxygen (15-20 ppb); the next five dispense the beer bottom-up to minimize foaming. Cans continue to the seamer, where they receive an injection of CO2 in the headspace before lids are placed. An airknife from Republic Sales & Manufacturing dries cans for subsequent multipacking.

At this point, the line turns right again and splits into four lanes for entry into the cartoner. All lanes are used when running the 8-pack in a 2 x 4 configuration. To create 4-packs (2 x 2), Kettlehouse sets up blocks on two lanes and diverts cans to the other open ones. Changeover for this takes about 30 to 40 min.

Like the Cask system, the Econocorp cartoner was chosen for its compact size (78 x 32 in.) and low speed. "The beauty of the Econocorp packager is the small footprint," O'Leary says. "And its speed wasn't too fast...or too slow. We can triple our canning speed if we had a faster canner and this machine would keep up."

Kettlehouse is first to use this cartoning system for beer. "There aren't many choices for craft brewers running small volumes," O'Leary says. "So many machines are meant to do 60 cases per minute or 100 or 200 cases per minute. We're doing less than one case per minute."

To keep its footprint small, the E-2000 uses its vertical space for the loading and gluing operations. Collated cans are raised (about the height of the 16-oz can) before being pushed into opened carton blanks, which are printed and supplied by Sonderen Packaging (who, O'Leary tells us, helped Kettlehouse find the Econocorp system). This machine design allows the next group to be gathered below rather than beside, saving horizontal space. Cartons are sealed with hot melt glue and a jig raises the finished pack up and out of the way while the adhesive sets. Again, this opens up space below rather than beside for the next carton to be sealed.

Sealed cartons are pushed out and slide down a chute to get back to waist level so a worker can reach them easily for manual tray packing. To get to their final packing station, cartons ride a conveyor from Safe Conveyor Inc., chosen for its small size and variable speed capability so Kettlehouse can "slow it down to our speed," O'Leary says. Along the way, cartons pass another Domino inkjet system, which prints the same "Canned on" date near the top edge of cartons.

A small-footprint tray former from Southern Packaging Machinery Corp. erects trays across the room, and a worker brings them to the packing area. The same size tray holds six 4-packs and three 8-packs. Loaded trays are manually placed onto wood pallets.

See a video of the Kettlehouse packaging line at www.packagingdigest.com/Kettlehouse.

Before installing the cartoner, Kettlehouse had up to five people manually packing and sealing cartons and loading multipack rings. But now the entire packaging operation is handled by two people. "If the line is running well and the beer is pouring well and not too foamy, someone can take a break for 45 minutes and one person can watch the line," O'Leary says, adding, "It's packaging. We'll get a goof in the line—a box won't open all the way or it'll crush a can-and we'll have to stop the machine and start all over. We've had a learning curve and made a few adjustments. But we can now go hours without a glitch." 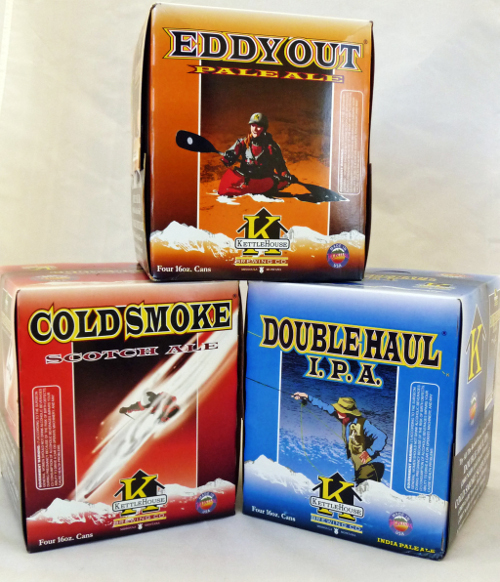 Growing pains
Because demand is so strong for Kettlehouse beer, though, O'Leary is at a crucial point in deciding whether to sit tight and pay off his investments or take on more debt to grow to the next stage: expanding the brewery and packaging operations.

"That's what I'm trying to figure out and why I've pulled ou the remaining few hairs I have.. We have had such demand that we've been telling distributors that we're going to have to allocate to them," O'Leary explains. "The Billings [MT] market has been crying for our beer and we can't send it over to them because then we would end up shorting our home market in Missoula."

Whatever he decides, the new cartoner, which is running at just 25 percent of its capacity, will be able to keep up. "We've had the canner for three or four years and it's been great," O'Leary says. "We're thinking we might buy another one that size and run them in tandem."

Beyond the production-cap agreement, there's another reason why this is a tough decision. "We're changing our business model if we do that. We're going from a small-distribution, neighborhood brewery to one that needs to now expand our distribution network out of state. I'd love to do that someday, but I want to do it without jeopardizing what we've already built."


AN UNBREAKABLE COMMITMENT TO CANS
Kettlehouse was one of the first 10 companies in the U.S. to package craft beer in cans and the first in Montana to do so. Quality factored into the decision: Light and oxygen are detrimental to beer, and aluminum is a good barrier for both, especially since Kettlehouse uses CO2 to evacuate residual air during packaging.

But the environment played a big role in two ways.

One: "My mom instilled in me a recycling ethic. We used to pick up cans on the roads to recycle and get money," founder and president Tim O'Leary explains, adding that aluminum is the most-recycled container for beverages. "It doesn't make sense to me to have throw-away packaging. A lot of people supported us because of our commitment to reusable containers."

Two: "It was sort of a selfish decision," O'Leary admits, "because I wanted to have my beer in my raft when I went boating and fishing. Aluminum makes more sense in that context than glass. Our mission statement is to match the quality of our beers with the quality of the Montana outdoor experience. Montana is full of like-minded people who want to go out and play on the river."