The case of the double vision 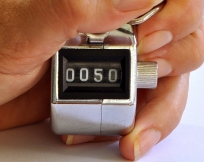 “My counter isn’t counting,” he told me.

“Perhaps it needs a brush-up in basic arithmetic?” I suggested.

“Don’t quit the day job for comedy. Get over here pronto.”

So I did. He had a productivity monitor on the line. In addition to the photoeyes monitoring line flow, they had installed photoeyes at each reject station to track rejects from each machine. The problem station had two rejects and two photoeyes connected together to provide a single count signal to the monitor.

Somewhere along the way the signal gets lost and the counter doesn’t register.”

It didn’t take me long to find the problem. “Fiddlesticks on lost signals,” I told him. “Watch what happens when I trigger both eyes simultaneously.”

I did and the counter incremented normally.

“Looks like whoever installed these eyes did not understand the requirements and wired them serially. Parallel logic will let either one send a count signal.”

“That’s an easy fix, KC. I’ll do it right now,” Mark said as he swapped a couple of wires.

Serial may be the breakfast of champions but in this case it just wasn’t logical.