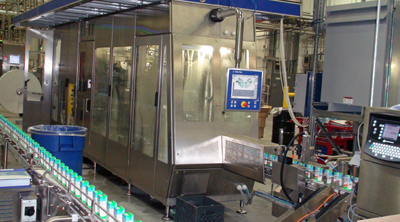 only co-packer in the U.S. western states that co-packs 125mL and 200mL high acid juice boxes for major brands using Tetra Pak. We started in 2010 with one TBA 9 line. We now have four lines, including the A3/Speed, which is Tetra Pak's fastest drink box machine."

David Yarmoff, svp of operations for Apple & Eve, is a happy customer of California Aseptic Beverages. He says, "We were constrained in the marketplace until we learned about California Aseptic Beverages. Its high-speed line opens up opportunities for us to expand. After we started working with CAB, we told our sales people that now we will have enough capability to produce the product we need to grow our sales.

"The other element of California Aseptic Beverages is its presi 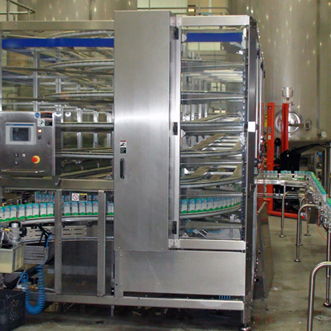 dent, Jeff McClelland. Jeff's character stands high among the many people in the industry that we work with. When he gives you his word, you can take it the bank. He keeps you in the loop when there are issues, and shares the excitement when things go right.

"Jeff is the type of entrepreneurial person that we want to be associated with. He is into cutting edge technology, and we are confident he will be in the forefront of developing new platforms."

The newest line at CAB features a Tetra Pak Model A3/Speed vertical form/fill/seal machine that produces the packages from flat film. The packaging material, which is a flexo-printed paperboard/foil/polyethylene laminate, also from Tetra Pak, is supplied in large rolls that yield 16,500 packages each. Two rolls are mounted on the side of the machine; one roll is running, while the second roll is ready to be automatically spliced to the first roll, when it runs out.

The material is pulled from the roll and travels up over the top of the machine and down into a sterilizing bath of 160 deg F, 32 percent hydrogen peroxide solution. A squeegee removes liquid peroxide, followed by a hot-air jet that blows off and evaporates the remaining peroxide. A thin plastic strip is applied to one edge of the web to form the longitudinal seal of the package.

The flat, sterile material then travels back up and over a roller at the top of the machine and begins its descent through the f/f/s sect 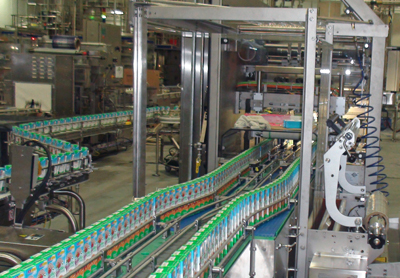 ion of the machine. As it descends, the material is wrapped around a metal forming tube, where the edges are sealed together to form the longitudinal seam. Next, the tube of film travels over a filling pipe that runs down its center. The liquid level inside the packaging material, which rises above the filling pipe, is regulated automatically to achieve the proper fill in the package. A servo control moves the material up or down in response to a photo electric sensor that reads a mark on the package.

The tube of film containing the product then travels into the closing unit, which consists of a vertical rotating turret with 10 sets of opposing jaws that form the tube into individual packages. As they travel around the wheel, induction sealers close the ends of the cartons, after which they are cut apart and the ends are folded and glued to give the packages their rectangular shape

The cartons discharge onto a horizontal conveyor as a continuous stream and are loaded onto vanes on a vertically rotating wheel that discharges them in a standing orientation onto a conveyor.

Packages leave the vf/f/s machine single-file and travel past a Domino North America inkjet printer that applies the date and product code, jaw number and line, and lot numbers to the tops of the cartons.

They then travel past an automatic sampling system that, at intervals set by CAB, diverts 10 boxes for inspection. The system selects boxes coded one to 10 by the printer, reflecting the 10 sealing jaws on the vf/f/s machine.

The packages then travel to a Tetra Helix spiral accumulator manufactured by Hartness Intl. Inc. This first-in/first-out unit provides four minutes of accumulation time with a total accumulation capacity of about 1,600 packages. In this operation, parallel, independently driven infe

ed and outfeed conveyors run in opposite directions through the unit and are mechanically linked by a free-floating gear, or package-transfer mechanism, dubbed the "spider."

When the system is operating normally and both conveyors are operating at the same speed without package backups in either direction, entering packages encounter the spider and are transferred directly to the discharge conveyor.

Conversely, when the out feed conveyor is running faster than the infeed, it begins to empty, so the spider travels down the spiral as it transfers bottles from the infeed to the outfeed conveyor. 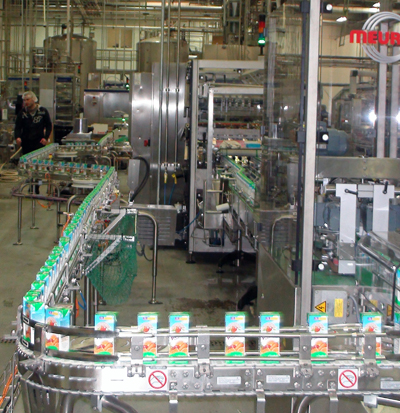 ween boxes and adjusts the speeds of the conveyors to maintain a gap of 1/4 in. between the packages in the unit. If the accumulator fills completely, the control system shuts off the filler.

The downstream equipment is designed to run 25 percent faster when packages back up in the accumulator, so when the line starts up after a downstream stoppage, it will slowly empty the accumulator. When the packages in the accumulator reach a sensor near the outlet of the unit, the downstream equipment is slowed to the filler speed.
Following this, the packages travel to a Tetra Pak Model 30HS straw applicator that glues film-wrapped plastic straws to the drink boxes. The straws are supplied in a web that passes through a heating unit that heats the web to soften and straighten the straws.

The machine cuts straws from the supply web and applies hot melt glue from a Nordson Corp. 3100V unit to each straw and places it against the back of the corresponding drink box. Pressure pads that move with the cartons help glue the straws to the packages. A camera after the straw applicator inspects each carton for missing straws, and any such cartons are automatically ejected from the conveyor.

At this point, the drink boxes can travel to two locations: a Meurer Model CM-HHS horizontal flow shrink-wrapping machine that groups eight cartons into a 2 x 4 package or a Meurer Model CM-HTW tray packer that places the individual cartons and eight packs onto trays.

Cartons to be shrink wrapped are conveyed single file into the CM-HHS wrapper, where a pivoting feeder separates the cartons into two lanes as they enter. They are separated into eight-pack groupings and a printed J-card is wrapped horizontally around them.

Film is supplied from a roll on the side of the machine and is pulled over a 45-deg roller so it is traveling contiguously with the cartons. A pusher moves the packages into the wrapper and pushes them through the descending web of film, after which a jaw cuts the film and a rotary sealing unit welds the two ends of the plastic together.

The wrapped package is pushed out of the sealing area by the following group and is conveyed into a heating unit where hot air blows onto the sides of the package to shrink the film tightly around the cartons.

All axis on the machine are servo driven, and it is controlled through a touch-panel menu-driven HMI that provides clear operator and maintenance instructions.

The wrapped eight-packs of cartons then travel to the CM-HTW tray packer, where a pivoting feeder separates the packs into lanes as they enter the unit. CAB runs wrapped cartons in 32- and 40-unit trays. The feeder diverts cartons into four lanes for 32-packs and five lanes for 40-packs. In each case, the proper number of eight-pack groups is moved onto a tray blank of corrugated board.

Front and back flaps are folded up against the cartons, after which the side flaps are folded into place and glued with hot-melt adhesive. The unit features a multi-axis system with servo drives and touch-panel HMI.

Cartons that are to be tray packed individually are diverted after the straw applicator and travel directly to the CM-HTW packer. In this case, the pivoting arm directs the cartons into six lanes and 36 cartons are loaded onto a tray blank. The system then progresses as describe previously.

The trays discharge onto a conveyor that transports them past two Marsh inkjet printers from Videojet Tech¬nologies Inc., that apply date, product code and line and lot numbers to both sides of the tray, and then delivers them to a Meurer CM/HEM 60 high-speed tray wrapping machine.

The tray travels though the film, which is pulled back beneath the tray and is heat welded to the entering web, after which the film is cut. The trays travel through a heat tunnel, where the film shrinks tightly around them, after which they are manually palletized.

The entire line is controlled from a cabinet with a touchscreen HMI located after the f/f/s machine. All of the conveyors are equipped with variable-frequency drives, and an operator can set all of the conveyors and machines to run at 266, 333 or 400 carton/min by selecting the speed on the line controller.

Each machine on the line has its own dedicated Allen Bradley programmable-logic controller and HMI from Rockwell Automation.

These machines operate in a "double-handshake" mode in which each 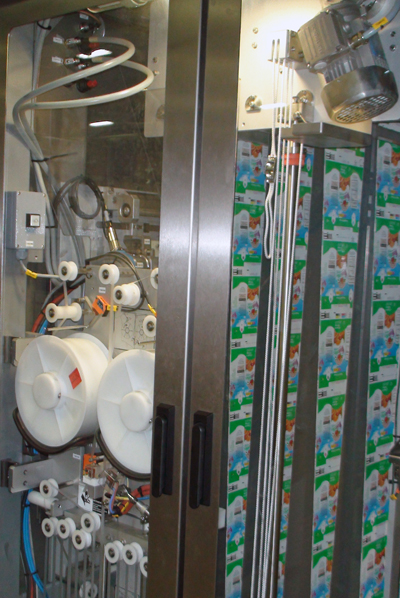 machine tells the machine before and after it, over the Rockwell network, that it is or is not running. The machines start and stop in accord with these messages and, in turn, send the information to the next machine in each direction.

The line incorporates Tetra Pak's Packaging Line Monitoring System (PLMS), which tracks the performance of the complete packaging line. The system collects operating data for each machine and the line as a whole, such as running and downtime, reason for a shutdown, package output and other information, and transmits it every five seconds over the Rockwell network.

The PLMS also has a historical-analysis tool that can identify malfunction causes in the packaging line and a performance-analysis program that generates graphs and reports. All information from the monitoring system is sent to a separate line controller, which serves as the collection point. It then transmits the data, also over the Rockwell network, to other PCs in the plant. The data is also transmitted in real time to the Tetra Pak headquarters, where experts can provide advice and troubleshooting if it is needed.

California Aseptic Beverages' growth in only two years is truly remarkable, but as the saying goes, "You ain't seen nothing yet." The company will install Tetra Pak's Tetra Classic Aseptic machine this summer and is planning on a second Classic line after the first of the year. This will be the first Tetra Classic Aseptic machine in North America. And not only will it be a unique new package, but the line will incorporate cutting edge robotic end-of-line technology.

Watch for it in a future issue of Packaging Digest.