The game is on the line 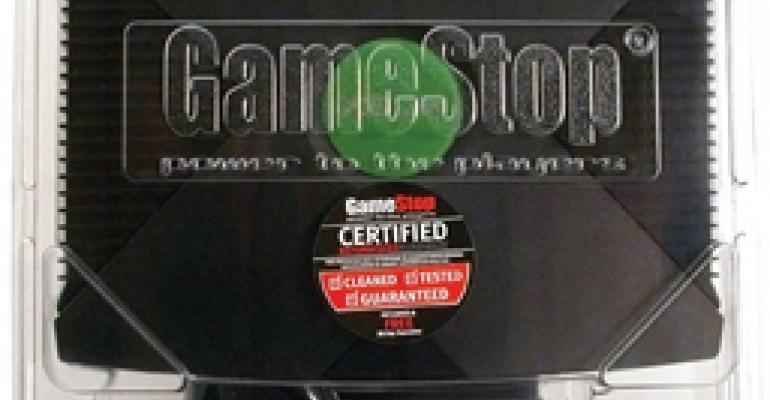 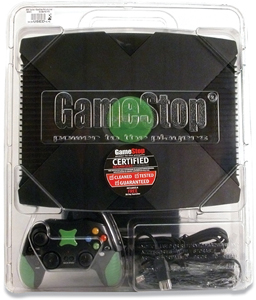 GameStop™, the world's largest video game retailer, is a $7 billion company with more than 5,000 stores worldwide. A key feature of its operations is its refurbishment of used games and systems that its stores take as trade-ins when customers buy new systems. The company completely updates these games and systems with new software and components and resells them in its stores. This refurbishment takes place in a section of GameStop's 500,000-sq-ft headquarters and distribution center in Grapevine, TX, near the Dallas/Ft. Worth airport.

The refurbishment operation initially consisted of manually assembling the components in a corrugated box with foam padding, after which the boxes were hand-packed into shipping cases. In 2004, facilities director Dan Toomey began looking for a more efficient operation. After examining possible options, Toomey approached Partner Pak, Inc. (www.partnerpak.com) about its Simpl-Seal® technology, which uses liquid plastic that is solidified by UV light, to seal the product in clamshell cases. In 2006, he installed a Simpl-Seal system to run relatively small clamshells. This proved successful, and last year Toomey installed a more elaborate system to run larger clamshells, such as those that house the Microsoft Xbox 360 gaming systems, which are about 18x17x4-in. high. “We were doing everything manually, which took a tremendous amount of labor,” says Toomey. “I saw Partner Pak at a show, and their system looked so promising that I decided to try it on a line that packaged small memory cards for games into clamshells. I wanted a robot to apply the adhesive and servo drives to make size adjustments easier, and Partner Pak incorporated both of those items into their system. This system worked very well and the recycled polyethylene terephthalate clamshells were so much more attractive than our previous packaging that we then decided to install a line for the bigger clamshells.”

In this operation, workers in a separate room manually place the game components, which consist of consoles, controllers and accessories, into RPET clamshells from Portage Plastics Corp. (www.portageplastics.com). These clamshells presented a challenge, because their side flanges had to be able to support up to 18 lb as they travelled through the Simpl-Track™ workstation, and they had to be formed to meet sealing requirements. GameStop learned about Portage Plastics from Metro Automation (www.metroautomation.com), which is one of GameStop's regular suppliers. Metro is a stocking distributor for Portage Plastics, and supplies the clamshells to GameStop on a just-in-time basis. After the game components have been assembled, the open clamshells are conveyed along dual tracks to the Simpl-Track workstation. Bastian Material Handling (www.bastiansolutions.com) was responsible for integrating the entire operation and supplying the conveyors, which were manufactured by Hytrol Conveyor Co., Inc. (www.hytrol.com) [see the accompanying sidebar].

Sensors at the inlet of the workstation set the pace of the sealing operation, and two Model E2S551S robots from Epson Robots (www.robots.epson.com) accurately apply adhesive to the grooves in the bottom section of the clamshell. “I wanted robots for this process right from the beginning, but they were always too expensive for our budget,” says Toomey. “Then Epson Robots came in with robots that we could afford and that got the project off the ground.” The robots, which are mounted on opposite sides of the clamshell, incorporate nozzles with brushes that apply the adhesive and ensure proper coverage. Both nozzles travel in a clockwise direction, which ensures that they will not interfere with each other. The clamshell next passes through a section of the workstation where air jets blow the top up, over and onto the bottom section. The clamshell then travels past roller/crimpers that press the top firmly into the adhesive-coated grooves in the bottom section. After the clamshell is closed, it is conveyed through the UV light tunnel that cures the liquid plastic and invisibly bonds the top to the bottom. The UV light is located midway in the tunnel, under a stainless-steel mesh conveyor belt. Actual sealing time is about 0.2 sec, while time on the conveyor varies, based solely on conveyor belt speed. “Partner Pak did a great job for us on this project,” says Toomey. “I didn't want radio-frequency sealing or anything else that might affect the electronics of the game in the package, and Partner Pak's UV light curing eliminated the possibility of any problems. Partner Pak was excellent to work with. They were very receptive to everything we brought up during the project, and were here to help us during startup.”

GameStop is currently running a number of different-size clamshells on the line, and the Simpl-Track Workstation incorporates a touchscreen human/machine interface that has icons on its screen to represent each of the clamshells. An operator touches the icon of the clamshell to be run, and servo drives instantly and automatically reconfigure the workstation to accommodate the selection. In addition, the motion of the robots is reset. Partner Pak designed, engineered and programmed the robotic interfaces, adhesive dispensing, servo-drive reconfiguration and the HMI. Epson Robotics provided the robots and training. The robots, de-nester and servos operate and communicate via a single Epson controller that was programmed by Partner Pak. “The automation was a challenge at the beginning, but it is well worth the effort,” says Toomey. “The operator just touches an icon on the screen and nearly all of the adjustments are made automatically. There's no guesswork and no manual adjustments.” 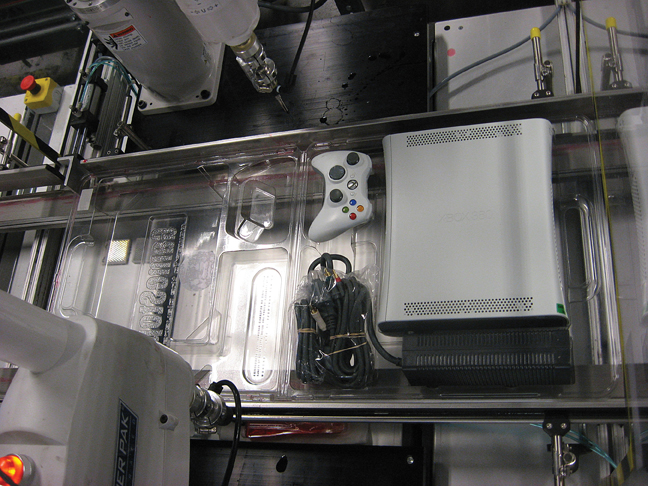 The packages exiting the sealing tunnel are then conveyed to a servo case packer from A-B-C Packaging Machine Corp. (www.abcpackaging.com). “We have a lot of equipment in the plant from A-B-C Packaging Machine Corp., and this servo-driven machine fits right into this automated line. As with the clamshell sealer, the operator just selects the product he's running on the HMI, and the machine adjusts itself to run that package,” Toomey says.

Just ahead of the case packer, there is a switch that the operator can initiate that will divert selected clamshells from the conveyor. Remaining clamshells enter the infeed conveyor of the Model 206 end-loading case packer from A-B-C Packaging Machine Corp. GameStop stacks two or three clamshells on top of each other to load into the shipper, and this, plus the large case/product load, required a custom accumulation and load section. When a clamshell arrives at the packing station, a plate descends behind the clamshell to hold back following packages. A product pullback system prevents the clamshells from overlapping or shingling as they assemble at this accumulation station. The bottom plate then opens and allows the clamshell to drop onto a lower belt. The back plate then rises and allows the next clamshell to enter the packing station and the same thing occurs. If the plant is running smaller clamshells, a third clamshell will be added to the stack. The belt holding that lower stack then indexes forward, and the process is repeated.

Simultaneously with the belt containing the clamshell stacks, vacuum cups on a rotating arm pick cases from a magazine and erect them onto a conveyor moving parallel to the clamshell conveyor with an open end facing the clamshell conveyor. As the two conveyors travel synchronously, a ram pushes the clamshells into the case, after which hot-melt glue is applied to the end flaps on both ends of the case. The flaps then are plowed shut. This compact, programmable-logic-controlled case packer features servo motors for the main case drive, an infeed, a down stacker and a load pusher, and an HMI that enables an operator to select the product running from an onscreen menu and sets the afore-mentioned servo motors for each package.

The shipping cases leaving the case packer are conveyed to an A-B-C Packaging Machine Model 72 AG floor-level palletizer. Finished pallets of product are wrapped by a stretch wrapper from Orion Packaging Systems (www.orionpackaging.com). “This new line has been a real success for us,” says Toomey. “Not only are the clamshells much more protective and better looking than our previous packages, but the new line has significantly reduced labor. All of the suppliers worked extremely hard to bring everything together and meet our schedule.”