Global aseptic packaging to grow 24% in next five years 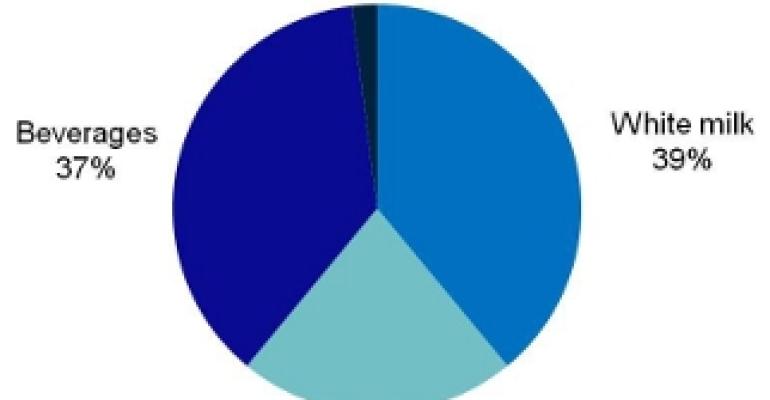 The world market for aseptically packed products amounted to 123 billion liters in 269 billion packs during 2011, according to the new Global Aseptic Packaging report from food and drinks consultancy Zenith Intl. and packaging experts Warrick Research. Volumes have grown by just over 5 percent a year since 2008, with South/South East Asia achieving the fastest rise at 22 percent a year.

White drinking milk accounts for 39 percent of aseptically packed products, with beverages responsible for 37 percent and other dairy or food products making up the remainder. Aseptic filling has yet to make a significant impact in food markets, but there are some established niche applications—sauces, tomato products and baby food are important new areas of development. 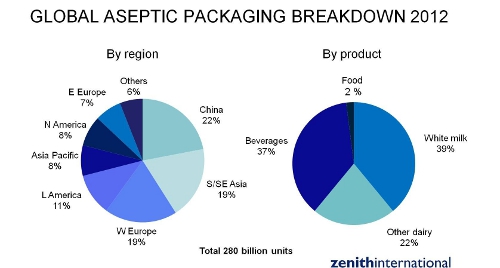 "The market for aseptic packaging developed in Europe and the industry supplying it has been centered on Europe. This report shows the market shift to Asia in the past four years and raises the prospect of this continuing in the next few years," comments David Warrick, director of Warrick Research Ltd.


"At a time of economic recession in much of the world, the aseptic packaging market has grown at over 5 percent a year in the past four years as the technology is well positioned to supply the needs of new markets and applications," adds Esther Renfrew, market intelligence director at Zenith International Ltd.

Other findings of the 2012 Global Aseptic Packaging report include insights that:

• The largest regional markets for aseptic packaging are set to be China and South/South East Asia both overtaking West Europe as the former largest region.

• World use of aseptic packaging has reflected global economic trends. Usage has been static in much of Europe, while there has been rapid growth in many countries across Asia.

• Value added dairy products will be a fast growing area of demand for aseptic filling systems. In some regions, fillers are used for both ambient and chilled products.

By 2016, Zenith and Warrick estimate that the world market for aseptic packaging will reach 153 billion liters using 333 billion packs. The majority of additional demand will come from South/South East Asia and China, where growth is forecast at 11 percent a year and 3.5 percent a year respectively.

The 2012 Zenith & Warrick Report on Global Aseptic Packaging contains 668 pages, including a detailed study of aseptic packaging use in 35 countries for milk, beverages and other products (with 2008 and 2011 data, and 2012 and 2016 forecasts) and a technical report on aseptic processing and packaging (including technical developments and profiles of more than 40 aseptic filling equipment suppliers).