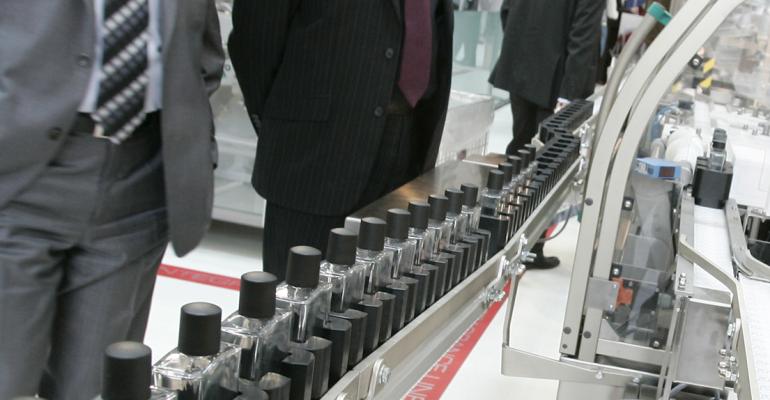 Every three years, Interpack gives international packaging machinery buyers a chance to evaluate technologies and competitors on a global stage. This year, 10 of the 19 halls will showcase the latest processing and packaging machines developed by exhibitors from 60 countries. Whether you are in the market for new systems or are simply keeping up with technologies to benchmark your operations, conditions are ripe for finding just what you want. 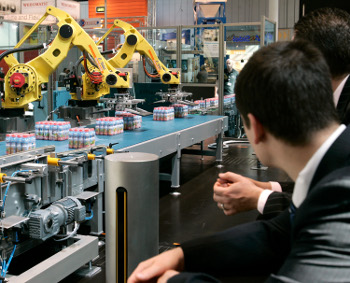 So what are most machinery buyers shopping for? Leading the list are systems that deliver efficiency, flexibility and—ready for this?—sustainability (described as energy efficient and producing less product/packaging waste during operation).

Granted, this list isn't much different from recent years, but the intensity has notched up for each factor, especially the last. Technology advances continue to evolve, with incremental improvements more prevalent than any quantum leaps, though. (Look for more about desired packaging machinery features at the end of this article.)

Birds' eye view
For this article, we researched data from multiple sources to get the overall view of the global packaging machinery market. All sources are identified and, in what we see as a good sign, they agree more often than not.

It's still early for final figures for 2010. So most of the data here is for calendar year 2009, which (admittedly) was not a normal year because of the global recession. We can just about assume that numbers for 2010 and beyond will trend up in comparison, especially when you consider that current economic indicators are more positive than negative.

For example, in January 2011, the Conference Board—the non-profit business group that each month releases the Consumer Confidence Index—reported that the world economy had returned to solid productivity growth in 2010, as GDP in most countries recovered strongly from the 2008/09 financial crisis. One caveat, though: Employment still lags.

A month later, the Conference Board also announced that U.S. consumer confidence jumped in February 2011 to its highest point since February 2008. Based on data from the Conference Board, the Los Angeles Times reported that "February's 70.4 rating, up from 64.8 percent in January, still is well below the reading of 90 that indicates a healthy economy. But the new rating is a major improvement from the record-low of 25.3 it hit in February 2009."

This rise in consumer confidence is fueling a bump in retail sales in the U.S. In March 2011, Bloomberg reported that retail purchases (excluding autos, gasoline and building materials, which are the figures used to calculate gross domestic product) increased 0.6 percentin January 2011 for a second month in a row), based on data from the U.S. Commerce Dept. And, also in March 2011, the Commerce Dept.'s Census Bureau announced that retail sales grew by 1.0 percent in February, described as "a strong monthly gain." This was the eighth consecutive monthly increase in retail sales.

Some of those gains came from clicks rather than bricks (that is, physical stores). In January 2011, Internet Retailer reported: "E-retailers closed the year with record holiday season sales that were up more than 15 percent from 2009, according to MasterCard Advisors, the consulting arm of the payment card network that tracks retail sales across all payment forms."

According to the U.S. Commerce Dept., e-commerce represented 4.2 percent of total retail sales for 3Q2010. But Internet Retailer says that percentage is too conservative. When excluding sales in categories not commonly bought online—automobiles, fuel, grocery and foodservice sales—Internet Retailer calculated that e-commerce accounted for 7.5 percent of retail sales during that quarter.

In 2011, more e-retailers are likely to develop global sales strategies, as they realize that they're not confined by borders. How this will change global Internet retail sales is still unknown.

It's tougher to get retail sales data for countries outside the U.S. Looking at the world's largest retailer, though, gives us some insight. In a press release about 4Q2010 results, Walmart Stores Inc.'s president/CEO Mike Duke said, "Walmart Intl. continues to be our growth engine, and we expect accelerated growth in emerging markets.

International net sales exceeded $109 billion this year, an increase of more than 12 percent over the prior year. Every country contributed a sales increase in fiscal 2011, compared to the prior year." (Walmart's fiscal year runs from Feb. 1 through Jan. 31 each year, so these numbers reflect most of calendar year 2010.)

Consumer confidence is up; retail sales are up. No wonder CPGs are ramping up, too. According to Mintel's Global New Products Database, the number of new Food and Beauty & Personal Care products launched around the world saw decent upticks in January 2011 (see chart on p.8). These top two categories accounted for about 18,000 product introductions this one month alone. Now, the number of new products doesn't necessarily equate to an increase, respectively, in production volume, but you get the picture. Things are looking up. (Not to be a negative Nelly, but keep in mind that earlier caution about jobs.)

Deep dive
More buying means more making. And that brings us back to the positive outlook for the global market for packaging machinery. The accompanying table, charts and graphs illustrate pieces of the total market, including shipments and/or demand by region, by end-use market and by type.

VDMA, the German trade association of food processing and packaging machinery, says world trade in packaging machinery has increased continuously for years, reaching a volume of 14.6 billion Euros in 2008 (about US$20.6 billion at today's exchange rate). The recent Great Recession dampened demand, and exports briefly declined in 2009. But the industry expects numbers from 2010 will show a more robust market gain.

According to the Commerce Dept.'s Intl. Trade Administration (ITA), the global market for packaging equipment for 2009 was estimated to be nearly US$25 billion.

Freedonia estimated US$28.6 billion in packaging systems sales for 2009 and projects a respectable rate of growth from there: "Global demand for packaging machinery is projected to rise 4.7 percent annually through 2014 to $35.9 billion, an improvement over market growth during the recession-impacted 2004-2009 period. Sales growth will be driven by an acceleration in manufacturing output, as well as by a favorable fixed investment environment worldwide."

Most optimistic of all are projections from Global Industry Analysts (GIA), which estimate the global packaging machinery market for 2010 at US$32.5 billion and forecasts sales to exceed US$40 billion by 2015, with demand from developing markets to likely drive the most growth.

By region
The MPI Group reports that, although manufacturing plants around the world continue to operate below capacity, nearly half of them plan to increase spending on capital equipment in 2011.

According to The MPI Group data of 334 U.S. facilities and 145 plants from around the world, international beats U.S. demand and will continue to do so. "International plants spent significantly more on capital upgrades than U.S.-based facilities in the past year [2010]—10 percent of plant revenue (median) compared to 3.1 percent (median) at U.S. plants. Further, the spending gap looks to continue through 2011, with 55 percent of international plants planning to increase capital spending, compared to 44 percent of U.S. plants."

Freedonia and GIA agree that the driving force behind the growth of packaging equipment sales will be because of gains in emerging nations, specifically (GIA says) Asia-Pacific, Latin America and the Middle East. GIA explains that this is "due to accelerated industrial demand, rapid expansion of food processing and consumer durables sectors, and burgeoning foreign investment in local production facilities." 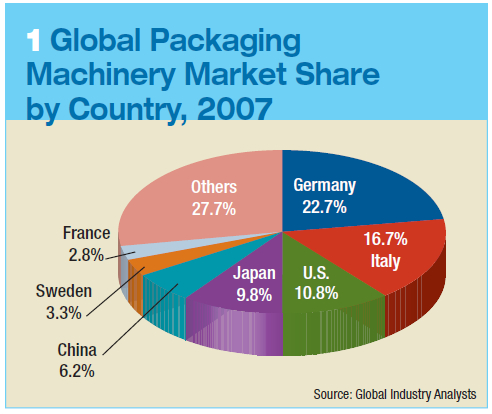 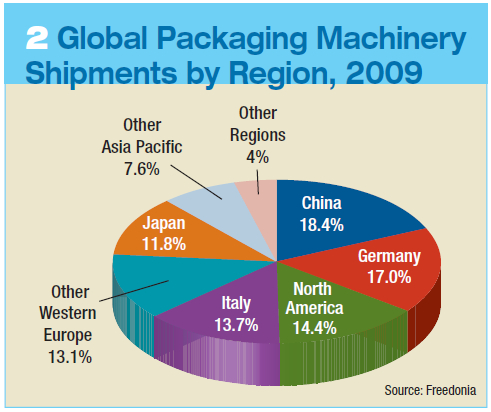 Move ahead to 2009 and Freedonia reports a slightly different order with China on top with 18.4 percent of global shipments; Germany follows at 17 percent and North America is next at 14.4 percent (see chart #2). By region, though, Freedonia's numbers add up this way: Western Europe, 43.8 percent; Asia Pacific, 37.8 percent; North America, 14.4 percent; and Other Regions, 4 percent.

Competition is truly global, as the export picture shows. According to VDMA, Germany's share of world exports was 34 percent, for a volume of around 4 billion Euros in 2009 (about US$5.6 billion based on current exchange rates), down about 25 percent from 2008. The U.S., Russia and China (respectively) are the most important markets for German exports.

In comparison, exports of Italian packaging machinery were approximately 96 million Euros in 2010, according to Messe Düsseldorf North America, sponsors of Interpack. And PMMI—the North American trade association for processing, packaging and converting equipment whose mission is to improve and promote members' abilities to succeed in a global marketplace—puts exports from the U.S. at 17.5 percent in 2009. 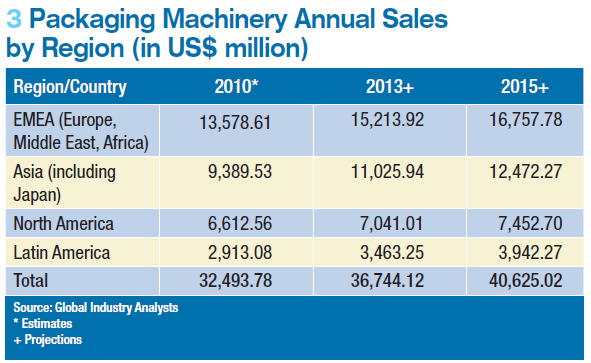 Freedonia predicts that food will account for 43 percent of all sales worldwide by 2014, but beverage will post the fastest gains, averaging 5.3 percent growth annually through 2014. This is not surprising considering there may be 9 billion people living on our planet by 2050, and they will all need to eat and drink.

According to VDMA, "The food and beverage industry is a robust economic sector worldwide, with high investments, and is one of the largest purchasers of packaging machinery, with a share of 60 percent. The pharmaceutical industry is also less subject to economic fluctuations, since people have a fundamental need to be supplied with basic medicines. This industry purchases around 20 percent of all packaging machinery." 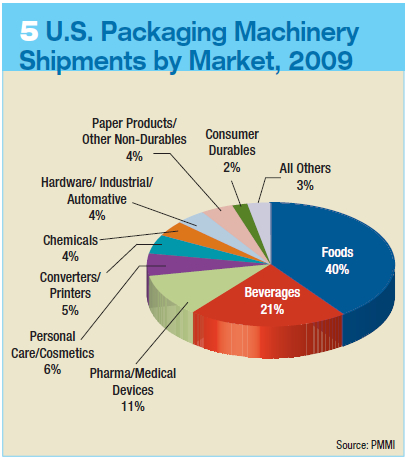 Showing a consensus among the various groups, these 2009 "demand" percentages in the world market pretty much match 2009 "shipment" numbers from PMMI in the U.S. (see chart #5).

By type
The types of machines most in demand reflect some of the recent shifts in consumer preferences and trends in sustainability. GIA, for example, cites a need for flexible packaging machinery (that is, pouch/bag makers) that can handle a variety of, in many cases, source-reduced packages.

Freedonia also predicts that the top category in demand—fill & form/fill/seal—will also be the fastest grower, at least through 2014 (see chart #6). 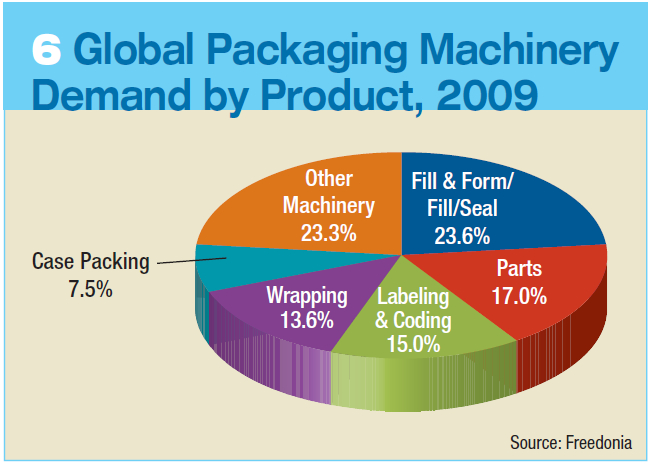 And PMMI data on 2009 U.S. shipments by machinery type puts fill & form/fill/seal equipment (US$773 million) second only to conveying systems (US$930 million), which are ubiquitous in nearly every packaging operation, certainly for all automated lines.

Looking ahead
We expect machinery buyers worldwide will continue to look for multi-functional systems that deliver, as PMMI says, "greater operating efficiency, changeover at the push of a button, lower energy consumption, a decrease in waste and a reduction in labor. All at an affordable price."

VDMA specifically mentions that the decreased energy consumption of systems using distributed servo technology will be attractive to packaging operations. GIA sees a trend in the use of more servos, too, as well as more networking architectures and robotics.