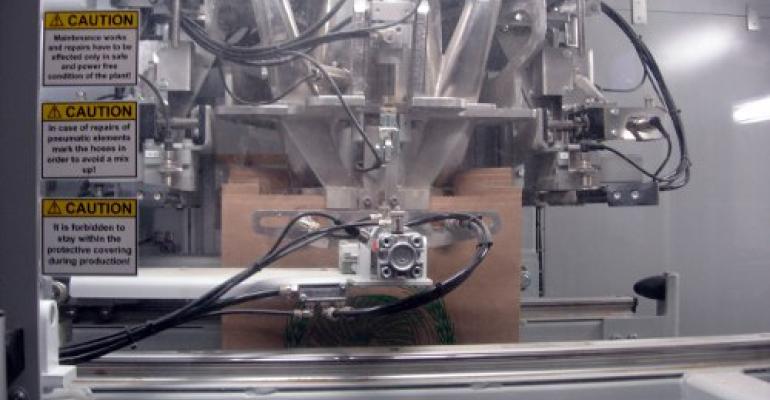 The Topline bagging system takes an empty bag from a preassembled bundle, fills it to its specified weight and ends the process with densification and sealing of each bag. 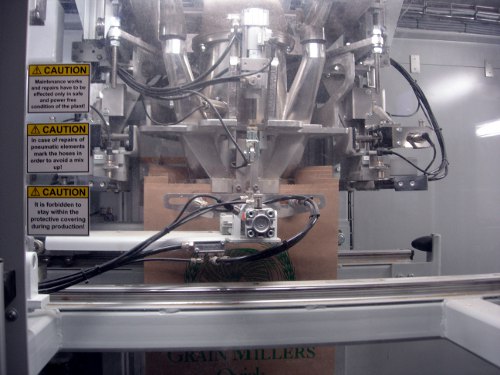 There's tired and there's down for the count. Eugene, Oregon-based grain processor Grain Millers Inc. was both before changing bagging machines. Today, with an automated machine on its floor and workers who no longer have to break their backs to get the bagging job done, Grain Millers increased its production by about 40 percent.

Grain Millers has been packaging conventional organic whole grain products for more than 30 years. These grains are used in baked goods, breads, cereals and a range of other products served around the world.

Getting the grains from raw commodity to finished product is a long process, one that involves several steps before packaging. From flake rollers and dryers to vibratory trays and bucket elevators, Grain Millers relies on several machines to come together and create a smooth, cohesive process. "We operate a closed loop system," says Tony Selby, Grain Millers' plant manager. "Basically, it means we're able to connect each piece of machinery together so we don't interrupt the flow and disrupt the progression of steps."

Each machine is important, but the key to the entire Grain Millers system is in the final step—packaging. Grain Millers now accomplishes this key step with the Topline bagging system from the Behn + Bates brand of Haver Filling Systems.

Before Grain Millers had a Topline, its people were shouldering all the weight in a manual bagging system. The strain was beginning to show, not only in the workforce but also in the company's bottom line. The manual system required operators to move bags that weighed anywhere from 25 to 50 pounds, weigh each bag to ensure accuracy, take the bag through heat sealing and, finally, place it on a pallet.

"It was a tedious and extremely tiring process," Selby says. "It really took expertise to properly run the manual machine, and it was extremely labor intensive work."

The physical strain left operators fatigued, often with sore arms and backs. In addition, the system required two or three operators at any given time. In a typical workday, operators would rotate out and take frequent breaks to keep fatigue at a minimum. That created another problem. The constant pauses and downtime meant inefficient production and lower bag filling rates.

The Grain Millers team knew it needed to find a solution, one that would increase production efficiency by decreasing labor requirements. The company's research led to the Topline. "It seemed like we just lucked out finding the Topline," Selby says. "We communicated our needs to several manufacturers and asked them to let us know how their bagging machines could meet them. At the end of the day, we couldn't find a system that fit what we were looking for better than the Topline from Haver Filling Systems."

Top of the line

The automated system accomplishes the entire bagging process from product weighing, to filling and finally bag closure. "It's really a remarkable system," Selby says. "One of our biggest challenges had been finding operators who could run the labor-intensive system, both from the skill level required and the physical demand. When we saw how easy the Topline system was to operate, we were pretty much sold."

With more than 125 years of expertise in the packaging industry, Haver Filling Systems had extensive knowledge and experience, which initially attracted Selby and his team. When they took a closer look, they discovered Haver was a true leader in developing technology for greater production efficiency and ease of operation.

The Topline weighs the product, fills the bags and seals the filled bags and, best of all, requires only one operator to oversee the process and stack empty bags into the automatic bag placer. Product flows into the machine through a hopper system. Once inside, the Topline takes an empty bag from a preassembled bundle, fills it to its specified weight and then ends the process with the densification and sealing of each bag. From there, an optional robotic system takes the bag from the Topline machine and places it on the pallet for shipping. The system works quickly and requires little manual labor by the operator.

To further ease operation and increase efficiency, Haver also equipped Grain Millers' system with its Haver MEC weighing control system, which acts as the machine's brain. Haver engineers have programmed the MEC with weight and specifications of every grain the company bags. Whenever a product or bag size is switched out during a shift, the operator simply needs to enter the new product ID number and the machine automatically adjusts to the specified product.

The MEC ensures the Topline is filling each bag to the exact weight specified for each product. The system works by controlling a gate that allows material to flow into a netweigher. Once the netweigher is filled to the designated weight, the gate closes. Flaps from the netweigher open to a filling spout and the grain flows into the bag. If the netweigher is inaccurate, the MEC will pause production until operators address the problem—an issue Grain Millers has yet to encounter.

"Grain Millers processes so many different types of products throughout the day, so this has been an incredible time saver," Selby says. "It's the most consistent scale I've ever seen in my life. If you need a 50.1-pound bag, you are getting a 50.1-pound bag every time."

Haver worked side by side with Grain Millers, not only in equipping the Topline with the MEC, but also customizing the entire machine to fit the existing feed conveyors and hopper system. "The entire transitional process went very well," Selby says. "A guide from Haver came in, installed the machine and trained us. He went through basic operation and maintenance, as well as recommended spare parts to keep on hand."

Since the transition, Grain Millers has seen a decrease in downtime and increases in production and accuracy. Rather than two to three operators doing hard labor, now only one is required to simply oversee the operation. Grain Millers has been using those workers in other areas of the facility for other tasks, which has made the company even more efficient and productive. Production rates have gone from four to five tons an hour to six to seven tons an hour. Production rates are up to approximately 54,000 tons per year, about 40 percent higher than the 38,000 tons Grain Millers was processing annually prior to getting the Haver system. At the same time, weekly maintenance time has gone down significantly, from six hours a week to only two.

"We like to do weekly maintenance to ensure all the parts are working properly, rollers are oiled, those types of things," Selby says. "But with the Topline, we do it simply as preventative maintenance to make sure the machine continues to run smoothly."

In addition to weekly maintenance checks, the control panel also "supervises" the system's operation to ensure everything is running smoothly and prevents potential maintenance issues. If a part isn't working properly, the control software sends a signal to the bagger to pause until the issue has been addressed. Operators can check on the issue immediately, before the entire system is potentially thrown off balance and significant downtime results.

"The Haver system really seems to do it all. We couldn't be happier with our decision," Selby says. "We're working the same hours, but we're able to produce two to three tons more every hour. It's really made a difference in our operation."