Group puts its money where the mouths are 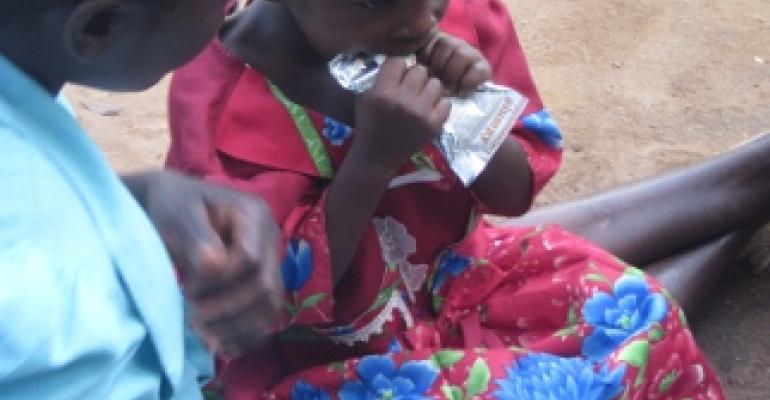 Kids can eat directly from the pillow-pack sachet or moms can spoon-feed them. 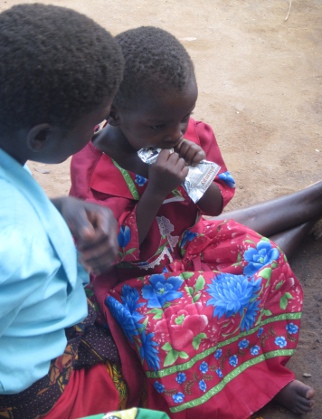 When you're giving food away for free or at cost, the lower your production costs, the more good you can do.

Peanut Butter Project (PPB), an NGO based in St Louis, MO, treats severely malnourished children in Africa with a peanut-based product similar to peanut butter that provides all their nourishment needs. The ready-to-use therapeutic food (RUTF) is provided to clinics for free or is bought at cost-recovery prices by various charities, including UNICEF and Doctors Without Borders, which then give it to those in need at no charge.

Local production is central to the success of the program for a couple reasons. Mardi Manary, administrator of PPB, explains, "We saw the establishment of local factories as a way to make the RUTF sustainable. We buy as many of our raw materials and supplies in country, and we use the national health system to distribute the RUTF, rather than setting up parallel systems."

This holds down costs and adds an element of ownership and self-sufficiency. After PPB sets up the operation and gets it running smoothly, it turns the factories over to national staffs. "The idea is that it becomes theirs," Manary says. "We don't want this to be run by white people or expatriates. We want it be owned and a part of the national identity. ‘This is our food saving our children.'"

The project started in Malawi in 2001—with remarkable results. The recovery rate of severely malnourished children improved from 25 percent to 90 percent. "We know it works," Manary says. "The U.N., the World Health Organization, the World Food Program say this is the standard of care. This is how you treat severe malnutrition."

PPB's goal is to establish national programs throughout the country. In September 2010, it expanded to Sierra Leone, which four years ago was decimated by civil war financed through sales of Blood Diamonds. "They still don't have 24-hour water and electricity in the country, and yet we built a state-of-the-art factory," Manary says (more about the Sierra Leone operation in a minute).

By manufacturing and packaging the product close to the point of need, PPB has been able to help treat half a million children. On the United Nation's child mortality rate map, Malawi was bright red 10 years ago, meaning it was among the highest rates in the world. Now it's a green country, which means it has the same mortality rate as many Europeean countries. Manary says it's the only country in sub-Sahara Africa that has a national program for malnutrition, which PPB set up. "We believe we were a great part of that [rate change]," Manary says. "On the other hand, we feel like there's so much more to do. Our hope is to turn Sierra Leone, Mali and Ghana into green countries."

Help from "angels"
PPB encountered a few challenges along the way, not the least of which was learning how to run a production operation when they had no prior experience. Help came from a number of sources, or "angels" as Manary calls them, saying, "These angels didn't have wings; they had information, which they shared freely." Among them:

• People at General Mills opened their doors and spent countless donated hours teaching the PPB team for the Sierra Leone operation about food safety and quality control, including Hazard Analysis Critical Control Points (HACCP). "We were doing it right and passing all the inspections," Manary explains, "but we didn't understand all the fine points. We now really grasp the significance of that." PPB even has a HACCP-qualified staff member now. Serving as PPB's quality assurance manager is Tabita Kamara, a Sierra Leonean who studied abroad and obtained his Ph.D. in food science and technology. 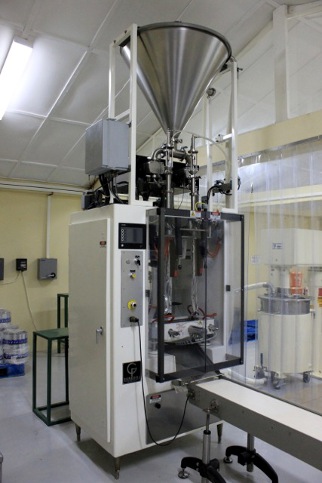 • The folks at General Packaging Equipment Co. provided more than just a vertical form-fill-seal machine. "I was the first person to look for sachet machines for Sierra Leone with the help of a volunteer, Zachary Linneman," Manary relates. "We heard positive things about the General Packaging machinery from several sources, including General Mills. General Packaging took us to different places to see the machine running. They helped us to understand what we needed; and they were very patient with teaching our staff all about the machinery," Manary says."We were absolutely out of our depth and they were great to us. I didn't even know that we had to order the materials from a different company."

Bob Kelly, owner and president of General Packaging, put together a short-list of film suppliers, which is how she found the packaging material.

• PPB worked with brothers John and Bob Hadraa at Photoprint Inc. in the U.S. to source an affordable laminated material that provided the necessary barrier and was easy to run on the packaging machine. Simple graphics are printed in a repeat pattern so the film doesn't need registration.

With a nitrogen flush, the reverse printed metallized polyester film delivers a 24-month shelf life. This enables PPB to run production rather consistently all year and build up finished product inventory for the hungry season when they see more malnourished children.

Manary explains that people grow their own food for the year and harvest in March, so from March through June, they have enough food to eat three times a day. From July through November, they eat twice a day, stretching out their food supplies. For the three months before harvest, December through February—the hungry season—people eat once a day, if they are lucky. Children can't eat enough in one meal to sustain themselves for 24 hours and severe malnutrition rates will quadruple during this time. However, PPB sees starving children all year long because food stability is tenuous in Africa and can be thrown off by frequent natural disasters and wars. 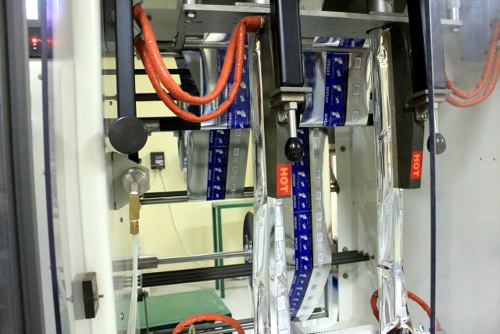 Simple to run and maintain machine
The Sierra Leone plant in Freetown is managed by an American couple, Mike Beasley and Chelsea Ringel-Beasley, and staffed with local workers; all were packaging novices. The packaging operation—designed to be as simple as possible—consists of a single vertical form/fill/seal machine from General Packaging Equipment and manual case packing.

A service technician from General Packaging Equipment spent a couple weeks in Sierra Leone to train the staff on how to operate and maintain the machine. The Model 70L2C vertical form/fill/sealer (vf/f/s) is a draw-bar design—the sealing jaws pull the film through the system as they move up and down—rather than a belt-driven system, which is a bit more complex to operate and maintain. "A draw-bar machine is also more forgiving of variations in film characteristics," Kelly says, which helps eliminate lengthy set-ups.

Maintenance is minimal, too. "The mechanism that drives the jaws up and down is very simple. We have a bell crank on a gear reducer that drives a walking beam that moves the sealing jaws up and down," Kelly says. "They grease the machine once a week. Otherwise they could go for 10 or 20 years without having to look at these components underneath. They are built rugged and they just go for a long, long time without requiring maintenance or attention." 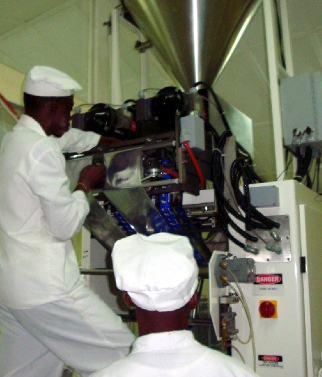 PPB developed a workable system for spare parts ordering and inventory. Manary explains, "The man who does maintenance on the machine is a phenomenal engineer, but he can't read, so we made pictures of machine parts he would need that he points to when he needs them."

The environment required certain modifications. General Packaging Equipment adapted its machine for the electrical requirements in Sierra Leone. The utility delivers 50 Hz and 440 volts, instead of the typical 60 Hz and 220 volts in the U.S. Power for the motors, which are rated for 380 volts, is supplied by a transformer that reduces the incoming voltage from 440 to 380. The motors also have special overload protection from the higher amps due to the lower frequency. Additionally, a control transformer drops the supply voltage down to 24 volts for the system's DC controls. Because electrical service is unstable in the country, the plant is also set up with generators to provide electricity when the utility's power goes out.

The packaging operation is fairly simple. A 50-gal hopper holds one 180-kg batch of RUTF, which is packaged in about 20 minutes. At the beginning of the day, while the first batch is being mixed, workers prepare the vf/f/s for initial startup and run a few empty sachets in order to check for proper sealing.

During product mixing periods, workers weigh out a set of ingredients for the next batch and assemble cases for the upcoming run. Each sachet holds 92 grams, +/-1g. Filling is done with two positive displacement pump fillers on the dual-feed system.

Production runs one shift six days a week but ramps up during the hungry season to run two shifts. For charities that buy the product at cost recovery, the Beasleys figure out how much it cost for the last month—considering raw materials, salaries, fuel and all other expenses—and that's the price for the next month. 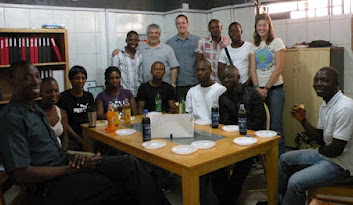 More mouths to feed
About 500 miles from the Sierra Leone plant, Project Peanut Butter is busy setting up its next facility in Bamako, the capital of Mali. They've selected another vf/f/s system from General Packaging Equipment "because of the excellent support and their assistance with teaching us how to use and maintain the machine," Manary says.

The system is ready to ship to Mali, but Manary says matter-of-factly, "There was a coup there, so we're holding off shipping to see how that's going to settle."