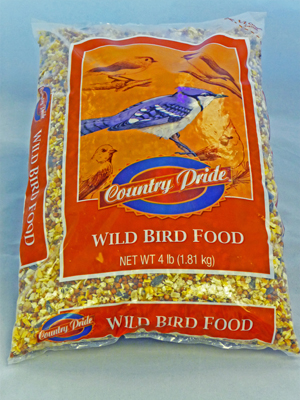 ertical form/fill/seal bag filling lines simultaneously. The machines produce 3- to 18-lb bags of bird seed that are manually placed into shippers that weigh up to 60 lb.

Scotts installed a four-axis Model MPL160 "Master Palletizing" robot from Motoman Inc. that is specially designed for palletizing operations. "We talked to several robot companies," says Scotts maintenance planner James Staples, "but we had worked with Motoman before, and we really liked them."

The filled shippers pass through Model Eagle T200 carton tapers from Berran Industrial Group Inc. The taper features top and side drive belts and a top motor that enables it to handle the heavy boxes that Scotts runs. A sensor from Keyence Corp. of America checks the tops and bottoms of the shippers to make sure they are secure.
The shippers then travel past a Model Duro 4.5 print-and-apply, corner-wrap, pressure-sensitive labeler from In-Line Labeling Equipment Inc. The label is printed by a Sato America Inc. Model M8485 thermal transfer printer. It is then peeled from the backing and placed onto a custom vacuum pad that holds it in place.

When the PLC signals the presence of a product, an arm swings in, picks the label from the pad and applies it to the corner of the shipper. Two brushes, one standard and one pneumatic, complete the labeling process. To ensure the proper application of the label, the labeler features a through-beam photo eye for label gap detection and a photoelectric eye for product detection.

"A worker in the QC office inputs the data that is printed on the labels, and it is then retained in memory," says Shane Harbolp, head packaging technician at  Packaging Systems, which distributes the In-Line labelers. "The next time Scotts runs this product, the worker only has to select the item being run, and the data will be sent to the labeler automatically."

Scotts worked with systems integrator CIM Systems Inc. to design and implement the project. "We had four contractors come in to review the project," says Staples. "Space was very limited and there is a low ceiling at one point, so we were concerned about getting the cases from the baggers up to the palletizer. 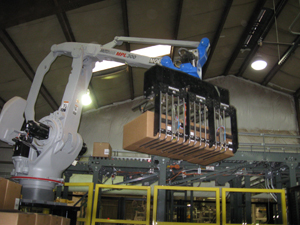 "We also wanted to be able to expand in the future, so that had to be included in our planning. After reviewing the proposals, we liked CIM's ideas the best, and their office was close to us, which was convenient."

CIMS supplied the conveyors from the vf/f/s machines, the robot, the empty and full pallet-handling systems, the pallet dispenser and all of the controls.

"It was a challenge to come up with a spot where we could palletize without interfering with truck traffic, and there was very little clearance between the conveyors and the ceiling beam," says CIM Systems president Dave Fox.
He added, "We presented a design where the shippers are elevated to a height that allows fork trucks and other traffic to pass under the infeed conveyors. Rather than adding cost and using valuable floor space to lower the shippers back to normal conveyor height, our concept keeps them at 10 ft above the floor. The Motoman MPL 160 robot has a large vertical reach allowing us to reach well below the base of the robot, while palletizing at a normal level," Fox says. "The end result solved all of the major obstacles."

The cell is controlled by an Allen-Bradley PLC from Rockwell Automation. The primary operator interface is a PanelView HMI, which is used to start and stop the equipment, select which product is running on each conveyor, and display equipment status and alarms.

The conveyors are controlled by variable frequency drives for speed and acceleration control. The 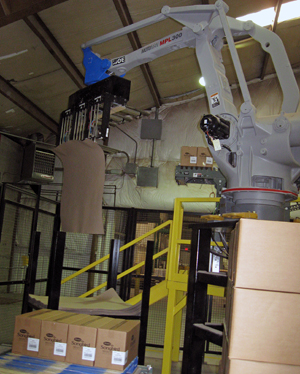 transfer cart that handles full and empty pallets is controlled by a variable frequency drive (VFD) and uses a laser feedback system to monitor its position on floor mounted rails. All of the major controls equipment communicates via Ethernet.
Shippers from the three bag-filling machines travel up individual inclined conveyors to three separate overhead infeed conveyors. A sensor at the top of each inclined conveyor counts the shippers as they are pushed at a right angle onto the conveyors that the robot picks from.

Once an entire row has been assembled, the robot uses a pneumatic, retractable fork-style gripper that was designed and supplied by CIM Systems to remove a row of cases (typically three to five).

The robot is equipped with a retractable fork-style gripper that was designed and supplied by CIM Systems to remove a row of cases.

"We originally wanted to use vacuum grippers," says Fox, "but some of the boxes were too heavy. The forks on this gripper slide between the rollers on the infeed conveyor, and a clamp descends to hold the top of a row of cases as they are transferred."

As the load on each pallet is assembled, the robot automatically picks up a slip sheet from a stack and places it between layers.

After loading the stretch wrapper, the transfer cart transfers the empty pallet onto the two-station transfer cart so it can be loaded onto the pallet-build conveyor the next time it exchanges pallets.

"The system has worked well, but we had to do some tweaking," says Staples. "The first slip sheets we used were too thin, and the robot couldn't handle them. A thicker slip sheet solved that problem." 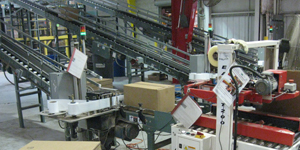 matic stretch wrapper, which is located in the warehouse. This was a complication, according to Staples, because the conveyor transporting the pallet into the wrapper passes through a fire wall, and a fire door had to be able to drop to the floor in case of a fire.

The plant designed the pallet conveyor with a fold-out section where it passed through the wall so the conveyor could be moved out of the way of the door.

Once the pallet is on the wrapper turntable, it begins to revolve and picks up the plastic film, which is located on a roll. The film passes through a guide and the wrapping starts at the bottom of the pallet. The guide moves upward as the pallet revolves to apply the plastic film to the entire pallet of product.

The guide then reverses and moves downward to apply another layer of plastic. When the guide reaches the bottom of the pallet, a cutter moves in and cuts the film loose, after which the pallet discharges.

The wrapped pallet passes by a Duro print-and-apply labeler identical to the units used to label the shippers. A sensor from Keyence Corp. of America reads the bar code on the labels applied to the shippers on the pallet, and the labeler prints the same label, after which an arm swings in and applies it to the corner of the pallet.

The tapers, labelers and the Wulftec stretch wra 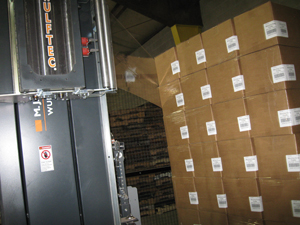 pper were supplied by Packaging Systems, which is a distributor for these components.

All of the controls on the equipment on this line were supplied by Rockwell Automation.

"The palletizer is doing exactly what we want it to do," says Staples. "We've been able to divert one person from each line, and we run three shifts a day, so we've been able to remove nine people per day from the palletizing operation. Best of all, we've eliminated the heavy lifting of the 60-lb boxes and minimized the chance of injuries.

"Motoman was good to work with and provided excellent service," Staples continues. "In one case, the wrist on the robot broke, and Motoman replaced it in two days. They actually took one off of an existing machine. We call the robot MOE for Motoman."