U.S. manufacturing leaders are extremely pessimistic about the U.S. economy, according to Grant Thornton LLP's most recent Business Optimism Index, a quarterly survey of U.S. manufacturing business leaders. Only 13 percent believe the U.S. economy will improve in the next six months, down significantly from 40 percent in May. At the same time, 40 percent believe the U.S. economy will get worse, up from 26 percent. In addition, only 21 percent of manufacturers say they will increase hiring and 35 percent say they plan layoffs.

"Manufacturing has been one of the few bright spots in the economy since the end of the recession, generating more than 300,000 new jobs since December 2009, according to the National Association of Manufacturers," says  Jim Maurer, partner and practice leader of Grant Thornton LLP's Consumer and Industrial Products Practice in Chicago. "Strong export growth in 2010 and the first half of 2011 helped increase revenues and create jobs. However, the slowing global economy coupled with a lack of confidence in domestic and global economic policy has caused senior manufacturing executives to turn cautious as these are matters over which they have very little direct control."

The manufacturers that Gruenes speaks to regularly say they are focused on matters that they can control, with their top three priorities being: 1) reducing costs by improving their manufacturing processes, using techniques such as Lean Manufacturing and Six Sigma; 2) upgrading their production equipment and IT systems to enhance their efficiency; and 3) re-enforcing quality and customer satisfaction. 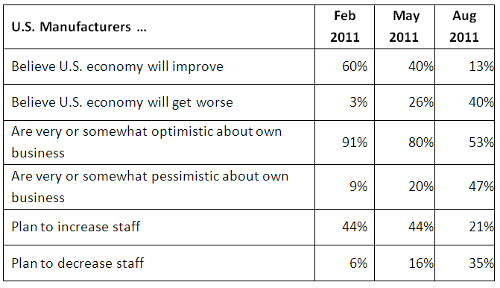 When asked what public policy initiative would make business leaders most optimistic about the country's future, a job creation program was most popular (46 percent) with manufacturers, followed closely by deficit reduction (43 percent).

• U.S. economy: Business leaders' perceptions of whether the U.S. economy will improve, remain the same or deteriorate in the next six months.

• Business growth: Business leaders' perceptions about the growth of their own business over the next six months.

• Hiring expectations: Whether business leaders expect the number of people their company employs to increase, remain the same or decrease in the next six months.

The survey was conducted Aug. 3-15, 2011, by an outside polling organization, with 374 senior executives from various industries across the country responding. Of those, 68 were from manufacturing. To see the complete survey findings, please visit www.GrantThornton.com/BOI.