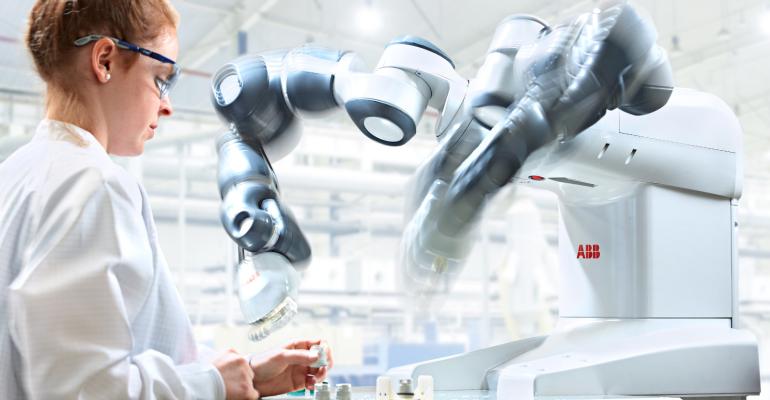 With precision, speed and safety among its top features, the new YuMi robot from ABB joins the rapidly growing list of collaborative robots that are revolutionizing many packaging tasks and operations.

YuMi gets its name from a mash-up of “you” and “me” and represents a step-change in manufacturing flexibility, especially when working side-by-side with humans.

YuMi was designed for small-parts assembly, used extensively in the electronics market (putting together cell phones, for example). However, Alex Miller, ABB media relations, tells Packaging Digest, “YuMi was not specifically designed for applications in the packaging industry, but its versatility and ability to collaborate with humans open up a great deal of possibilities, most of which are yet to emerge.”

Rick Tallian, ABB manager of picking, packing and palletizing products, expands on that: “There will be packaging applications for YuMi. We are hearing about applications that require a high degree of customization and flexibility. These applications may change on a daily or weekly basis to meet the customer demands. I believe that more opportunities with these characteristics will be identified as we further introduce this technology to the marketplace.”

In a press release announcing the new product, ABB CEO Ulrich Spiesshofer says, “The new era of robotic coworkers is here…. YuMi makes collaboration between humans and robots a reality. It is the result of years of research and development, and will change the way humans and robots interact. YuMi is an element of our Internet of Things, Services and People strategy creating an automated future together.”

The company is fully committed to supporting YuMi in North America. On May 20, 2015, ABB opened a new robotics plant at its facility in Auburn Hills, MI, and has already started producing various robots in its portfolio in the United States. According to the company, this makes it “the first global industrial robotics company to fully commit and invest in a North American robotics manufacturing footprint.”

YuMi, which looks to me like the upper torso of the robot Baymax from the popular animated movie “Big Hero 6,” has seven axes of movement, dual arms and flexible hands for a high level of dexterity and precision. How precise is its motion control? Repeatability is 0.02 millimeters.

Other features and benefits include:

• The compact robot is made with lightweight parts, making YuMi portable and redeployable at will. It also minimizes floor space needs.

• YuMi is able to replicate the same skill as a human assembly worker at speeds of 1,500mm per second and with a reach of 559mm. It can also process two tasks at the same time.

• With a FlexFeeder universal parts feeding system, YuMi can handle intricate 3D pick-and-place operations. Cameras embedded in the gripper can be used for simple inspection.

• Designed to be inherently safe, YuMi has no pinch points and can work without barriers, cages or zones. YuMi earned the “Best of the Best” design award from Red Dot for its human-friendly design. According to ABB, “It has a lightweight yet rigid magnesium skeleton covered with a floating plastic casing wrapped in soft padding to absorb impacts. If YuMi senses an unexpected impact, such as a collision with a coworker, it can pause its motion within milliseconds, and the motion can be restarted again as easily as pressing play on a remote control.”

• Teaching is accomplished with lead-through programming, which means YuMi learns as you move the arms through the series of movements, logging waypoints and gripper actions on a paired tablet running the YuMi app. The software then turns the movements into the underlying code, which means you can teach YuMi with fewer engineering resources.

One packaging task I think YuMi might excel at is assembling closures with multiple pieces. Might that open up innovative new designs that can’t be automatically assembled any other way? Now that you know what YuMi can do, tell us how you think you can best use it in your packaging operations. Leave your comment below. 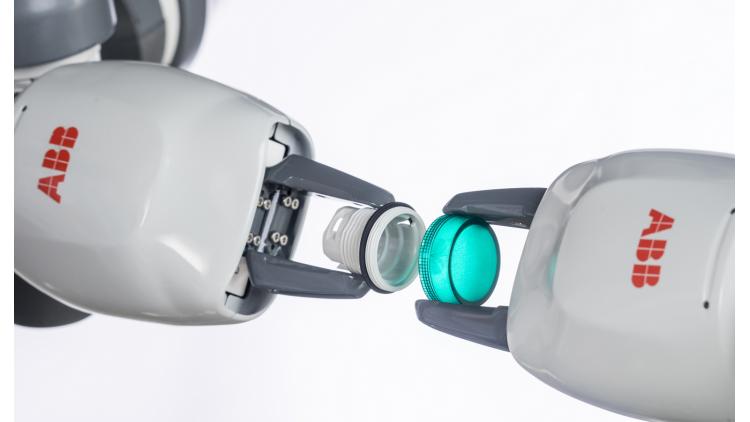