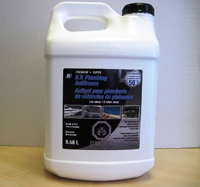 cases might have been a workable solution when volumes were minimal.

However, as described by plant manager Lawrence Winter, when market demand soared for the bulk containers, beginning in 2006, the line's packaging crew soon grew sore and tired. Back injuries seemed on the horizon.
"Sales levels of washer fluid and paint thinners in the large 9.46-L bottle have amazed us in terms of market demand," says Winter. "Sales climbed by 30 percent in 2009 and are up more than 50 percent since 2007. Overall, across the various products we offer in that large container, we're now processing more than 100,000 cases per year of those large and heavy bottles.

"About 18 months ago," Winter continues, "we realized we were pushing our people on the packaging line too hard, loading the bottles two at a time into cases and then palletizing the heavy cases 39 per pallet (three layers of 13 cases each). The physically demanding work not only tired our workers, but the neatness of the pallets also began to suffer. Any overhang of the cases can cause a customer to refuse delivery. We needed more precision, and we wanted to protect our workers from repetitive strain injuries. That's why, in mid-2008, we began to investigate automated solutions for case packing and palletizing." 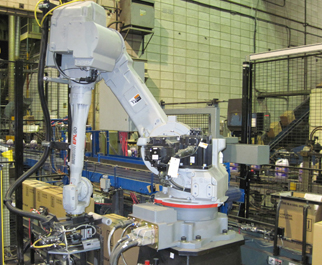 was conventional case packers using pick-and-place mechanisms and drop packers that use gravity to drop the bottles down into waiting cases.

"We also looked at a small, used palletizer," says Winter, "but overall, that much equipment would have consumed much more floor space than we had available for an automated packing and palletizing operation. We really needed a space-saving solution, and also were focused on minimizing maintenance tasks and expense."

The plant's savior came in the way of a palletizing robot from Motoman Robotics, which supplied the plant with an EPL80 (80-in. reach, 176-lb. payload capacity) five-axis model. The EPL80 also has a wide, 360-deg. work envelope.
The economical EPL80 combines high-speed, high-performance palletizing with a compact design, and proves ideal for end-of-line palletizing solutions that require minimal footprint. For Recochem, Motoman Robotics customized end-of-arm tooling to allow the robot to pack the cases as well as palletize them, all without skipping a beat.

"And, compared to conventional case-packing and palletizing lines," adds 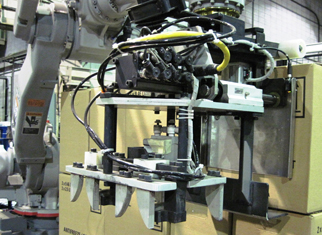 Winter, "the robotic line requires minimal maintenance and occupies relatively little floor space. In fact, the Motoman case-packing and palletizing cell takes up no more floor space than did the manual lines it replaced: 10.5 by 25 ft." Recochem installed the robotic line in June 2009, at a total project cost well within the firm's budget of C$182,000.

To feed the robotic packing and palletizing cell, filled plastic bottles leave the Recochem filling room on a conveyor that Motoman Robotics' engineers, working with Winter and his team, re-engineered to optimize process flow.
"Packing the cases and then finding a way to convey the filled cases back toward the robot for palletizing proved challenging to accomplish within our minimal amount of floor space allotted," says Matt Elson, the plant's operations assistant, who helped develop the complex conveying solution. "We went through probably 20 different design iterations until we settled on the final system design."

To allow filled cases to flow back to the robot, filled bottles convey into the cell elevated a foot or so above from where they exit the filling room. "This is accomplished by conveying the bottles onto a small elevating platform," says Winter, "that lifts the bottles up 12 in. and deposits them onto a channelizing conveyor. A diverter fills two lanes simultaneously that feed side-by-side down the channelizing conveyor and into the packaging cell."
Sensors tell the robot where to go

Once sensors signal the robot controller that bottles are in position for pickup, the robot grabs the bottles two at a time and drops them into a case. Filled cases then convey underneath the channelizing conveyor, through a top-sealing operation and then make a u-turn back into the robotic cell, on the opposite side of the case-packing station, so that the robot can palletize them.

The robot sits on a 3-ft.-tall riser to optimize its work envelope. A custom-designed, end-of-arm tool allows the robot to case-pack and palletize without needing to change tools; when the cell control senses a sealed case ready for palletizing, the robot temporarily stops case packing and moves to the filled case waiting on the opposite side of the cell.

"Robot actions are completely directed by sensors throughout the conveying line," says Winter. "Its controller knows when a filled case needs to be palletized. And we also sense the arrival of filled bottles so that if the filling line should shut down for some reason, the robot will focus on palletizing any remaining filled cases, and then will stand by awaiting the arrival of more filled bottles once the filling line resumes operation."

"A PLC from Omron Electronics, LLC controls all of 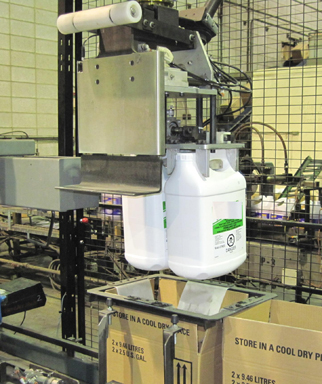 the conveying elements in the cell," says Elson, "and the robot controller, (a Motoman Robotics' NX100) directs the robot during case packing and palletizing."

Cell guarding includes a dual-channel zone-ring kit to monitor the robot's rotation as it swings from one side of the cell to the other and restrict its range of rotation to the required work envelope. Two sets of light curtains guard the pallet load and unload areas; an operator access gate with dual-channel safety interlock rounds out the safeguarding setup.

While one side of the robot's end-of-arm tool employs pneumatically actuated mechanical grippers to manipulate the plastic bottles, the opposing size of the tool-used for palletizing-features a small steel plate that slides underneath each packed case. A mechanical clamping arm applies downward pressure on the top of each case to ensure a firm grip.

Then it's up to the palletizing program stored in the robot control to locate each case accurately on the 40x48-in. pallets. Motoman Robotics' engineers programmed four different pallet configurations for Recochem.
"The robot has all but eliminated any overhang issues," shares Winter, "while we've also dramatically increased throughput. We're running the cell at 10 bottles/min., 20 percent faster than the cell was originally designed to run and some 35 percent faster than when we manually packed and palletized.

"And, we went from three operators required to case-pack and palletize on that line to one operator, who only has to monitor cell activity and keep the cell's case erector filled with flat cartons. The other two operators, which had been reassigned to the line from other areas of the plant when volume picked up, were able to return to their original and less physically demanding work areas."

"What you see today comprises just Phase I of this project," concludes Winter. "Phase II, which hopefully will occur later this year or early next year, will include automating pallet changes. We hope to acquire an indexing conveyor that will allow us to stack six to eight pallets into a magazine and have them automatically index into the cell. Full pallets would then exit on a conveyor for removal, so we don't have to stop the line in order to change pallets."

Note: This feature was first seen in Robotics Online (www.robotics.org).