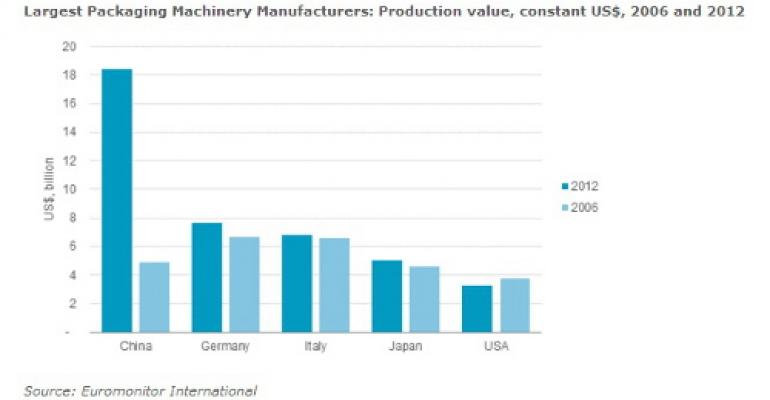 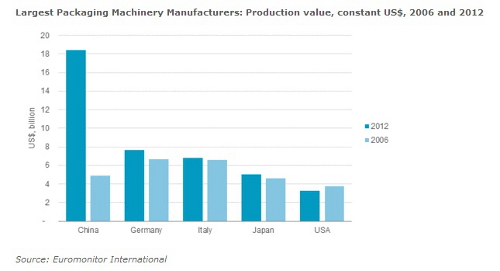 Global packaging machinery production value stood at around US$48 billion in 2012, following robust growth of 10 percent that year. Over 2006-2012, production growth averaged 7percent annually in spite of more than a 5 percent year-on-year contraction in 2009. Although four out of five dominating producers are developed countries, China emerged as the largest producer and consumer of packaging machinery globally and future growth potential lies mainly in Southeast Asia and Latin America.

China - the main producer and consumer

Strong growth in China was observed mainly due to the booming local market, driven by growing Chinese manufacturing output, increasing consumer disposable incomes and the diversification of consumer needs in relation to packaging functionality and quality. Chinese demand for packaging machinery stood at over US$1 trillion in 2012, a figure more than twice that of the second biggest market for packaging machinery, the U.S.

The second largest producer of packaging machinery globally is Germany. Industry revenue stood at more than US$7.5 billion in 2012 or 15 percent more than in 2006. However, Germany has still not fully recovered from the global economic recession, which hit the country hardest in 2009 when industry revenue dropped by more than 20percent. Germany was the most affected country of the top packaging machinery producers because German products are of a higher quality and are thus more expensive compared to those of the other main producers globally. The industry is expected to recover to the 2008 level of around US$7.9 billion in 2014, driven by exports to developing countries.

Despite the fact that four of the top five producers of packaging machinery are developed countries (Japan, the U.S., Germany and Italy), future opportunities lie in Southeast Asia and Latin America, mainly because of booming consumer expenditure and manufacturing output in key industries that need packaging, such as food, beverages, pharmaceuticals, home care and beauty and personal care.

More than half of packaging machinery is used in the food and beverage industries. To 2020, growth of consumer expenditure on food and non-alcoholic beverages is expected to be the strongest in the BRIC countries as well as in Indonesia, Mexico and Venezuela. As a result, eight of the top 10 countries by consumer expenditure on food and non-alcoholic beverages are expected to be developing countries.

Developments for other product markets and country
Another major packaging machinery customer group includes the manufacturers of pharmaceuticals, home care and beauty and personal care products. Among the major world economies, the strongest production value growth in this area is forecast in China, with around a 15 percent CAGR over 2013-2017. India, Russia, Saudi Arabia and Indonesia are also expected to record double-digit CAGRs over the next five years. Developed countries, on the other hand, will see considerably weaker growth, with a 1 percent CAGR forecast for Japan, 2 percent for Germany and 4 percent for the U.S. This will serve as an additional impetus for packaging machinery manufacturers to direct their investment at high growth regions.