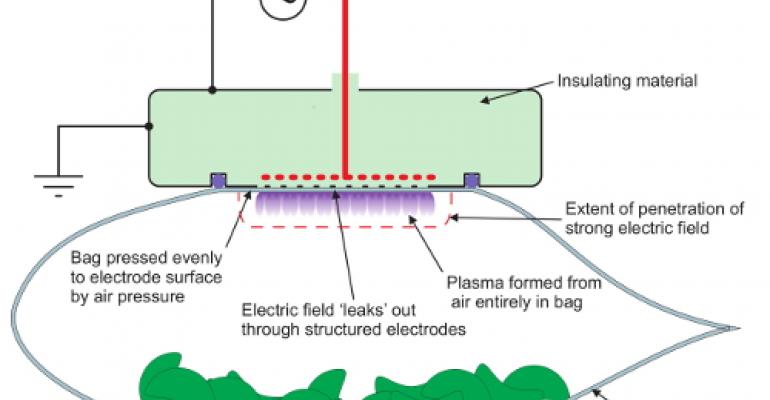 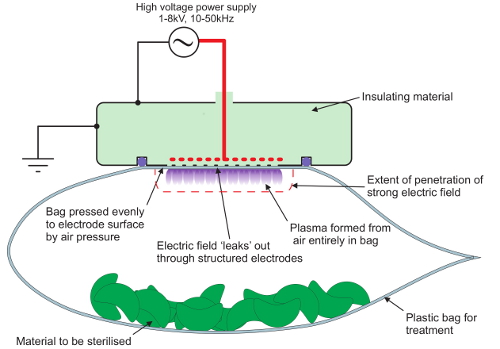 Plasma energy is usually the consideration of researchers in physics and astronomy, but scientists at the University of Glasgow in Scotland are directing it towards packaged products in the pursuit of improved food safety and extended shelf life.

Declan Diver and Hugh Potts of the University's School of Physics and Astronomy have prototyped and patented a system that rapidly, safely and temporarily turns some of the oxygen inside sealed packages into ozone, a highly effective germicide that works hundreds to thousands of times faster compared to chlorine.

The technology centers on plasma generated by a retractable device held briefly against the surface of plastic or glass packaging that splits the bonds between oxygen (O2) molecules inside the packaging. Those molecules reform as ozone (O3). The ozone naturally returns to its original state after several hours-more than enough time for any mold, fungi or bacteria in the packaging's contents to be destroyed without adversely affecting the product's taste.

The effectiveness of the process as a germ-killer also extends food's shelf-life by at least one day, which could go a significant way to cutting down on the seven million tons of food discarded in the U.K. alone and elsewhere each year.

The product is being commercialized by a University spinout company called Anacail, which means "shield, preserve or protect" in Gaelic. Anacail was founded in January 2011 and has recently raised £750,000 of seed funding from technology commercialization company IP Group and the Scottish Investment Bank, a division of Scottish Enterprise.

"We're very excited about the applications of our product," Anacail CEO Ian Muirhead tells Packaging Digest. "It's safe and easy to use, doesn't require any change in the current packaging of food products to be effective and it doesn't require any chemical additives-the sterilization effect comes directly from oxygen already in the package, which is treated by our plasma head.

"Although ozone can be harmful to humans, it has a very limited lifespan before it returns to oxygen," Muirhead continues. "This process doesn't leave behind any dangerous residues so it's perfectly safe to use in food decontamination. It's a very effective way to destroy or inhibit the growth of bacteria and viruses."

In a technical paper, researchers note that the main obstacle to widespread use of ozone in industrial manufacturing is the hazards associated with creating and handling it: "The fact that ozone spontaneously decomposes at room temperature means that it is nearly impossible to store and must be created at the point of use, a process requiring high voltages, typically via a corona discharge.

"It is also highly toxic, with a maximum user exposure of only 0.1 parts per million, making it difficult to safely insert into packages prior to sealing."

What Anacail's patented methodology does is bypass these risks by causing a plasma discharge to be initiated inside a package that is in intimate contact with the plasma source: "Packaged goods are brought to very close contact with the outer surface of the device, so that the bag effectively becomes another dielectric layer on its outer electrode. A pulse of power initiates a transient low-temperature plasma inside the sealed package, resulting in the generation of ozone inside the package. There is no significant thermal load on either the packaging itself or its contents, and the plasma does not directly interact with the bag contents. The ozone then permeates the entire package interior, reacting with any surfaces encountered including the interior package surface and all product surfaces."

According to Muirhead, the dosage is controlled by a number of electrical parameters and also the size of the electrode and how long it is switched on. "The larger the plasma head configuration and the longer it is energized, the greater the amount of ozone generated," he adds.

The efficacy of Anacail's prototype has been proven at leading U.K. test labs including Campden BRI in Gloucestershire. Tests have shown an increase in shelf-life for products-including bread and muffins-and a significant reduction (about 2 to 4 log) of many pathogens in skin-on and skin-off poultry, including campylobacter, pseudomonas and E.coli. It should be noted that ozone serves as a surface treatment, not a bulk treatment.
Ozone has long been known as a sterilant for food surfaces, but those applications have been on unpackaged foods.

"The breakthrough is that the Anacail technology can quickly, safely and repeatedly create ozone on-demand inside a sealed package without the addition of any chemicals or gases and without breaking the seal of the container," Muirhead emphasizes. "It's a post-packaging treatment."

With current concerns related to food safety and food waste, Muirhead says that the timing is advantageous for a technology like this: "There is a significant need to reduce waste throughout the food processing, distribution, retail and consumer supply chains," he says. "The technology also has the potential to make a major impact in food safety in emerging economies, some of which have issues of pathogen control in the supply chain."

In trials, there have been no measureable packaging migration on tested film, he reports. Thus far, "standard plastic films" used for food packaging including lidstock films have been successfully tested for use with the technology, Muirhead tells PD. He says the technology is not applicable for use with foil or metallized packaging films.
The costs for the patented technology are "broadly comparable" to that of a conventional modified atmosphere packaging (MAP) process.

To date, the science and technology have been demonstrated at the feasibility stage in a small number of food types. The next stage for the company is to look at a wider range of food types and scale the technology into full production environments and food processing lines, according to Muirhead. "We are looking at systems to treat at a rate of about a pack a second. This can be used alongside MA packaging-our technology only needs a small percentage of oxygen to be present in the container.

"We're currently seeking development partners to scale our product from small batches into full manufacture," he continues. "We are moving from manufacturing prototypes tested on small batches to production-level equipment being installed and evaluated. We are interested in discussing the potential of the technology with large food producers and with packaging equipment manufacturers.

"As Anacail grows and brings the next generation of the device to market later this year, we would look to expand our engagement into Europe, the Americas, Asia and the rest of the world-it is a global market opportunity."
And, he adds, "Although we're initially concentrating on offering Anacail products to the food industry, the process could be equally useful for the sterilization of medical and dental equipment and perhaps even for use in the home."