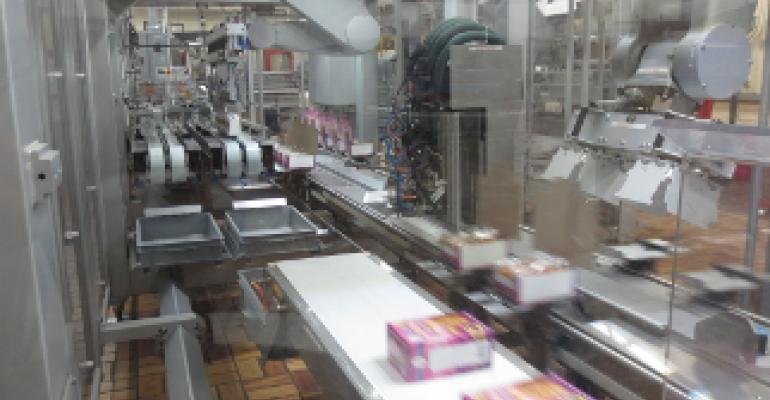 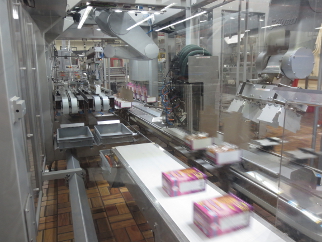 It's also where Fred Heikamp has been monitoring the production operations since 1958. A plant manager of 22 years and now a project manager, Heikamp is as careful about managing production changes involving new machinery procurement and start-ups as bakers are with changing ingredients to cookie recipes.

"Over the last three or four years we've spent a lot of time and effort automating our production lines," says Heikamp, who has worked the past three years in a semi-retired, part-time capacity. "This takes study and measurement so that we pick the right equipment. It's time absorbing for a small staff such as ours."

As part of his duties, Heikamp helps make the machinery selection and directs the purchase order.

"We like to get everybody onboard before we buy anything," he says. "There's nothing worse than to buy a piece of equipment that few like. If you prepare workers and explain why and can gain their buy-in, it makes all the difference."

All of these new systems were made by Bosch Packaging Technology and procured through distributor Charles Downer & Co. Ltd. Although Heikamp is quick to point out that Voortman has no commitments to any particular vendor, he acknowledges that plant personnel have taken a liking to Bosch machinery over the years.

"Bosch's machines are reliable, well-engineered and well built," he offers. "We've always had very good support and success in dealing with Bosch."

Voortman, Downer and Bosch have been working together directly since 1997 for a variety of projects, including installing a Delta robot from Bosch Sigpack Systems in 2005. That system has picked and placed up to 18 different cookie varieties that have been in production over that time.

Voortman and Heikamp have used robotics before: A 16-year-old Delta-style Demaurex system supplied through Charles Downer & Co. Ltd. by Bosch Packaging Systems, then known as Sigpack, performs primary packaging pick-and-placement of baked and cooled cookies on another line. Heikamp points to the success with that first experience to give plant personnel the confidence for additional robotic automation over the ensuing years.

"That was our first robotic system installed more than 16 years ago, and it's still working well," says Heikamp, noting that there have been no upgrades to the Demaurex system over that time, even for firmware. "Our aim is to keep it working 'til it's about 20 years old," he adds.

From primary to secondary

Until 2013, that packager-vendor relationship was focused entirely on primary packaging operations. This year, Voortman extended that relationship a major step downstream into secondary packaging with the additions of a Bosch Sigpack TTM cartoning system and three Bosch Paal Elematic case packers.

Our in-plant visit starts with the Sigpack TTM topload cartoner that's located only a few steps into the plant production operations from the company offices. Installed in January 2013, the Sigpack TTM is basically a three-robot system that accepts prewrapped packages of 2½-inch diameter cookies at the infeed and, at the exit, discharges sealed cartons of the cookies. In between, the robot-driven operations perform carton erecting, carton (top) loading, carton closing and sealing.

This had been done manually by eight operators at Voortman until sales picked up enough to compel the upgrade to automation. Heikamp noted during our May visit to the plant that the forecast was for even more growth for these products. With a current workweek of 50 hours for the cartoning system, Voortman has capacity available for more production.

According to Bosch, the Sigpack TTM system is designed for the secondary packaging of virtually any discrete packaged products included bars, tubes and bags. It also accommodates a range of package formats, including an open tray, a tuck-in tray and other formats. The carton materials can be made of corrugated or, as at Voortman, paperboard.

"The modular system comes as standard, but it's a flexible piece of equipment that can be tailored to the customer's needs with different infeeds, setups and discharges," adds Jeff Downer, head of Charles Downer & Co. Ltd. The Voortman system is rated at 75 cartons per minute, though Downer adds that another model can do up to 150 a minute.

The system features three robots from OEM Stäubli that are an identical base Model RX160 3-axis robot, but each is armed with custom end effectors for the particular function. Stäubli manufactures the units exclusively for Bosch in Europe. Bosch personnel handle the control/integration and after-market service, according to Stäubli.
The controls comprise a custom-built bundle of Allen-Bradley components from Rockwell Automation.

Baked and cooled cookies overwrapped just upstream of the Sigpack TTM cartoning system are transferred from the infeed conveyor into plastic flights where they are inverted 90 degrees into an upright position for robotic pickup. The infeed offers three-dimensional inspection using SICK photoelectric sensors synched to a pneumatic blow-off to prevent any off-spec package from entering the cartoning system. The wrapped cookie 2-packs are supplied to the robotic station on two lanes.

The first two robots are positioned in parallel across from each other. The first one picks the carton blanks from the supply magazine, erects them and then places them onto the loading section of the conveyor.

The second robot opposite the first does the pick and placement of the wrapped cookies from the flights and into the cartons placed by the first robot. This second robot picks up 20 2-packs at a time, loading five 2-packs into four cartons using lightly-pinching fingers to make the transfer.

The cycle repeats as the robot reaches to the second infeed lane to load each of four cartons with a total of 10 2-packs before the filled cartons are released to the closing station where a third robot is stationed. The carton is glued and the third robot closes the lid, seals it and places it onto a takeaway conveyor.

Heikamp feels that all-electronic robotics are the best machines for packaging because they are reliable, accurate and forgiving.

"We have found over the years that loading systems, whether manual or automatic, are more ‘finicky,' if you will, and don't have an efficiency that's as good as with robotics," he says.

Depending on carton size, the first robot may use one, two or four end effector modules to pick and place that same number of cartons. During our visit, the robots were handling two cartons.

The robotic end effectors are interchangeable and offer "one-shot" by flipping a lever to release the old one and replace with the new one. Along with the input of a new recipe via the touchscreen HMI, the entire time needed for a change in product and packaging formats and counts is said to be five to 10 minutes and completeley tool free.

Visit www.packagingdigest.com/voortmanTTM to watch a video of the cartoning system in action.

Three Bosch PAAL Elematic 3000L case packers were installed at Voortman in early 2013. One system was installed for sugar wafers, one for chocolate-enrobed sugar wafers in an overwrapped tray and the third for quad-sealed bags of cookies.

The servo-driven machines have an Allen-Bradley controls package including a PanelView 1000+ HMI. They can accept 35 different case styles from wraparound to RRP (Retail Ready Package) display case or tray, according to Downer, who notes that "any configuration that can be done with corrugated can be done on this machine."

On the sugar wafer line, the product is conveyed from the overwrapper into a collator at the infeed of the case packer where the wrapped packs are collated and built one layer at a time on a lowerator section until the proper count is reached.

The second layer is brought on top of the first layer by the help of a layer sheet. After the product is collated, the layer table lifts the product into the product infeed cassette. The product infeed cassette transfers the products onto the flat blank that was previously drawn out of a magazine and applied with adhesive from a Nordson hot-melt system.
During the lowering movement, the blank is formed tightly around the product collation and transferred into the case chain with flight bars. As the chain moves, the flaps are plowed shut. A final compression station ensures maximum glue adhesion and optimum case alignment.

Most machine parameters-such as format selection, positions, speeds, timing and glue positions-can be adjusted by the touchscreen. Case-size changeovers are made with the help of spindles with digital display scales. Some menus are password-protected for safety reasons. In one example of the system's many features, recent failures can be accessed to assess trending information.

According to Bosch, only one operator is required to occasionally resupply the corrugated magazine.
A wraparound case is discharged to the takeaway conveyor. The system is rated to accept 20 to 35 packages per minute. The case packers also have the option to accept a two-piece case in the future.
The Paal case packers were selected largely in part for their versatility, says Heikamp.

As with its nine other production lines, this one also includes Loma checkweighers and metal detectors, as well as Videojet inkjet printers that apply on-package product identification, best before date and print an Interleaved 2 of 5 bar code.

"As far as we know, there's nothing better on the market-these systems deliver as promised," says Heikamp.