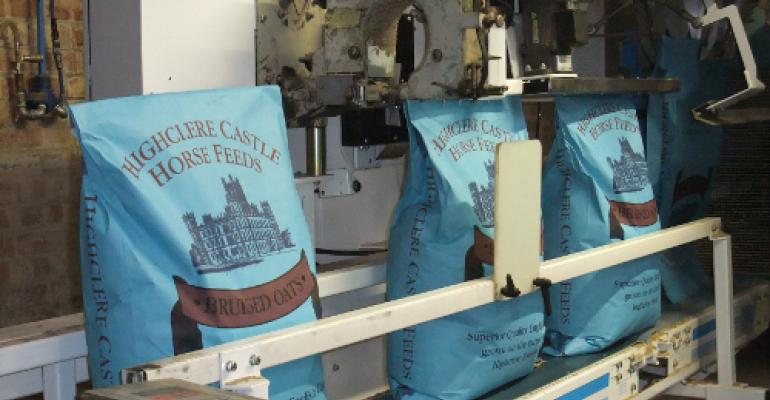 The Total Bag Control system prepares the bag top while on the bag clamp, then transfers it to the stitching unit using grip arms and a belt feeder that move in perfect timing with the conveyors sitting underneath. 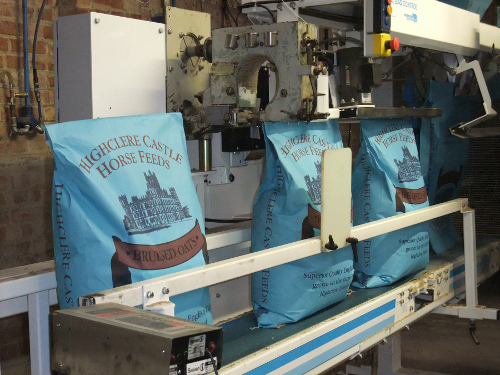 In the popular British drama "Downton Abbey," the fictional character Matthew Crawley undertakes to modernize the estate and make it more efficient and sustainable.

A modernizing improvement has occurred on the estate on real life: A bagging line at Highclere Castle Horse Feed Ltd., situated on the estate of the "Downton Abbey" drama, has been upgraded by U.K.-based Pacepacker Services to transform a partly manual system into an automated line that now bags 1,500 tons of horse oats each year. Spiroflow Systems is the exclusive distributor of Pacepacker solutions in the United States and Latin America.

To minimize the manufacturer's outlay, Pacepacker seamlessly integrated its Total Bag Control (TBC) bag closing system with the line's existing machines to provide a turnkey system, giving the manufacturer greater flexibility to handle different bag sizes. As a result the upgraded line has not only eliminated the need for manual labor, but more importantly enabled Highclere Castle to fulfill increased customer demand for oats.

The problem
The 3,000 tons of oats processed annually by Highclere Castle Horse Feeds are used as a staple ingredient within horse food. The harvested oats are clipped, polished, cleaned and graded with the small and broken ones kept for the Estate sheep flock. The oats can then be bruised or rolled to customer requirement. Half of the oats are delivered in bulk direct to racehorse trainers or collected by feed companies. One feed company puts the "Superior" graded oats into its racing mixtures and exports to seven different countries. The remaining 1,500 tons, and some wheat and barley, are bagged for various customers from farm shops to polo teams. Quoted as being the "Formula One fuel for racehorses," the oats are in demand from some of the top U.K. trainers, making them the second celebrated fare to hail from the 5,000-acre Highclere Estate.

Over time the original manual line—which weighed, bagged and sealed the oats—was gradually automated to reduce handling and increase throughput. Initially, a weigher, bag presenter and palletizing robot were installed. However, it was the final part of the chain—the bag closing system—that was "letting the side down," explains farm estate manager James Phillips.

"Our old stitching machine drastically hindered our output potential," Phillips says. "Once the bags were filled and dropped onto the moving conveyor, there was nothing to stabilize them during the stitching process, which meant that we could not achieve consistent well-presented packs. As a result, oat wastage was high. Pacepacker Services was recommended to us by word-of-mouth and they immediately suggested their Total Bag Control System as a solution. It would stabilize the bags throughout the sealing process and therefore provide a neat consistent seal."

Ian Merchant, now Pacepacker brand manager for Spiroflow Systems, comments: "It's the perception of many manufacturers that automating an existing line will be expensive. Pacepacker's TBC, as with all of our systems, has been designed with features that make it easy to integrate. It works in tandem with existing production equipment supplied by other leading manufacturers—as found by Highclere Castle. To achieve a fully automated system, we simply upgraded their existing line to keep project costs to a minimum."

The solution
Programmed with interlocking signals, the TBC is fed from the existing bag presenter and then, with motorized grip arms, holds the bag firmly in place while it is filled from the existing weigher above. Pacepacker programmed the TBC to work in complete unison with the weigher to ensure that the bag filling cycle is as efficient and fast as possible to maximize throughput.

Pacepacker replaced the original conveyor system with a TBC system that prepares the bag top while on the bag clamp, it then transfers the bag to the stitching unit using grip arms and a belt feeder that move in perfect timing with the conveyors sitting underneath. A 90-deg motorized Bag Kicker was also installed, complimenting the line by depositing the upright, sealed, conveyed bag to a flat configuration ready for palletizing.

Historically, the line required manual adjustment to deal with multiple bag sizes, which differed depending on each customer's requirements. Pacepacker's solution, the TBC, enables the system to be changed over to different sizes and types of bags quickly with only the minimal amount of adjustments required. Quite often the only change required is to raise or lower the conveyors.

Once the TBC was established within Highclere's production line, its problems with waste and pack presentation were completely eliminated. The full line is now running at six tons of oats per hour. One operator is now able to wrap the pallets, restock the bag presenter and keep an eye on the bagging line operation.

By gradually automating its production line, Highclere Castle Horse Feed Ltd. has been able to fulfill its sales potential and is now selling oats on a global scale. "Installation of Pacepacker's bag closing system has helped us to fully automate our line and we are delighted to report that it has revolutionized the way we pack," concludes Phillips.

Lord Carnarvon, owner of Highclere Castle, says, "I fully endorse the efficiency of the system. By automating the bagging and stitching line, we are now able to exploit the potential of our robotic palletizer. Highclere Castle Horse Feeds has continued to invest in production efficiency and quality of the process and the Pacepacker system has allowed us to considerably increase our sales throughput without the need for extra labor."