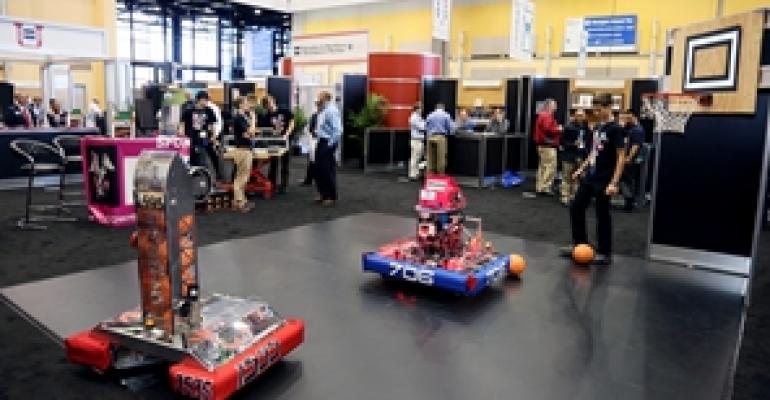 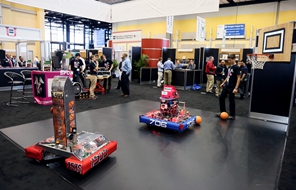 Robotics and automation are at the core of modern manufacturing, so when PACK EXPO owner and producer PMMI saw an opportunity to get high-school age engineers from FIRST Robotics teams involved in packaging and processing at PACK EXPO 2012, they took it.

"The FIRST Robotics Competition not only encourages the kind of enthusiasm for engineering that keeps the packaging and processing industries vibrant, it also fosters the relationships between local manufacturers and their communities that brings that enthusiasm—and these bright minds—to our industries," says Maria Ferrante, vp of Education & Workforce Development, PMMI.

The teams, from high schools around the country, participated in the "Future Innovators—Robotics Showcase" at PACK EXPO International 2012, sponsored by Massman Automation and Siemens. With help from sponsorships by exhibitors, eight teams that competed in the 2012 edition of the FIRST Robotics Competition came to the PACK EXPO show floor to demonstrate their robots. The 2012 competition asked students to create robots that would compete in sports-themed games, with a basketball-inspired challenge to create the machine that can shoot the most of baskets in a given timeframe.

"What these students achieved is really amazing," says Michael Senske, president/CEO of Pearson Packaging Systems, which sponsored a team of students from St. George's School in Spokane, WA, that exhibited in the showcase. "These young men and women aren't just interested in robotics. They're active in the field, and the knowledge they're displaying at such a young age makes them a vital part of the industry's future. I was very pleased to be part of this experience. I encourage all manufacturers to get involved in their local community. It is important to educate, engage and excite kids about our industry so that they consider a career in packaging and advanced manufacturing."

The teachers and students who came to the show were just as glad they participated, noting that even the sheer size of the show came with a lesson.

"The phrase ‘a kid in a candy store' really sums it all up," says Connor Clarke, engineering instructor and robotics coach at J.R. Tucker High School in Henrico, VA. (sponsor: Flexicell). "PACK EXPO took my experiences at prior events to a whole new level—each booth was larger and more informative than expected. Robotics companies from all over world were on the floor and demoing equipment in the booths, a true example to my students of how we live in a global market."

"The size of PACK EXPO was overwhelming; we only got to visit about 20 booths in two days," adds J.R. Tucker student Ruben Cubero. "It made me realize how much work actually goes into packaging something as simple as a bag of chips."