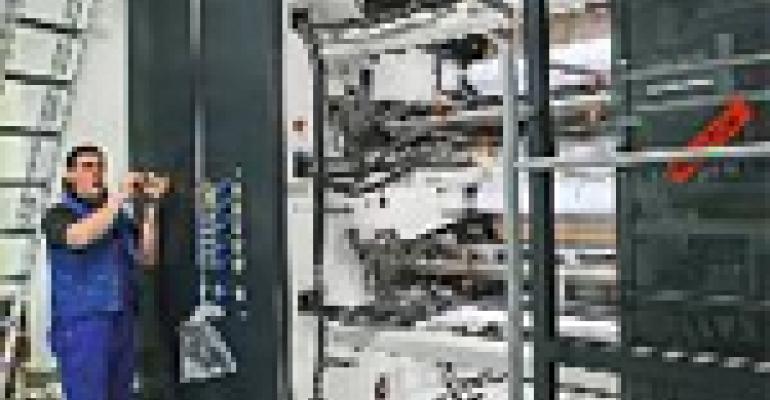 In the middle of a recession and shaky recovery, family-owned Kendall Packaging has been growing, according to a report in the Milwaukee Journal-Sentinel.

The 120-person business has launched its third expansion in six years with the purchase of a 10-color Windmoeller & Hoelscher press for $4 million.

"What it does is allow us to respond quicker to customer requests," said Eric Erickson, CEO of Kendall Packaging. "The press allows us to do what a lot of our competitors can't do because they haven't made that investment yet."

To kick-start the project, Kendall Packaging received $249,000 in economic development tax credits in June 2010 from the state Department of Commerce. In August, the agency approved $7.5 million in industrial revenue bonds for the project.

The company, which characterizes itself as a midsize converter, has doubled its sales over the past five years and now generates about $40 million in annual sales.

About 80% of the packaging the company produces is used for food.

With headquarters in Mequon, Kendall Packaging also has locations in Jefferson and Pittsburg, Kan.

The purchase of the W&H press is the first phase in a three-year expansion at the company's Jefferson plant that's designed to increase capacity.

"Really, all of our expansions are driven by capacity," said Stuart Zeisse, vice president of sales and marketing. "We simply can't let our machines get anywhere close to 100% capacity."

Phase two of the expansion will involve the purchase of more laminating equipment, which could range anywhere from $750,000 to $2 million. The company is researching what equipment to purchase and won't know what would fit best until phase two is closer to completion, Zeisse said.

For the final phase, the company is hoping to purchase land for a 50,000-square-foot renovation that would double the size of the Jefferson location. The land purchase will change the entire layout of the packaging plant with a goal of increasing efficiency.

Zeisse said he expects to see a return on the investment in about five years, but is still uncertain how much the whole project will ultimately cost.

The new press replaces a six-color press, and has the capacity to do four times more work as well as more complicated jobs, allowing the company to attract more business.

Kendall Packaging's expansion will likely add 22 employees to the Jefferson plant. The company has been able to grow in tough times and the future looks good, said Nate Friedl, director of manufacturing.

"I think what the Legislature has been doing to support small-business growth has been really good," he said. "I think additional regulation has far less influence on global corporations than it does on small business."

The company provides packaging for a variety of local and national companies and provides flexible packaging to Hostess baked goods and Red Vines candy.

Kendall Packaging has a number of competitors, Zeisse said, including Curwood, Bryce and Exopack, which recently opened a 10,000-square-foot distribution center in Guangzhou, China.

"We refer to packaging as a recession-proof occupation," said Mike Lorenzen, program director of packaging at the University of Wisconsin-Stout. "Our program at Stout has been at or near 100% placement all through this recession."

Lorenzen said UW-Stout is one of a handful of schools that provides a packaging major, including Michigan State University and California Polytechnic. The UW-Stout program has about 250 students, and Lorenzen said about half of the school's graduates find jobs in Wisconsin.

"Most of our grads have multiple offers. Most of them have jobs before they even graduate," he said.