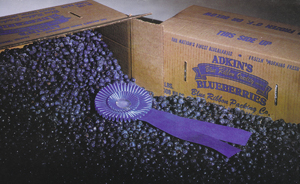 To Adkin Blue Ribbon Packing Co., its new x-ray inspection system could be called the “berries.” Located in South Haven, MI, deep in prime blueberry growing country, the grower/packer of cultivated blueberries for fresh and frozen distribution is harvesting rewards since adding the x-ray inspection equipment to its sorting and packing line. The equipment, a POWERx C600 x-ray system from from Thermo Fisher Scientific, helps Adkin prevent product contamination and ensure that its packaging is thoroughly inspected for defects.

One of the country's largest blueberry growers, Adkin farms 1,100 acres of blueberries and sells to bakery chains, foodservice and bagging customers and food processors.

Its frozen blueberry packing operation specializes in size grading according to customer needs. It has earned an excellent reputation in domestic and export channels and dependably supplies leading prepared food companies with a large volume of product, while maintaining high quality standards. Adkin's fresh-pick operation harvests blueberries in July, August and September, and consists of hand-picking the berries daily, by the truckload. Adkin typically bulk-packs the fresh berries in 30-lb film-lined shipping cases but can also pack them in 5- and 10-lb cases, 2-lb plastic clamshells, and pint and half-pint containers, depending on customer requirements. Because it's a berry packer, the company also buys berries from a select group of other domestic growers.

For Adkin, only berries in perfect condition, with the company's required level of quality, can leave its plant for distribution. It strives to ensure that “no stone goes unturned” when it comes to berry inspection and sortation. With the growing demands of stringent food-safety standards and higher levels of contaminant detection and inspection capabilities required, Adkin's existing in-case metal detector just couldn't keep up in terms of detection sensitivity. If there are any packing problems or contamination, customers can be lost. “In fact, a customer can recall an entire batch if they find just one contaminant, which could be very costly for us,” says general manager Tony Marr. “So the x-ray system can save us a lot of money.”

With the cost of such a rejection so high, Adkin looked to Thermo Fisher for help finding tiny contaminants in the 30-lb cases of berries. After a series of trials with Thermo Fisher's metal-detection equipment in the wet and/or frozen production conditions, Adkin discovered that metal detection wasn't sensitive enough to meet its requirements. The fact that the blueberries are wet makes it more difficult for a metal detector to find things like stainless steel.

“They then started investigating x-ray systems but were told by some customers that x-ray equipment probably wouldn't work either, remembers Thermo Fisher's Bob Ries, lead product manager for metal detection and x-ray inspection at Thermo Fisher Scientific. “But we all found out otherwise using the POWERx line.”

Thermo Fisher then ran tests with Adkin's cases of berries and the POWERx x-ray system in its lab and was confident that the large-beam, high capacity POWERx could do the job, Ries says. “We tested their shipping cases in our lab and found contaminants as small as one-point-five millimeters in size,” he recalls. “The POWERx had to find two millimeters of metal inside a shipping case, which a lot of equipment can't find due to the size of the aperture and proximity of the coils to the product. The two-millimeter size contaminant was our hard and fast goal. Adkin installed a POWERx system at their facility as a trial in late 2007, and it worked just fine, so they bought it.”

Adkin was impressed by the level of sensitivity in the POWERx system. “The sensitivity levels on the system are much greater,” affirms Marr. “The best we could detect with the previous metal detector was stainless-steel about four millimeters in size. Today, we can detect contaminants as small 1.7 millimeters in size and that's what we needed.”

Running up to 900 w of x-ray power, the POWERx has the ability to detect contaminants through shipping-case material and other upright packages such as pouches, cartons, cans and bottles. The system's x-ray beam works with packages measuring up to 15.75 in. wide and 10.04 in. high. A 15-in. color touchscreen LCD scanner interface displays or outlines potential problem areas and image-analysis software helps to optimize sensitivity and the probability of detection.

Designed with a color-coded button interface, image processing and analysis tools as well as system functons that make it intuitive and easy to understand, the POWERx can create and save detailed records for traceability and process improvement, including information-rich images of any rejected product.

But Marr says the key with x-ray technology in this case is that the 90-kV POWERx is able to detect more than metal. It can find other dense, foreign objects such as glass, stone and some plastics and improves detection where metallic packaging is used, which may impact the performance of other metal detectors. The system is also able to verify proper product assembly, presence/absence, counting, breakage and placement. In Adkin's case, it also finds berries on occasion that aren't ripe because they are denser than a ripe berry.

In Adkin's facility, the single-beam x-ray inspection unit is in place at the end of the berry-weighing/packing line, which runs about 12 to 15 cases/min, Marr says. Operators find the compact unit simple to use and operate and can react more rapidly to various types of problems that might crop up and eliminate unnecessary product rejects.

In production, after the berries arrive, they're inspected and put into a precooling system that lowers their temperature to 45 deg F, are air-cleaned, de-stemmed, de-stoned and washed, rinsed in a series of steps, “de-watered,” as Marr put it, and sorted on an optical laser sorter from Best USA (www.bestnv.com). Next, the berries are conveyed to a visual-inspection station before being sized. They are then transferred to the packing room where they convey on Metzgar roller conveyors to be netweighed and case-packed a Lakewood Process Machinery automatic case filler. The berries are deposited into film-lined cases that have been pre-assembled manually.

The filled cases are next tape-sealed by a Dekka Industries BEL 150 unit before they pass through the x-ray machine for scanning and the computer-controlled unit analyzes the images created to detect contaminants automatically.

When running, the POWERx displays an intuitive red light/green light status monitor along with simple summary statistics onscreen. Warning lights alert line operators when the x-rays are turned on. The system can sound an alarm buzzer to reject a package before operators remove the case and analyze the image recorded. They can also rerun the case to verify the contaminant. If the detector continues to sound off, the case is put aside to rework or dispose of. If several cases are rejected, an entire lot could be in question, Ries explains.

Next, the cases are palletized by hand and the pallet loads are transferred onto refrigerated trucks. For frozen distribution, the case loads are sent to freezer storage for blast freezing in a separate building. The loads are rack-stored.

“The x-ray system has allowed us to cut downtime as far as locating defects inside the filled cases,” Marr adds. “We can now find contaminants 100-percent faster because we can see a picture of the defect on the x-ray system's touchscreen. We saw a return on our equipment investment almost immediately, because we were able to trace really small contaminant particles embedded in the blueberries and could trace the crop back and put a stop to it,” Marr says. “We'd buy another system if demand required it.”