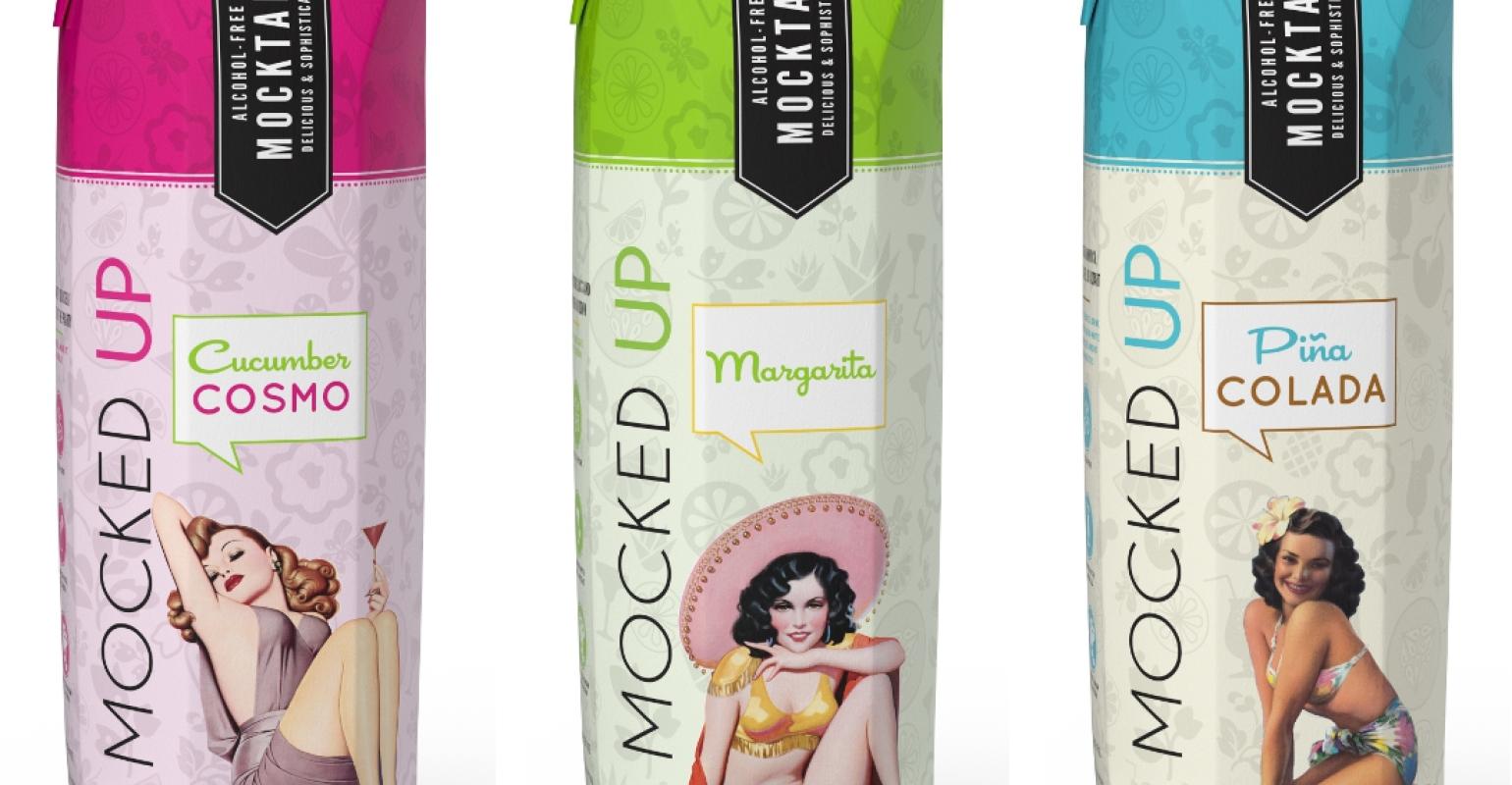 This line of alcohol-free beverages—mocktails, as they are called—make their impact with colorful and eye-catching graphics that are designed be sexy, flirty and fun for adult appeal.

LiDestri Food & Beverage wants to change the face of the beverage aisle from the ho-hum round bottle to what it sees as the stand-out package of the future: aseptic cartons.

To that end, the privately-held company has invested in two new packaging lines at its Pennsauken, NJ, plant to gear up for a surge in contract business for aseptic packaging.

LiDestri has several customers already, including Mocked Up, which launched a line of alcohol-free cocktails, called mocktails, in October 2014. I visited the facility the first day this product was being packaged on the new line in a private tour sponsored by LiDestri.

Why so bullish on cold-fill aseptic packaging and specifically the Tetra Prisma, an 8-sided shaped carton from package and machinery manufacturer Tetra Pak? Shelf impact, for one, because of the package’s flat front panel and ability to be printed with high-end graphics. But LiDestri sees multiple benefits for brand owner, consumer and manufacturer:

• The product doesn’t need to be refrigerated, a convenience for on-the-go consumers and a cost savings for shippers—nor does it require preservatives, a growing concern for health-conscious consumers;

• Products often taste better than their hot-fill counterparts because flavors aren’t cooked away;

• Outgoing, the square pack cubes out for efficient shipments, and saves space on retail shelves and in pantries;

• Food safety is assured because caps are applied after filling, so seal integrity is maintained; and

• A longer shelf life (compared to hot-fill packaging) enables manufacturers to expand distribution and can help minimize product waste because consumers have more time to use the product before it spoils.

Dave Stoklosa, vp corporate business development, LiDestri Food & Beverage, explains, “We have invested in this technology because we’re convinced that it’s coming. This wave of cold-fill aseptics in this package is a trend that’s going to hit. And we want to be in the catbird’s seat—that is, in a strong position to support the co-pack and private label markets as they emerge, not after they emerge.”

Today, about 60% of LiDestri’s business is contract manufacturing and packaging, 30% is private label and about 10% comprises the company’s own brands.

A leader in food processing—LiDestri is the No.1 tomato processor in the nation, making sauces, dips and salsas—the company entered the beverage market in 2011 with the acquisition of Zieglers, a fresh apple cider manufacturer.

Now, almost four years into the beverage business, LiDestri sees this as a high growth area and is investing mind, man and machine. “We staffed up for the growth,” says Art Balzereit, general manager for LiDestri beverages. “Bring it!”

“One of our rising stars is the spirits category,” Stoklosa says. “After just a few years into our new facility expansion in Rochester, we’ve become the largest co-packer of spirits in New York State.”

While the Mocked Up beverages are alcohol free, they represent a prime example of the transformation that LiDestri envisions. The line is starting with three familiar drinks: Margarita, Piña Colada and Cucumber Cosmo.

The genesis of the product came from personal experience. When Mocked Up owner Randy Shefshick and his pregnant wife were out to dinner one night with another couple, the mother-to-be felt a bit left out from the festivities because she wasn’t drinking alcohol. They realized that she wasn’t alone. Subsequent research on social media uncovered a unique usage occasion that was underserved: people, such as pregnant women or designated drivers, who want to “partake in the atmosphere but without adding a buzz,” explains Shefshick. Mocked Up can be used as a mixer for alcohol drinks, but its main role is as a ready-to-drink mocktail.

When it came to selecting the product’s packaging, they considered different formats, initially leaning toward glass. But Shefshick, a veteran in the beverage business, admits that he had wanted to work with Tetra Pak for a long time. “You can’t beat [the packaging] compared to other options,” Shefshick says.

Mocked Up is now sold nationwide in grocery, liquor and specialty stores (such as baby stores), $5.99 for a 1L carton, as well as online. “This was another ‘pro’ for Tetra Pak cartons when we compared it to other packaging options,” Shefshick says, referring to the fact that you don’t have to worry about breakage during e-commerce shipping.

This is one of the first 1L Tetra Prisma packages in North America to use Tetra Pak’s new HeliCap. Instead of having an inner pull tab, the tamper-evident screw cap punctures the package as it is twisted open. This eliminates a second opening step—pulling the tab—and is more convenient for consumers to access the product.

This bold move into aseptic packaging may have high rewards. But it’s not without risk.

“Unlike the rest of the world, U.S. retailers have been very slow to adopt aseptic carton packaging for high-acid products,” Stoklosa explains. “As such, both companies recognize the financial risk that comes with this endeavor. However, both companies also see high upside potential in private-label store brands in Tetra Prisma. Because Tetra Pak supports LiDestri in transforming private label to Tetra Prisma, they are helping us build the business into a profitable enterprise—so we don’t feel like we are being strangled by debt.”

The sizable capital expenditure topped $15 million and included two filling lines and a complete Tetra Pak front end for mixing/blending and sterilization. The front, processing end has enough capacity to accommodate two additional filling lines without modification, according to Stoklosa.

The two aseptic lines were installed simultaneously in April 2014 in Pennsauken, NJ. The location had been reimagined as a beverage packaging plant in 2011 when the company consolidated sauce manufacturing into the Rochester facility and acquired Zieglers. It also houses one hot-fill beverage packaging line.

Of the two new aseptic lines, Line 1 is an A3/Flex line for multi-serve Tetra Prisma packages, such as Mocked Up. It can make cartons from 0.5 to 2.0 liters, but will be dedicated in this plant to 1L and 750milliliter sizes. Line 2 is an A3/Flex Compact line for single-serve packages, creating portion packs from 80 to 375ml.

The two lines are similar in layout but have different bundling capabilities: Line 1 has an optional Tetra Pak 32 shrink wrapper, which can be bypassed if bundling is not required; and Line 2 has a CBP 32 cardboard packer for sleeve wraps and an FW68 film wrapper, both from Tetra Pak.

“We can do four-packs and six-packs. We can do multipacks for club stores,” Stoklosa says. “We put that technology into the lines ahead of time just predicting that this is where it is going. Let’s get the capability in there.”

Line 2 also applies the DreamCap to the single-serve sizes instead of the HeliCap. The DreamCap is designed with a comfortable mouth feel as these products are mostly consumed right from the package. With the larger multi-serve sizes, the cap is mostly meant for pouring, though Stoklosa says, “You can still drink out of it.”

One benefit of working with a single supplier for the entire line is that the systems can all be easily integrated. Nelson Alor, contract manufacturing manager at Tetra Pak Inc., explains that the lines are called “i” lines. “These are integrated lines,” Alor says. “Every customer wants to reduce their operating costs and what we’re trying to give to the customer in this case is to enhance the efficiency of the line by integrating the filler to the downstream equipment. There’s one control panel for everything.”

The LC 30 (line control) panel allows operators to monitor and control each machine on the line, adjusting speeds as necessary. It even integrates upstream to processing. “We don’t have to worry about ‘handshaking’ between processing and filling,” Stoklosa says. “We didn’t want technical inefficiencies associated with multiple equipment suppliers. So this is completely integrated all at once with one supplier: Tetra Pak.”

According to Keith Guenther, LiDestri’s director of operations, the lines’ easy installation and startup was accomplished by “planning and lots of communication,” as well as support from Tetra Pak.

As it stands now, the facility has room for another two cold aseptic packaging lines when capacity is tapped out on the first two. That has been the plan from the beginning. And, according to Stoklosa, that might happen sooner rather than later. “We have significant retailer interest, with some very large retailers coming on line this year. This alone could sell these lines out and we would have to go ahead and tell Nelson to get the other two lines in here as fast as we can.

“This plant physically can hold eight lines. And that’s ultimately, I think, our goal: to turn this into a Tetra Pak equipment facility,” Stoklosa continues.

How to Successfully Navigate Environmental Regulations
May 03, 2021