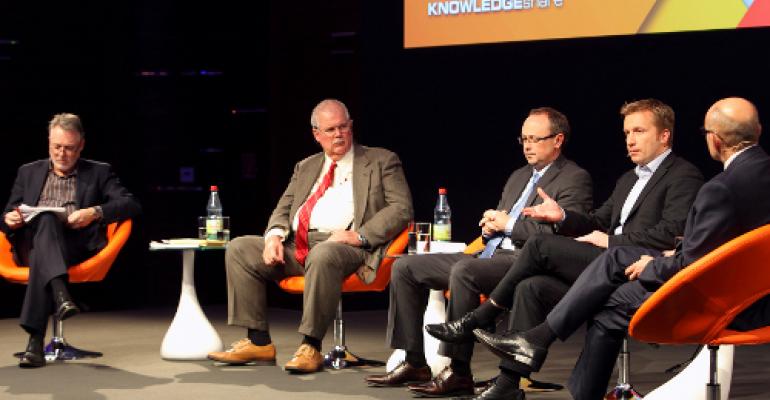 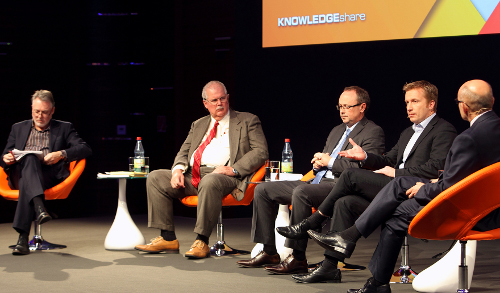 KNOWLEDGEshare 2013, hosted by Sidel, took place in Frankfurt, Germany, Nov. 25 and 26. More than 120 attendees from Europe, the Mediterranean and North Africa met to discuss the need for sustainability to assure the future of the bottled beverage industry. Participants included bottlers, suppliers and other links in the chain between producer and final consumer.

Mart Tiisman, president of Sidel, kicked off the conference with a welcoming speech. He outlined the need for creative thinking to meet the challenges ahead. Water and energy are two resources that may become scarcer in the future. More efficient, sustainable use (meaning: don't use resources that can't be replaced) will be one of the keys to making sure there is enough of both to go around for ourselves and our grandchildren. We have a lot of work to do. It has taken us a long time to get where we are and there will be no magic bullet to fix the problems.

The keynote speaker was James Bellini, the British "Futureologist." He looked into his crystal ball and described the world of 2030. Population pressures and improvements in living standards will have increased demand for food and energy by 50 percent and for water by 30 percent. One potential bright spot from global warming is that melting of the Arctic ice cap will reduce shipping times by seven to 10 days with consequent reductions in costs. Predictions are always hard, especially about the future, and Bellini would be the first one to admit it. Hard they may be but they must be made.

Other keynotes were by Bill Bruce of FoodBev Media and Mark Driscoll of Food Forum for the Future. Bruce took us on a tour of some of the innovative beverage packaging that is either new or forthcoming. Driscoll continued to emphasize the need for better sustainability to continue bettering the lives of all world citizens.

The more technical portion of the conference was divided into three streams or tracks. Each consisted of a panel of four to six experts plus a moderator and discussed The Liquid, The Package and The Production.

The Liquid
The Liquid stream focused on assuring product safety and complying with regulations. An important topic discussed in this stream was going beyond safe and assuring the consumer that they are getting a quality product. It makes little difference to sales that the product complies with all good safety products if the customer doesn't feel sure they are getting a good product.

The Package
The Package stream focused primarily on the PET bottle. One question from the audience pointed out that the weight of a 500ml PET bottle has gone from 19 grams in 2000, to 12 grams in 2008, to less than 10 grams today. If that trend continues, by 2023, there will be no bottle at all.

This led to discussion of the right weight. Too heavy is wasteful of resources and costly. This drives the trend to lighter weights. At some point the bottles become so thin that they begin to lose barrier properties, exposing the product within to potential degradation. Light weight bottles are also trickier to handle on the production line, which can lead to inefficiency.

The Production
The third stream, The Production, focused on combining the product and the package into a final product (I participated in this segment). This is an area that offers a lot of opportunity for improvement. As I pointed out, even seemingly small improvements can provide huge benefits. Improving operating efficiency by a mere two percentage points will provide an entire extra week of plant capacity at no cost. Reducing downtime by 10 minutes per day will provide similar results.

The conference provided ample networking activity and this is always one of my favorite parts. It was interesting to hear some of the techniques and challenges from experts in other countries and industries.

The conference was about innovation and one of the most interesting innovations was at the conference itself. Each attendee was provided a custom programmed iPad to use during the event. This provided conference information such as schedule and speaker background.

At various points the audience was polled on issues under discussion and how they saw them. The responses were selected on the iPad, immediately compiled and presented on the main projection screen. This instant feedback was used by the panels to help guide the discussions.

In most conferences, questions come at the end of the presentation when an audience member gets a mike and asks about something that came earlier. The iPads allowed audience members to ask any question at any time. Jane Farnham, the extremely capable conference moderator, then presented the questions to the panels at the appropriate time in their discussions. This allowed questions to be asked any time and answered when appropriate
The questions were displayed to audience and panelists, assuring that everyone understood them. It allowed anonymity to those who might be shy or worried about company confidentiality.

This was the first time I had run across iPads used this way. Now that I've seen it, I think it should be standard at any conference in the future.

Overall, this was the most dynamic and interesting conferences I have had the pleasure of taking part in and I look forward to future editions.