To view this feature as it appears in print, please see the digital edition on p.22; a PDF is also available. 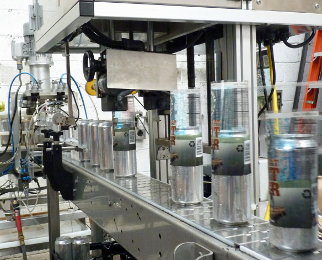 Innovation takes many forms and can spring from unlikely sources. Consider Great River Brewery (GRB), a small craft brewer in downtown Davenport, IA, and located several hundred yards from the Mississippi River's Lock and Dam No. 15, cited as the world's longest roller dam at 1,203 feet.

Started in Iowa City in 2004 as a brew pub, the business relocated to Davenport in 2008 and began brewing beer a year later. In May 2010, it expanded into packaging with the introduction of 16-oz cans of Roller Dam Red Ale and 483 Pale Ale, the latter in recognition of a nearby river mile marker. Since then, GRB has released brews including Organic Farmer Brown Ale and Redband Stout, a beer infused with cold-pressed espresso beans from Redband Coffee Co. One of the newest products is the 2012 debut of River Rat root beer, its first carbonated soft drink, which expands the company's reach to a new market segment.

Where GRB makes its mark in packaging is that, among the more than 2,100 breweries of all sizes in the U.S. (according to Wikipedia), GRB stands alone as a packaging pioneer: It lays claim as the first brewery to sleeve label cans.

"No one has ever sleeved a can of beer before," states Paul "Pablo" Krutzfeldt, manager of brewery operations, founder and a GRB co-owner with head brewer Scott Lehnert. "This is going to revolutionize the whole craft beer canning industry."

By cutting through the constraints of time, space and costs associated with printed cans, the preprinted film sleeves open wide the gates of operational flexibility for GRB's modest, but growing operation.

It's a bold move, and perhaps most surprising is that no other brewer, craft or otherwise, had made a commitment to sleeve labeling cans before. Krutzfeldt knows of two or three other breweries that are already sleeving cans because of GRB's initiative.

When GRB first considered canned beer, Krutzfeldt gravitated toward preprinted cans as so many craft brewers have done before. On top of the quality limitations he saw for offset-lithographic printing for cans, it was the minimum order quantities that stopped him cold.

"An order meant an entire 53-foot trailer of preprinted cans for one item," says Krutzfeldt.

"Preprinted cans quickly fill up our entire brewery, allowing us to inventory for only two kinds of beer," he explains. That's a severe drag on growth for a business that relies on a stable core of products supplemented by seasonal varieties.

Krutzfeldt felt there had to be another way. His eureka moment came while walking the aisles in a grocery store and seeing that sleeve labels were found decorating containers across numerous product categories with the exception of beer. He also uncovered a highly limited Labatt effort for a hockey promotion that used sleeved cans as a marketing gimmick some years ago for serving cold and warm beer, but that was about it.

"My reaction was that's exactly what we need to do," he recalls.

From the start of its packaging operations, GRB staked its entire business, which has been doubling almost yearly, on cans using printed sleeve labels from Multi-Color Corp. The label film is 50-micron polyvinyl chloride, reverse-printed flexographically in up to 9 colors.

For the first year or so, GRB used precut sleeves until it turned to automatic sleeve labeling and rollstock sleeve labels last summer. That's when its operations really got rolling-within a month's time a new filler was also installed (see sidebar below).

Krutzfeldt, a native of Louisiana who later relocated to Iowa to attend college, says that an order of about 5,000+ printed sleeves arrives in roll form in a box about the size used for Western-style boots.

"The warehouse space savings is huge versus even one pallet of printed cans," he emphasizes. "I can order as many different SKUs of sleeves as we need without having dozens of pallets sitting around or printed cans getting damaged."

An outgrowth of the space savings was a proliferation of products that gives GRB the same advantage that other sleeved packages have: Change the labels at will.

In summer 2012, GRB upgraded its packaging operations with an entry-level Tripack Model LSA160 applicator that cuts roll film into sleeves using a rotary knife. Mounted on a casters-equipped frame for easy line integration and with a compact footprint, the system is capable of applying up to 50 primary sleeves per minute using stepper motor technology. It has a touchscreen panel and is run by a programmable logic controller.

Krutzfeldt refers to the applicator as the "Katmatic 2000," so named because the sleeving had been done manually to this point by the "Katmatic 1000," Krutzfeldt's nickname for the operator, Katherine. While line speeds have remained unchanged at near 30 cans per minute, the Katmatic 1000 has been relocated to the end of the U-shaped production line near the discharge of the heat tunnel where she assembles the sleeved cans into multipacks and stacks them into corrugated trays on pallets.

One of the biggest challenges GRB faced as a pioneer in using shrink sleeves on cans was that cold-filling at around 32 deg F creates condensation on the cans and leads to a problem: Sleeve labels do not slide as easily down wet cans as dry. An air knife upstream of the sleeve applicator removes much of the rinse water and condensation from the cans, but enough remains to prevent the sleeves from being tamped completely down over the cans. That's where Louisiana native Krutzfeldt conducted what he calls "a little southern-style" engineering: A home-made secondary tamping device consisting of a reciprocating bar situated between the sleeve applicator and the heat tunnel. It augments the applicator's automatic sleeve application and fully seats the sleeves over the can body prior to entering the shrink tunnel.

The sleeved cans continue on through a dry-heat tunnel selected for economics and start-up simplicity. Due to a boiler upgrade, Krutzfeldt is considering moving in the future to a steam tunnel that has now become a viable option and that would provide a more aesthetically pleasing shrink quality.

The shrink-sleeved cans exit the tunnel where they are manually packed using a QuadPak four-can can carrier ring from PakTech. The carrier color of red, black or green is coordinated with the product and label. Made of high-density polyethylene and 100 percent recyclable, the can carrier permits stacking into towers, a key reason Krutzfeldt selected it.

Another reason is more personal. "I grew up in south Louisiana where we're duck hunters from way back," he relates. "Down there you would occasionally see the old six-pack rings caught around a duck's head. When I saw the PakTech product at a brewing tradeshow, I liked it right away."

About 70 percent of its production is for cans, the remainder is kegged beer.

In 2012, the operation canned a total of 10 products consisting of house and seasonal beers plus one carbonated soft drink. With the flexibility afforded by sleeve labeling, Krutzfeldt expects to add seven new beers in 2013.

Like the river, Great River Brewery will continue rolling onward. 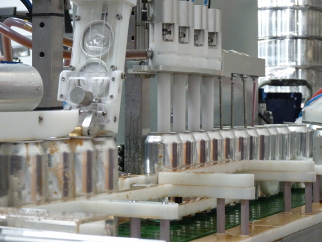 The line is operated during afternoons four days weekly, which is enough time to drain one of the 20-barrel tanks located in an adjacent beer processing area.

During Packaging Digest's early December visit, the line was canning root beer, a recent addition to its product mix. Operating in the range of 20 to 30 cans per minute, production starts with the bulk infeed system fed cans from stretch-wrapped pallets layer by layer by an operator.

Supplied by Rexam, the cans are inverted and cleaned via air and water through a twist section from the Wild Goose Canning division of Wild Goose Engineering. Cans are conveyed upright to a Wild Goose-supplied Model MC-250 filler equipped with a PLC and pneumatics from Festo and a touchscreen operator panel. The indexing filling system advances four cans at a time, first beneath plunging carbon dioxide purge tubes to reduce the oxygen levels in the cans and then on to the four-up plunging filling heads. A nice engineering touch is that the removal of spacers permits an easy and, according to co-owner Paul Krutzfeldt, "pretty neat" changeover to 12-oz cans, though GRB has not run that size yet.

The cans are released to beneath an "end dropper" where the cans snag a can end as they are conveyed past. Next is a patented, cam-driven two-stage seamer from Wild Goose positioned ahead of a sharp 90-deg conveyor turn that takes the cans through a Wild Goose water-spray and air knife process to rinse and dry the cans before sleeving.
"It's all in one nice and tidy 8-ft conveyor section," adds Krutzfeldt of the Wild Goose equipment.