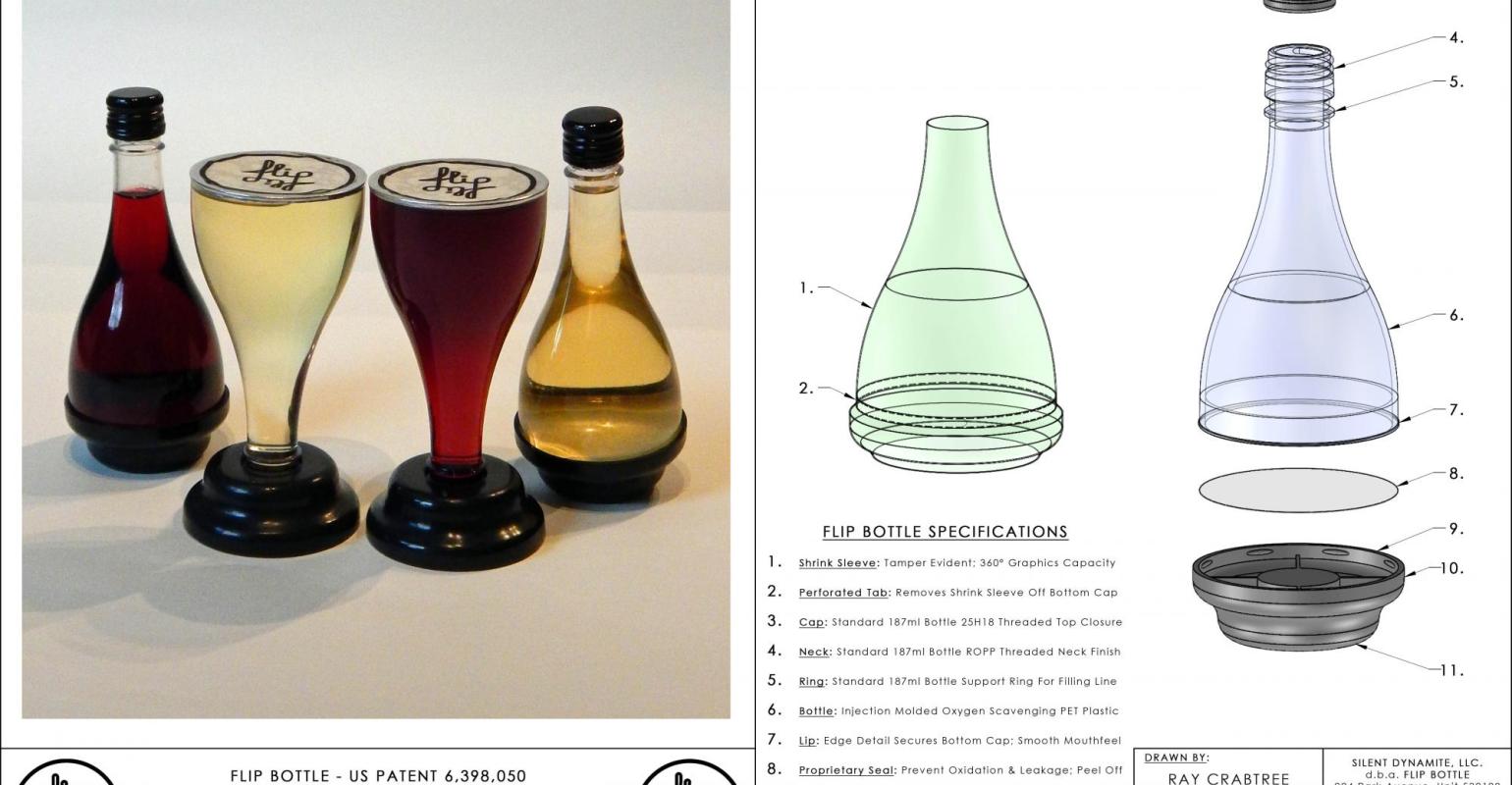 The Flip Bottle as an 187mL PET container in real life and as a design in the drawing.

This patented, all-in-one bottle and glass moves closer to commercialization in a prototype in the form of an oxygen-scavenging 187mL PET container. Learn more about this fascinating, one-of-a-kind package and find out what’s next.

Periodically over the past year and a half we have updated the saga of Vincent Allora, inventor and owner of the Flip Bottle, a unique, patented and one-of-a-kind container for wine and other beverages. Here are the latest developments regarding the invention starting with a newly created oxygen-scavenging prototype.

As a reminder, the Flip Bottle is a first-of-its-kind package that functions as an all-in-one bottle and glass. It is protected by United States Utility Patent Number 6,398,050 and can be manufactured to suit the specifications of any beverage currently available to the public, and would make for a perfect new commercial product launch. It can be personalized for special occasions such as weddings, birthdays, anniversaries, religious ceremonies, and is a perfect package to take on picnics or serve at sporting events, concerts and other public venues.

You’ve got traction with the invention and you now have prototypes—please bring our audience up to speed on those fronts.

Allora: After the Flip Bottle article was published by Packaging Digest in its “Promising Patents” section of the May 2013 issue (you can read the full-version article here) we were astounded by the positive feedback and inquiries about our new package design, and the most frequently asked question was  “do you have a production quality prototype?” We immediately began brainstorming about all of the potential beverages that could use the Flip Bottle and quickly realized that almost EVERY beverage could benefit from our package design. So we needed to make a decision and came to the conclusion that one product in particular is traditionally poured from its original package into a glass to enjoy, and that is wine. Then we employed the philosophy of esteemed modern architect Louis Sullivan’s most notable phrase, “Form Follows Function”, to identify the criteria for the Flip Bottle prototype.

The prototypes were designed and engineered based on two critical elements; first to execute the functionality of our utility patent by creating a liquid container that functions as both a bottle and a drinking glass all-in-one package, and secondly to standardize the threaded narrow end of the container to allow it to seamlessly integrate into conventional or traditional 187mL single serving size wine bottle filling equipment. The latter galvanized our decision to create these prototypes specifically for wine and to maintain the industry standard 187mL single serving size.

We experimented with several different materials including glass, aluminum, and various types of plastic for our prototypes, but ultimately we used a proprietary, oxygen scavenging PET plastic for the bottle. It maximizes the shelf life of wine and is injection molded to create its unique shape and specific details. This design incorporates a standard ROPP threaded neck configuration on the narrow end to be compatible with standard 25H18 cap closures. The large end has a smooth lip finish for a comfortable and familiar mouth feel, with edge details allowing the proprietary bottom cap/wine glass base to lock onto the bottle. Finally, in order to contain and further preserve the wine in the bottle, we incorporated a proprietary, oxidation and leakage resistant removable induction seal covering the large open end of the bottle.

What does this latest development mean?

Allora: In addition to all of the individuals and businesses who inquired about the availability of production quality prototypes, we’ve since made numerous contacts with many other related businesses. From industry leading wineries, alcoholic and non-alcoholic beverage companies, bottle manufacturers and material providers, caps, seals, and closure suppliers, we are now able to provide all of them with our new prototypes. Additionally, now with our Flip Bottle for the wine industry professionally engineered and ready for production, we can begin to focus our efforts on designing and developing new versions for other beverages and applications, as well as explore the opportunities to utilize alternative materials and explore additional variations from our numerous promotional visual graphic presentations. The Flip Bottle can be adapted to satisfy the needs and imaginations of almost any interested parties.

Who can we credit for the prototype?

Allora: Prior to the 2011 Pack Expo in Las Vegas, NV, we contacted Paul Bordner, the president of Laser Reproductions, a family owned and operated business in Ohio. They are a leading provider of rapid prototyping, manufacturing and product development services, and we contracted them to make our first-generation prototype. We worked closely and almost daily with their resident industrial engineer and 3D modelling specialist Ray Crabtree to create a quick SLA model of a 12oz version of the Flip Bottle re-using an off-the-shelf standard plastic soda bottle cap on the neck and a plastic peanut butter jar cap on the bottom. It was a suitable representation of the Flip Bottle concept to demonstrate to people at the show, which led to meeting with Ronald deVlam and soon after contracting his firm, Webb deVlam, to produce most of our visual presentations, representations and variations of the Flip Bottle for promotional purposes.

After PD's May 2013 “Promising Patents” publication was released we contracted Laser Reproductions again to create this production quality prototype. There have been over a dozen new prototype iterations over the past year and a half of this redesign process in order to achieve all of our benchmarks for the Flip Bottle. Throughout the entirety we have consulted with most of the industry leading bottle manufacturers, material suppliers, conduction/induction cap sealers, surface treating systems, and tamper-evident caps, closures and lining material manufacturers.

Allora: In 2015 we plan on following-up with everyone who has ever expressed interest in receiving and testing a prototype including most of the industry leading wineries, alcoholic and non-alcoholic beverage, bottled water, energy drink, and milk and dairy companies. We will also be getting back in contact with all of the major bottle manufacturers to discuss possible collaborations or working partnership arrangements, licensing agreements, or sale of the Flip Bottle patent and intellectual property.

There is also a very serious and tempting new relationship we’ve established on this past Halloween to explore the opportunity to build and operate a manufacturing facility for the Flip Bottle in the United States, specifically in Colorado, to keep production domestic and create new jobs and revenue in the State and in the U.S.

Promoting the Flip Bottle through social networking websites, i.e., Twitter, LinkedIn, YouTube, Instagram, Vine, etc. is also a top priority for our business. In order to maximize our potential for success we are already in the process of creating additional promotional material with the new production quality prototypes, including print advertisements, video productions, and possibly radio and television advertising and commercials.