The Flip Bottle: A tale of a patented packaging concept 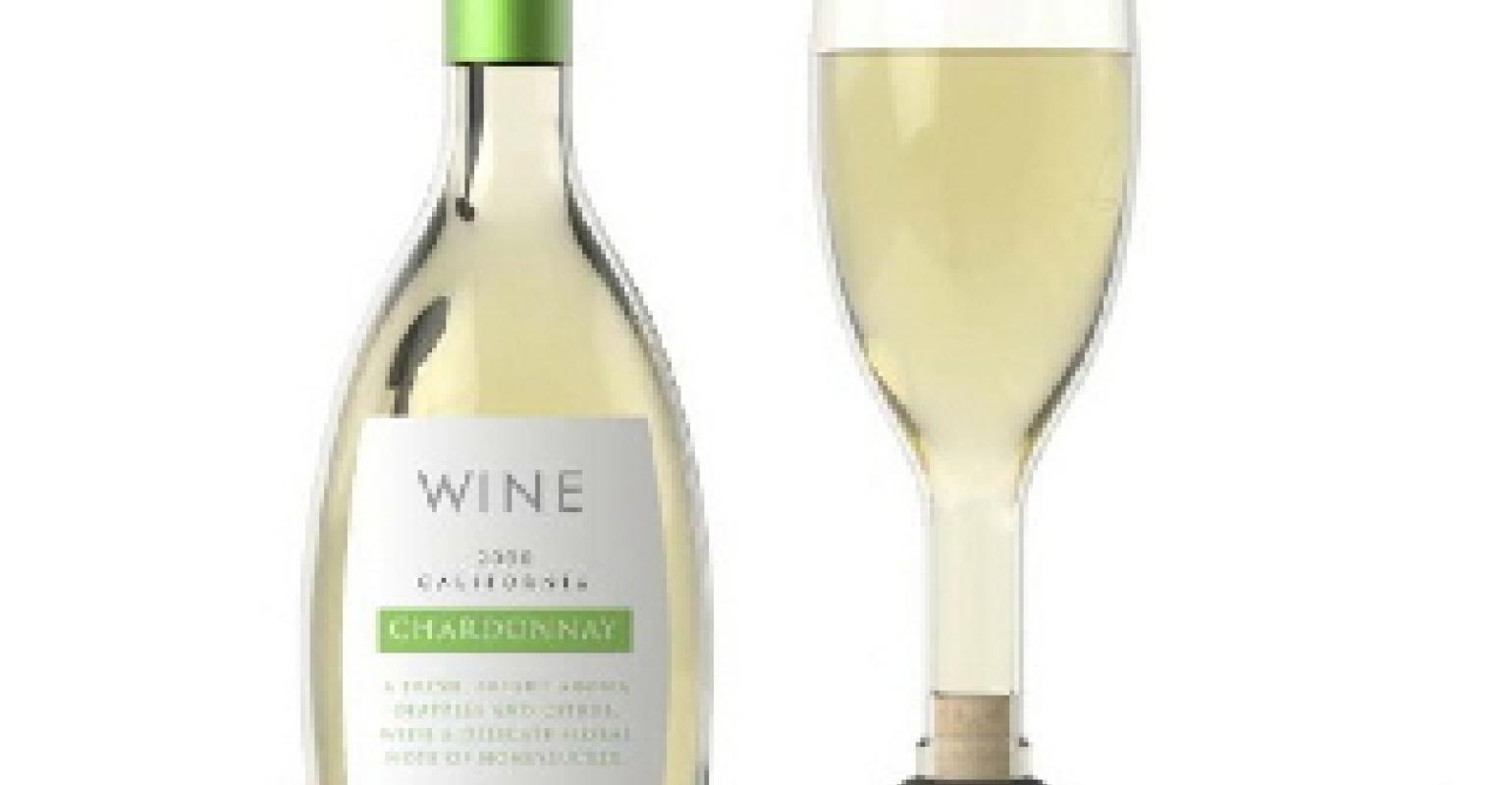 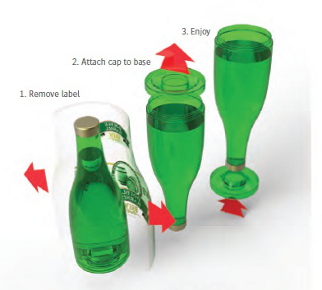 Imagine a "side" job that could easily become full time for something you're passionate about-and have been kicking around for a decade? And imagine that it involves a very cool packaging concept. That's the case with Scott Clark, a "regular guy" with a typical full-time job in sales, marketing, and customer service in a completely unrelated field, whose business partner Vincent Allora invented and patented the Flip Bottle about 10 years ago.
"We really didn't put much time or effort into trying to market this product most of the past years, but within the last two years we decided that now is the time to make the effort," Clark says. "We still have a little over 9 years left on the patent so it's just a matter of us getting around to working on it."

Packaging Digest: What has been your biggest challenge to date and especially recently?
Clark: To be honest, we believe the biggest challenge is that we don't have any packaging experience. We simply created a new bottle concept using standard components in an unorthodox design resulting in our versatile new technology. Over the past 18 months we've been in contact with most major bottle manufacturers, as well as end users and distributors in the wine & spirits industry, encouraging them to try our patented new bottle. We just don't have the experience in the field to make that happen as quickly as we hoped.

PD: What kind of interest have you seen and what kind of reaction are you getting?
Clark: We get a great initial reaction, but it seems that this is such a unique idea that people don't know what to make of it or how to incorporate it into their existing packaging line. We feel that if we use a standardized top cap on the narrow end of the bottle it would be adaptable to most filling lines. Our Flip Bottle could be filled using the existing machinery, equipment and process as their traditional wine bottles do today. Then we would address the larger opening using a closure or closures on this end ensuring a proper seal and providing the support base of the bottle in its inverted position. There are many existing products on the market today integrating a variety of solutions for positively sealing large openings for us to refer to that may be incorporated into our Flip Bottle design.

PD: This would be a standard 28-mm closure or similar on the narrow end?

Clark: Since we have a utility patent that covers the functionality of the bottle we could tailor that to just about any application. There are many different variations of what size closures could be used within the parameters of our patent to produce a bottle that also is a glass. It's up to the end user to decide exactly how they want the bottle to be manufactured.

PD: Is the hurdle you're running into a marketing one or a technical one?
Clark: We've been assured by almost all of the bottle manufacturers we remain in regular ongoing contact and discussions with that a consumer ready production version, including multiple variations of the Flip Bottle from our graphic presentations, can be made using their existing manufacturing equipment and machinery. We are still working with them on engineering or selecting the specific technology incorporated in our concept so we can offer a turn-key solution to the end users who would ultimately put their products in our bottle.

PD: Do you have prototypes?
Clark: Yes. We employed the services of three different companies specializing in industrial engineering and computer generated three-dimensional modeling, all of which utilized stereo lithography (SLA) to make prototypes illustrating various versions of the Flip Bottle. We also have two different style glass prototypes of the Flip Bottle made by a professional glass artisan from the Atlanta area.
However, we believe plastic is really the best way to go with this. We spoke with some glass manufacturing companies and the traditional blow molding process as well as the alternative injection molding process presents a challenge having the second open end. However, as stated, glass remains a viable option.

PD: How did your involvement with designer Ronald de Vlam come about?
Clark: We met Ronald de Vlam CEO & global managing partner, Webb deVlam Chicago, LLP (www.webbdevlam.com) at the Pack Expo Las Vegas in September 2011 and he immediately bought into our idea. We attended the trade show to determine if any packaging products, concepts or companies were relevant to or potential partners or prospective customers for the Flip Bottle, and also sought to gain as much knowledge and information about the packaging industry as possible. At the direction of Ronald de Vlam, Webb deVlam has created all of the new graphic images, renderings, and presentations of our Flip Bottle concept. 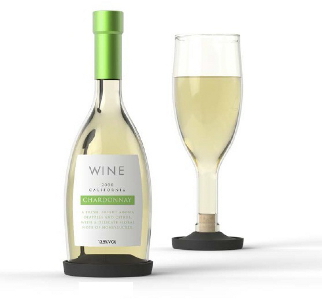 PD: The examples deVlam developed show variations of the theme for Flip Bottles of wine (shown)-why was wine selected?
Clark: Typically people drink wine out of a glass as opposed to the bottle, so we figured we would offer consumers an innovative new solution in the form of a single-serving wine glass that doesn't require any tools or technical expertise to transform the Flip Bottle into a glass. We believe single-serving wine, along with the vast array of spirits used in mixed alcohol beverages, and even beer is our target market. Specifically, single-serving wine has well-documented, consistent annual growth and has become an international emerging trend. Because our Flip Bottle incorporates two closures we expect our packages to be produced at a justifiable premium; so it's safe to suggest high-end packages deserve high-end products.

PD: What size and format are you considering?
Clark: Our philosophy is to basically take a standard 750ml wine bottle, with either a typical natural or synthetic cork or the more recently introduced and generally widely accepted threaded screw cap, and cut the body of the bottle down to contain any standard volume of wine. The smallest at 187.5ml known as the "Piccolo" version, the largest at 375ml/half of a 750ml "standard" bottle of wine known as the "Demi" version, somewhere in the middle at 250ml known as the "Chopine" version, or whatever quantity is desired by our customers.

PD: Can you tell us more about the current level of interest?
Clark: We have a number of Mutual Confidentiality and/or Non-disclosure Agreements in place with many of the major bottle manufacturers in the USA, most of the household name brand beer, wine, and spirits conglomerates/holding companies in the USA, Canada, and Australia, several if not all of the handful of giant alcohol distribution companies across the USA, but we have not executed any formal agreements with any of these companies yet.

PD: What's the next step? It would seem advantageous to hand this off to another party involved in packaging, yes?
Clark: Yes! We have no experience in the alcohol beverage industry so we are learning as we go. Our next step is very clear, honest, and simple; we wish to partner with a company that has the capacity to take what we have for a reasonable and negotiable ownership interest in our company and/or intellectual property, produce Flip Bottles filled with wine, beer, and/or alcohol mixed drinks & sell them to the public!

Refillable Bottled Water is Sourced from Sunlight and Air
Apr 05, 2021