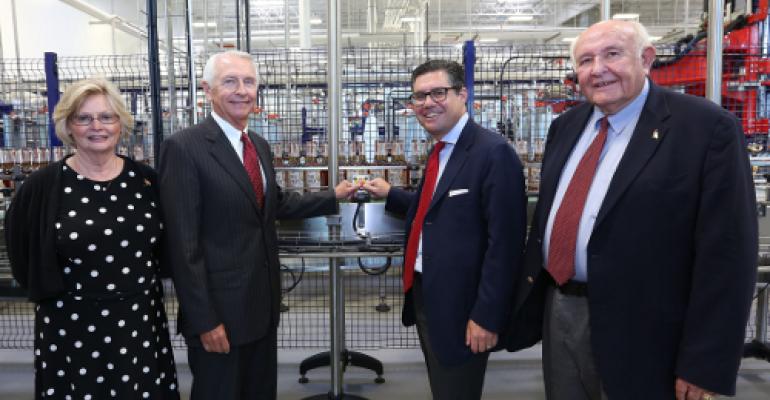 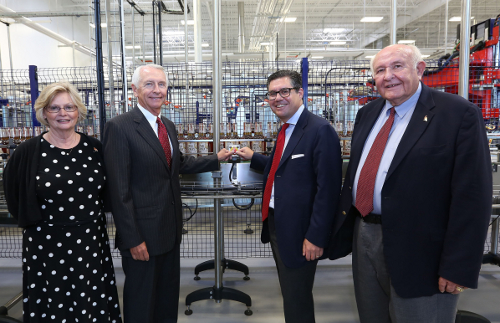 After a seven year hiatus, bottling of one of the most iconic whiskey brands in the world has flown home. Gruppo Campari celebrated the grand opening of its $43 million packaging facility at the famous Wild Turkey Distillery in Lawrenceburg, KY, on Sept. 10, 2013.

Commonwealth of Kentucky Governor Steve Beshear and Gruppo Campari CEO Bob Kunze-Concewitz joined Wild Turkey Master Distiller Jimmy Russell to commemorate the opening of the new facility with help from local dignitaries and distillery employees. The packaging facility is part of a $100 million overall investment that the company has made in facility upgrades during a three year time span.

"Kentucky's Bourbon industry has been growing at a rapid pace, with production of our native spirit up more than 120 percent in the last decade and 5 million barrels currently aging in the Commonwealth," said Gov. Beshear. "The significant investment Gruppo Campari has made at the Wild Turkey Distillery, including the $43 million packaging facility, will not only help grow that number through worldwide expansion of the bourbon category, but will also create valuable jobs for the people of our great Commonwealth."

While creating more than 60 new jobs in the area, the facility provides full bottling and packaging capabilities for all of Gruppo Campari's U.S.-distilled spirits brands, including the Wild Turkey Bourbon line and the company's largest U.S.-based brand: SKYY Vodka. Both immediate and long-term benefits of the new facility include cost efficiencies; improved customer service; more efficient and accelerated innovation opportunities; and added production flexibility through in-sourcing the company's packaging needs.

"After a seven year absence, we are pleased to bring packaging capabilities back to the Wild Turkey Distillery for two of Gruppo Campari's biggest and fastest growing brands," says Bob Kunze-Concewitz, CEO of Gruppo Campari. "By owning the full production process for all of our Wild Turkey brands, we can be more nimble in meeting the growing worldwide demand for not only Wild Turkey, but also SKYY Vodka. We thank the Commonwealth of Kentucky for its cooperation in bringing this facility to life."

"Gruppo Campari's investment in the Wild Turkey Bourbon brand not only demonstrates their commitment to helping Wild Turkey produce our fine Bourbon and Rye whiskeys, but also to the people of Kentucky through job creation and tax revenue," says Jimmy Russell, Wild Turkey Master Distiller. "By having full control of our entire production process from distilling and aging to bottling and packaging, we can focus on what really matters: producing the world's greatest Bourbon."

Since purchasing the brand in 2009, Gruppo Campari has made significant financial commitments to the distillery's operations and its employees that have surpassed more than US$100 million. In 2011, the Company unveiled a US$50 million expansion at the distillery, more than doubling the plant's production capabilities. This was coupled with the opening of multiple new barrel warehouses over the past several years. In 2014, Wild Turkey will open a new state-of-the-art Visitor Center.

The popularity of Kentucky's native spirit has exploded worldwide, with demand for Wild Turkey at its highest level in history. The Wild Turkey brand currently sells more than one million nine-liter cases worldwide (IMPACT Databank), with strong growth in the U.S., Australia, Canada, and Japan. Wild Turkey is the sixth largest global Bourbon brand (excluding sales of American Honey). Wild Turkey and SKYY Vodka are both distributed and marketed through Campari America in the U.S., Canada and Puerto Rico.