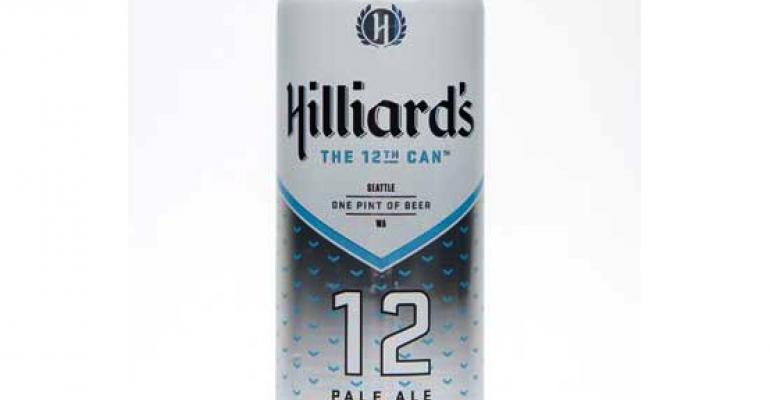 Hilliard's partnered with Crown on the development of a can for the brewer's latest pale ale - The 12th Can - whose design reflects the colors of Washington's local professional football team.

A loud and raucous crowd in a football stadium can disrupt and confuse a visiting team as effectively as if the home team had a 12th man on the field. It's not surprising, therefore, that during the football season brands turn to eye-catching can designs to engage fans across the country. CROWN Beverage Packaging North America, a business unit of Crown Holdings Inc., recently partnered with Hilliard's Beer in Washington state on a unique can design that aims to capture the attention of the local professional football team's avid followers.

Creative packaging design has long been an effective tool through which brands are able to connect with consumers by creating an association with popular sports or activities. In particular, advances in high-quality printing enable brewers to depict striking graphics and even photo realistic images of teams or players on beer cans, leading to a new range of promotional and limited edition designs that target a devoted fan base. For Crown, this has proven an effective means to help local craft breweries expand their product portfolios ahead of major sporting events."Enjoying a cold beer before - or during - a game is a long-standing tradition for sports enthusiasts, and it's only logical that fans would value package designs that reference their local teams," explains Brian Thiel, craft brand manager at CROWN Beverage Packaging North America. "Sporting events are extremely popular, but packaging formats like bottles are often prohibited for beverages served on site. Cans do not face such prohibitions, however, as they are 100 percent and infinitely recyclable, so fans can enjoy their favorite beer at a game while rooting for their teams and still being environmentally responsible."

Ahead of Super Bowl XLVIII, Crown worked with Hilliard's Beer to create a can design that is targeted at local supporters. The Crown team provided vital counsel on key elements of the package design and development process, including the overall look and feel, color schemes and also the proper ink weights necessary to achieve the best printed effect.

For Seattle-based Hilliard's Beer (www.hilliardsbeer.com), canned brews have always been an important part of their business. Over 70 percent of their national beer sales come from places other than restaurants and bars, and cans have helped the brand reach consumers outside of these establishments. Hilliard's partnered with Crown on the development of a can for the brewer's latest pale ale - The 12th Can - whose design reflects the colors of Washington's local professional football team.

"We have been canning our beer since we opened in 2011 because cans are better for the beer and better for the environment. We recently turned to Crown because of their incredible flexibility and strong product support," explains Ryan Hilliard, founder of Hilliard's Beer. "From the initial conception, it took only two months before we had The 12th Can on store shelves, and the reaction has been fantastic - it has certainly exceeded our expectations."

The 12th Can, by Hilliard's Beer is sold in 12-packs of 16oz. cans in nearly every grocery store in the Pacific Northwest.

To learn more about the benefits of metal packaging for the craft brew industry, see http://www.crowncork.com/craftbrew