This material, or that? 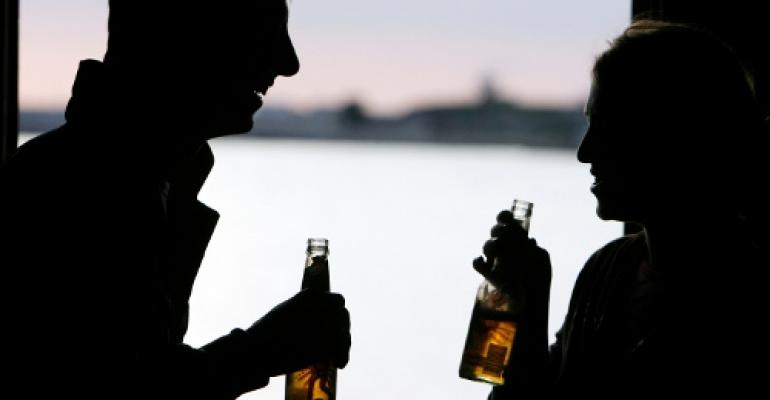 Beyond the numbers...Companies consider many factors when deciding which type of package to use for their products, including consumer preferences and usage occasions.
Allied Development Corp. has developed the SavvyPack Service, consisting of a database, software, and analysis, to compare packaging options.

It's never easy to reconcile competing claims for different packaging materials in the same application. You need to take many factors to take into account, including package performance, system economics and, today, the environmental impacts.

To help with objective comparisons, Allied Development Corp. has developed the SavvyPack Service, consisting of a proprietary database, software and in-depth analysis. It compares packaging options at every step, from converting to disposal, in many different aspects. In recent years, Allied Development heard frequently from industry participants frustrated with the continuing onslaught of seemingly undecipherable and contradictory claims for package performance. Allied Development used its SavvyPack Service to reverse engineer these claims to understand their origins and how to reconcile them. Thus, the SavvyPack Index and the corresponding methodology were developed.

"One of the most interesting findings of this work smashed a paradigm," says Allied Development president Steve Mogensen. "While working on these claims, we discovered that most people believed the differences in the competing claims were due to sophisticated or complex differences in analysis or assumptions. However, just the opposite turned out to be true. When we reverse engineered these analyses, we found the basic analyses to be the same. What changed was the emphasis that different industry participants placed on different metrics."

Beer match up
Two factors drove Allied Development to choose beer in glass versus PET as the first topic for its new EEs of Packaging report series. First, one of the most intense rivalries in packaging materials has been between glass and PET beverage bottles. More specifically, the PET bottle industry has been trying for more than a decade to take market share from glass bottles in the beer industry. Second, the competing claims between the two industries have been equally contentious. Thus, the new study from Allied Development examines glass and PET 12-oz bottles for beer.

The details in this case involved selecting the specifications for the bottles to be compared. These specifications are particularly tricky for PET bottles, due to the variety of solutions that have been tried. Allied Development recently completed its market study entitled "PET Bottles" that examined the trends and specifications of PET bottles used in the beer industry.

At this point, PET beer bottles are mostly used in the United States at public outdoor venues, like sporting events and concerts, because they're safer than glass. But beer is sensitive to oxygen, and monolayer PET does not provide enough protection for adequate shelf life. This is why almost all beer sold in PET in the U.S. is bottled in multilayer containers, which usually include an oxygen scavenger layer. Thus, this PET bottle was selected for the study. (There are other technologies available, including interior coatings, but these are not in general use in the U.S. and were not considered in the Allied Development study.) This mode of construction drives the price up.

That situation is reflected in the study: It says that a 12-oz glass bottle costs 4.7 cents less for a brewer to buy, and 5.4 cents less overall once it's filled, than a PET bottle. This price advantage probably is a big part of the reason for the dominance of glass in this application, especially with lower-end beer, which tends to be price-sensitive.

The Allied study is divided broadly into three parts: economics, environmental and package performance. It seeks to be as thorough as possible, which is evident from the first major comparison, of manufacturing costs. Factors like utilities, transportation and even office supplies are taken into account. Allied developed the categories, and the data to plug into them, through interviews and surveys of suppliers, producers, end-users and other industry participants, as well as secondary published sources. 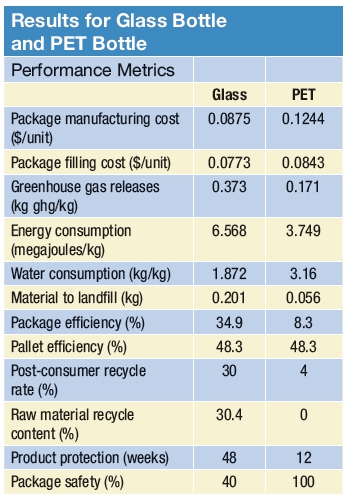 In the cost comparison, as noted above, glass comes out as more economical, with a "total packaged cost" of 31 cents per filled bottle, compared with 36.4 cents for filled PET bottles. The biggest single difference between the two is in material costs, which stand at 25.18 cents for glass and 30.15 cents for PET. This 4.97-cent difference mostly stems from the fact that glass bottles are made from a single material, produced in high volume, while the PET bottles under consideration are made from four different resins: a PET layer, an ethylene vinyl alcohol (EVOH) layer for oxygen barrier, an oxygen scavenger and a tie layer for binding.

The difference in material costs accounts for almost all of the advantage glass enjoys over PET in "filling cost" (5.35 cents). The biggest single advantage PET has in Allied Development's filling cost calculation is for "distribution packaging costs," a margin of 0.5 cents.

The second broad category is environmental. Here, the study applies life-cycle analysis to compare the environmental impacts of factors from selection of raw materials through disposal. These are grouped into four major categories: energy consumption, release of greenhouse gases, water consumption and end-of-life.
Energy consumption is translated into megajoules (MJ) for all aspects, from raw material manufacturing to transportation. Glass comes out to 6.57 MJ for a 12-ounce bottle; the figure for PET is 3.75. The biggest single difference is in the amount of energy required for actually manufacturing the bottle, which comes to 3.69 MJ for glass and only 0.21 MJ for PET. This is a function of the high levels of heat needed to melt and blow glass.

Drinking it all in
The study next compares how the manufacturing, processing and handling of each bottle affects the release of greenhouse gases. Here, PET has a slight advantage: 0.17 kilograms of greenhouse gases (kg GHG) per bottle, compared with 0.37 for glass.

The next comparison is for water, where glass has the advantage: 1.87 liters to produce, fill and transport a glass beer bottle, vs 3.16 for PET. The major difference is in raw materials; the study claims that the plastics in this application use more than three times as much water as glass. 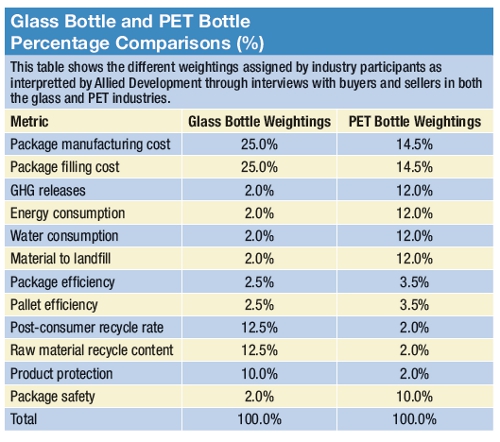 Another comparison is for end-of-life. The metric is kilograms of landfilled material per unit; in other words, for every bottle produced and filled, how much material will probably end up in a landfill? The study assumes a recycling rate of 30 percent for glass bottles and only 4 percent for the PET bottles, because of the difficulty of recycling multilayered plastic. But even with this advantage, PET beats glass: It comes out to only 0.056 kg of landfilled waste per unit, compared with 0.201 for the heavier glass.

The study then takes on the question of how to rate each package. As it notes at the start, whenever competing materials are available for a packaging application, the industries that supply those materials naturally make claims that their materials are the best. Allied Development acknowledges the situation and does two comparisons, one weighted according to the factors favored by glass suppliers, the other weighted for PET. For example, both "package manufacturing cost" and "package filling cost" receive a weight of 25 percent for glass but only 14.5 percent for plastic. Conversely, "package safety" gets a 10 percent weighting for PET but only 2 percent for glass.

Perhaps not surprisingly, each material comes up on top when different factors are weighted in its favor. The study converts the overall effectiveness of each kind of bottle into a "SavvyPack Index," a simple scale from 1 to 10. By this measure, when factors favored by the glass bottle industry are taken into account, glass beats PET by 5.6 to 3.8. When the weightings are applied in favor of PET, it edges out glass, 6.4 to 5.9.

Determining these weightings is a critical part of the SavvyPack Index methodology.

"We evaluated both qualitative and quantitative responses, and selected the weightings that we thought best represented the information we got in our interviews," Mogensen says.

Pan Demetrakakes has covered packaging for the trade press for almost two decades.