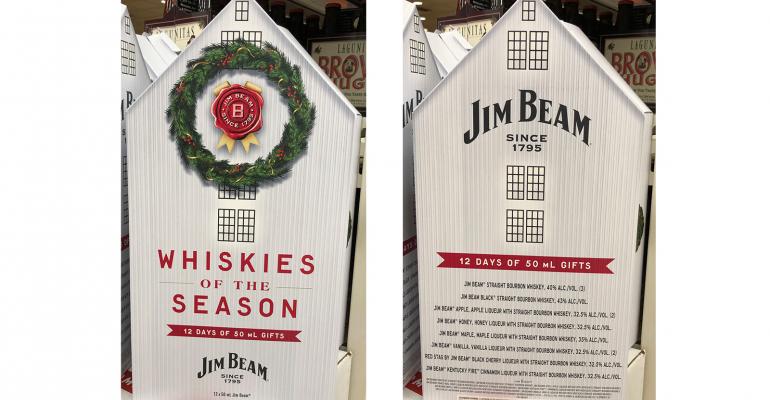 Whiskies of the Season is an impressive packaging of 12 days of 50mL gift bottles that’s worth toasting.

When out and about doing any kind of shopping this time of year, you can’t help but notice the eye-catching displays of limited-edition products and especially packaging aligned with the Christmas season as brands and retailers aggressively leverage the largest binge-worthy holiday opportunity of the year.

It was on a recent outing to a local Target Store that a package standing heads and shoulders among others in the front-of-store display of seasonal packs got my attention: a large and impressive stand-up, book-style microfluted package of Jim Beam’s Whiskies of the Season. Rather than rectangular, the distinctive package is designed with gables.

The attraction proved to be more than superficial after I quickly discovered the packaging delivers a lot of details and personality apart from the classy, irresistible allure of a tasteful on-shelf presentation.

We explore it from the outside in, with an assist from Kim Hanson, senior customer marketing manager for national accounts at Beam Suntory, who sets the stage in summarizing the reasoning for the packaging.

“Recognizing the growing trend around Holiday Novelty concepts and that national account customers are more and more interested in innovative offerings, we wanted to deliver a new and exciting gifting option for our loyal Jim Beam consumers,” she says. “We figured there was no better way to promote our range of bourbons than by highlighting our iconic rackhouses in Kentucky.”

According to the internet, a rackhouse—which I found to my amusement was also known as a rickhouse—is “a structure that holds barrels of alcoholic beverages during the aging process where barrels are typically stacked on their sides, often up to several stories high.” 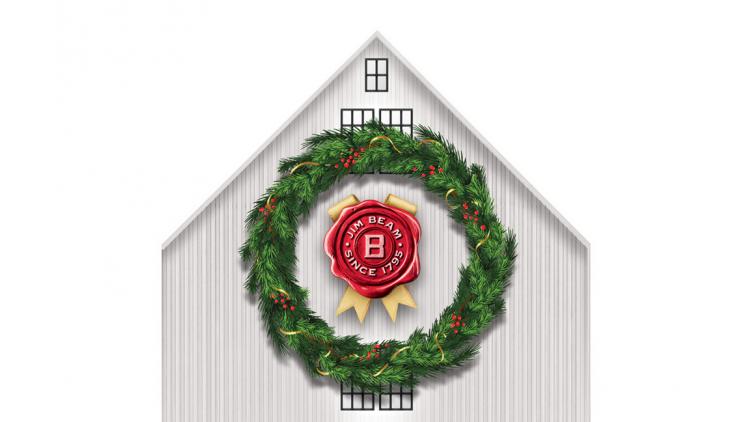 That’s why in appearance and shape the pack looks very building-like while retaining a high-end gift-package motif; the white and light-gray striped building’s facing is adorned with a printed wreath surrounding the brand emblem figuratively “hung” near the top of the front gable.

Below the wreath is the bold product name and below that is the tagline of “12 days of 50 mL gifts.”

The backside repeats the rackhouse motif along with a detailed listing of the samples inside, which include three Straight Bourbon Whiskeys and two each of Jim Beam Apple and Jim Beam Vanilla.

The package has a tamper-evident sticker that repeats the branded wreath element on the side that seals the hinged front and back sections together.

Next a look at the even more impressive inside.

In the name of full disclosure, you should know that this isn’t the first time the brand has done a gift pack like this.

“We launched this pack last year and brought it back this year,” Hanson says, pointing out that while the overall package structure remains the same, “we refreshed the creative slightly this year to align with our current Jim Beam global creative.”

A quick online search revealed last year’s pack; my take is that “slightly” is an understatement and that the brand really upped its game in 2019 via a dramatic exterior makeover moving from a dark to light color scheme both inside and out that better positions it as more upscale (you can follow this link to an unboxing video from a year ago).

The packaging design was handled by Proof, Beam Suntory’s internal creative agency, according to Hanson. 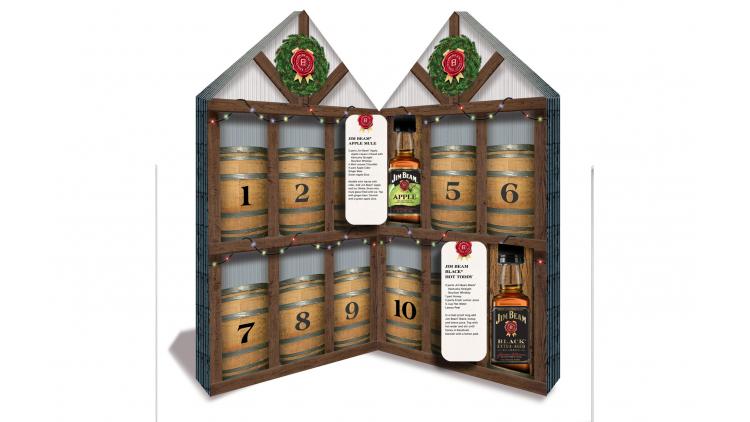 When opened, the giftpack book unfolds as a left-and-right spread display of 12 numbered printed barrels, all neatly stacked upright in two rows inside the rackhouse, six to a side. The interior is the same combination white/gray color as the exterior, and additionally is also printed with wooden beams; a branded wreath is “hung” from both gables.

Each printed barrel is a perforated compartment covered by a barrel-printed flap that opens up to reveal the 50mL plastic bottle of whiskey nestled inside. The back-of the barrel flap is printed with a recipe; for example, the barrel #2 flap (shown) shows how to make a Jim Beam Bourbon Sour. A nice detail is that there’s a small cutout for a finger hold to permit easy opening of the perforated compartment flap. 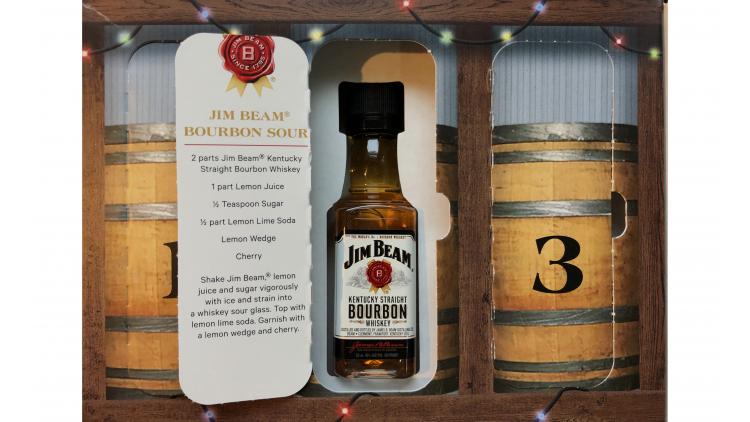 Hanson says the varieties remained the same this year as last.

How long did the packaging development take? “13 months is the average time to execute a package project,” responds Hanson. “These projects can take quite some time to finalize, and they require collaboration across multiple departments.”

The good news is that the brand has a 3.0 version scheduled for next holiday season.

Depending on state pricing, the suggested pricing is $17.99.