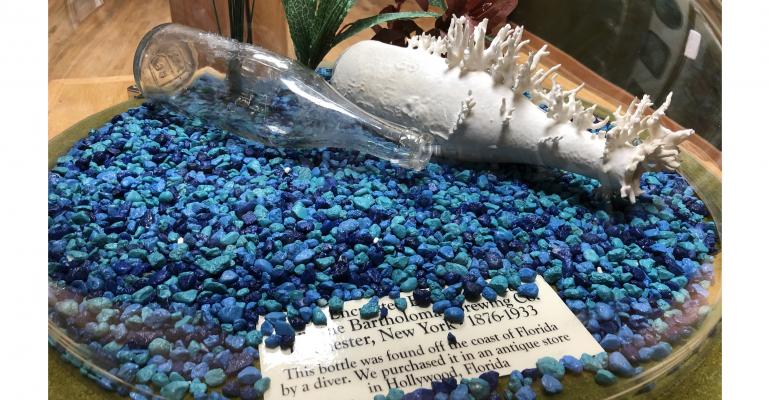 Fate and nature turned an ordinary glass beer bottle into a work of art good enough for museum display.

Decades after being tossed into the Atlantic, a beer bottle transformed in a unique way ends up on display 1,500 miles away in a Wisconsin museum.

Packaging Digest debuts an informal series highlighting an assortment of unusual, even freaky things, from throughout the wide world of packaging.

Our first tale presents a unique kind of buried treasure that starts with a bottle from a now-shuttered New York brewery that ends up, decades later, in a Wisconsin brewery—after spending some time on the Atlantic seabed off the coast of Florida.

Originally it looked like any other glass beer bottle, but that was before fate and nature intervened and painstakingly turned it into something extraordinary and uniquely artistic.

I came across this one-of-a-kind coated glass bottle in a brewery display while on a daytrip getaway in early July to the quaint city of Monroe, WI. It was part of the classy exhibits in the impressive beer museum at the Minhas Craft Brewery, which stakes a claim as the Midwest’s oldest brewery and the second oldest in the nation. It was displayed alongside a standard glass bottle in case visitors needed a visual comparison.

A card seen in the accompanying photo informs inquisitive visitors like me that this bottle originally belonged to the Bartholomay Brewing Co., Rochester, NY, which operated from 1876 to 1933. It also states that the bottle was plucked from the Atlantic off the coast of Florida then ended up in a Hollywood, FL, antique store from which it was purchased by the brewery. 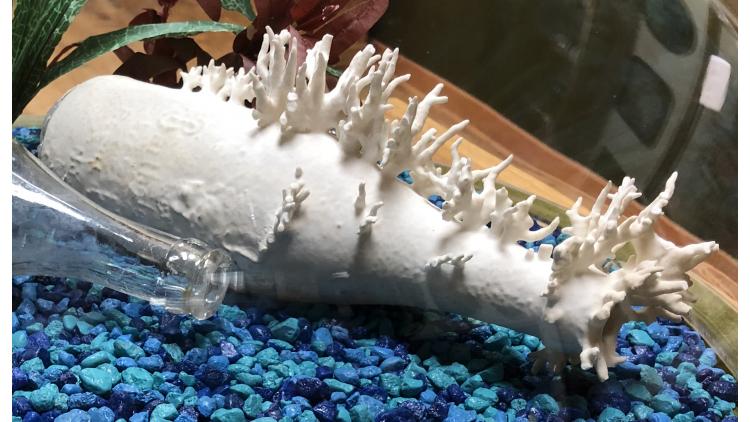 The coral had renovated the bottle between the drop into the drink and the pickup by a diver into the one-of-a-kind beauty you see—the nature-made artistry makes it a wonder to behold.

For those who appreciate the science behind the process, here’s a two-step edited summary of what happened according to the how coral reefs grow page of the Coral Reef Alliance (CRA):

The site notes that different species of coral grow at different rates depending on water temperature, salinity, turbulence and the availability of food.

I left a question at the CRA website per instructions there and received a response within 24 hours: the spokesperson suggested the coral-making process “took several years if not longer,” but that’s all that could be deduced from the photo.

Coincidentally and on a personal note, my youngest brother who once lived in WI made his home in Hollywood for a number of years until relocating about a year ago a short distance away along the Florida coast.

Let us know if you’ve come across unusual packaging you’d like us to consider for a future Freaky Fridays column; my email is below.