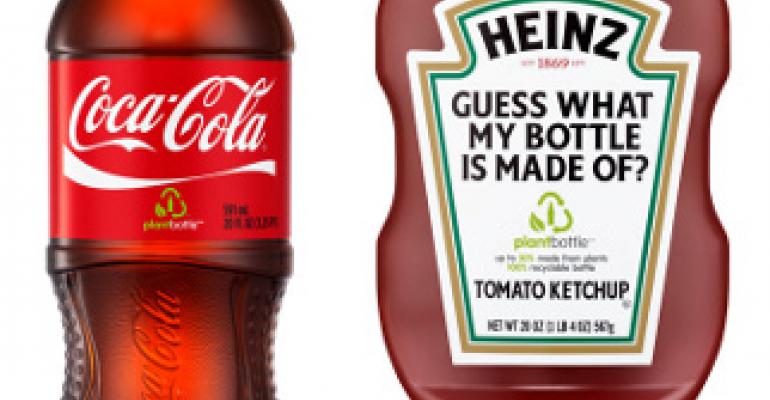 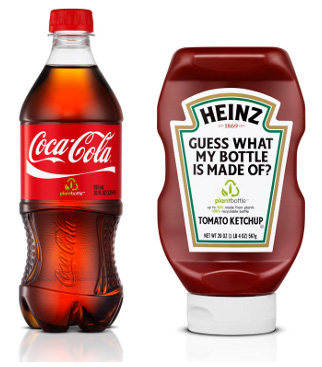 H.J. Heinz Co. has announced the biggest change to its ketchup bottles since the company first introduced its plastic packaging in 1983. Heinz is planning to convert all 20-oz ketchup bottles to PlantBottle packaging in the U.S. this summer. The new packaging is the result of a strategic partnership between the Coca-Cola Co. and Heinz.

The partnership enables Heinz to produce its ketchup bottles using Coca-Cola's PlantBottle packaging. The PET plastic bottles are made partially from plants and have a lower reliance on non-renewable resources compared with traditional PET plastic bottles. Coca-Cola says, the partnership is an industry-first and one that both companies hope others will follow to transform how food is packaged around the world.

PlantBottle packaging looks, feels and functions like traditional PET plastic and remains fully recyclable. Coca-Cola stresses that the only difference between a traditional PET bottle and a PlantBottle is that up to 30 percent of the material is made from plants. The plant material is produced through an innovative process that turns natural sugars found in plants into a key component for PET plastic. Currently, PlantBottle is made using sugarcane ethanol from Brazil.

"The partnership of Coca-Cola and Heinz is a model of collaboration in the food and beverage industry that will make a sustainable difference for the planet," said Heinz Chairman, president and CEO William R. Johnson.

Muhtar Kent, chairman and CEO of The Coca-Cola Co, agrees: "Our partnership with Heinz is paving the way for industry-wide collaboration. This partnership is a great example of how businesses are working together to advance smart technologies that make a difference to our consumers and the planet we all share."

Heinz will launch PlantBottle in all 20-oz ketchup bottles in June with labels encouraging consumers "guess what my bottle is made of." Packaging will be identified by a special logo and on-pack messages.

Coca-Cola first launched PlantBottle in 2009 on brands that include Coke, Sprite, Fresca and Dasani water. By using PlantBottleTM packaging across multiple brands, the company has significantly reduced their dependence on non-renewable resources. An initial life-cycle analysis conducted by Imperial College London showed that the use of PlantBottle packaging provides a 12 to 19 percent reduction in carbon impact. In 2010 alone, the packaging eliminated the equivalent of almost 30,000 metric tons of carbon dioxide, or approximately 60,000 barrels of oil.

Currently, PlantBottle can be found in nine markets including Canada, Mexico, Chile, Brazil, Japan, Denmark, Sweden, Norway and the United States. The Coca-Cola Company plans to expand to over a dozen new markets in 2011.