I’ve been doing some thinking on how the recycling system could be improved here in the U.S., increasing the amount and scope, and I’d like your thoughts. There are some great models out there. But which way is best, for all involved, on both the producer and consumer ends?

At TerraCycle we’ve begun expanding operations into other countries, so I’ve been learning about what’s happening, and it’s intriguing. But I wonder, will it work here, or more like, will it be allowed to work here?

Germany’s Green Dot, which in France is called Eco Emballages, (www.ecoemballages.fr/outils/eco-emballages-in-brief/) dual recycling system is among the biggest and most comprehensive out there. Started in 1991, it’s been amended a number of times to reflect the changing packaging landscape, consumer preferences and various adjustments to better fit current day reality. Basically, if you manufacture products that use packaging in Germany, you have to pay a fee that varies depending on the type of material, how much it weighs and the volume of it produced annually. If your packaging is “eco-advantagious,” you don’t have to pay. 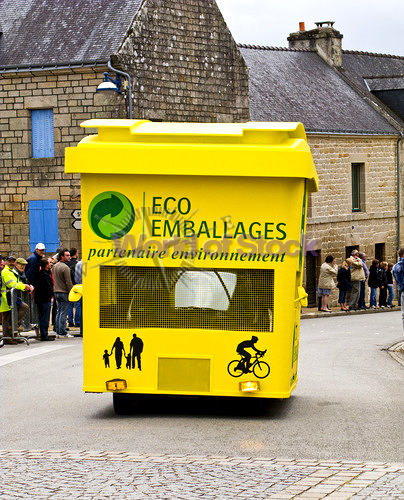 Do you see where this is going? The greener and lighter the packaging, the less you have to pay. And the rest is much more likely to end up somewhere else than the landfill.

The yin yang looking Green Dot logo is becoming as common as the “chasing arrows” symbol, but doesn’t mean that a product is necessarily recyclable. It just means companies have paid their licensing fees to be a part of the system, and that DSD and other organizations will collect and if possible, recycle this packaging.

Does it make a tangible impact? Absolutely. In 2008, 48 percent of municipal solid waste got recycled. 35 percent got burnt for energy (the jury’s out on how cleanly that can be done), 17 percent of it was composted and only 1 percent actually went to landfill.

It starts out in a familiar way: People pay from 8 to 15 Eurocents for various types of reusable bottles, getting their money back via “reverse vending machines,” the packaging reused between 15-50 times before being recycled.

Local municipal recyclers collect the majority of the rest of the typically recyclable things. It’s gone the opposite of the single bin approach that’s so popular here in the U.S.: There are separate bins for plastic, paper, non deposit glass by color (like jam jars), biodegradable and compostable, and for the odd bits that don’t fit (like cigarette butts and tampons), the morbid “incineration bin,” which means things destined to be burnt for energy.

But then there’s a number of packaging items that aren’t part of the deposit return scheme or aren’t recycled by the local municipal system. This is where DSD steps in and takes care of what member companies are paying a Green Dot licensing fee to have taken care of. It too typically is recycled in some way.

All of this has meant that 99 percent of all waste that people generate does not go to the landfill.

But would this translate in America?

The U.S. recycling system has been all about single stream “blue bin” recycling, making it easier to do. Thus, the logic goes, more of it gets recycled. True, but without consumers sorting, and Chinese recyclers being happy to take mingled waste streams, it’s become an expensive endeavor, the burden almost entirely carried by local municipalities, meaning typically that less recycling gets done, and a shrinking range of products are processed.It seems simple to me: Reward consumers more for returning packaging to be reused (and thus reducing the new packaging costs on the company end), ask them to do a little more pre-sorting of the other materials, and both make sure the other bits get collected while at the same time incentivizing lighter, more eco-friendly packaging by companies, to reduce their packaging fees.

But would this pose an unbearable financial burden on companies, causing lost jobs and hurting consumers because of passed on costs? Please. This is the same sort of arguments that car companies used when talk of requiring seat belts began. They’re still here.

The advantages are many: A recycling system not so dependent on the economy, the capacity of local recyclers and less of your packaging, your brand, your identity ending up in the trash, on the streets or the ocean.

What are your thoughts on this? How can companies, municipalities and the consumer all play a part in more responsible, thorough management of the packaging we all create, consume and contend with?