Capping a relationship, just in time

In marketing, a product introduction–especially on a worldwide scale–usually means casting cost to the winds. Subsequent sales usually keep this attitude from turning fatal when the invoices start arriving.

No such luxury exists at the Palo Alto, CA, headquarters of Hewlett-Packard, whose $4 billion annual R&D spending includes mistake avoidance provisions. Operating in a worldwide arena, H-P says it hates even the smallest mis-step.

Enter Compaq Computer Corp. Merged into H-P in May, 2002, Compaq readied introduction of the Compaq Presario Home Internet personal computer with a September, 2002 North America launch, October in Europe and then, everywhere else.

Charged with the successful coordination of its consumer PC packaging worldwide but now faced with the seamless merger embodied in the Presario is Bill Kropf, H-P worldwide packaging project manager for consumer PCs global business unit. With other H-P officers, he's responsible not only for the product introduction, but also with finding ways to provide synergies and a reduction in overall operating expenses.

With Randy Boeller, commercial packaging manager at H-P Houston, an idea was born. It is to design the computer component package with expandable polystyrene endcaps that Tuscarora, already an H-P preferred supplier, had previously designed for Compaq.

Chopping off time
While this may not sound revolutionary, it helps chop more than four months off the time to introduction in all markets, originally slated to start the next month, Bill Kropf informs PD, and at an overall 40-percent reduction in packaging costs.

Kropf explains that while most PC models currently use a slightly different endcap configuration, he believed it might be possible to develop a consistent design that could be used with several H-P/Compaq computers to minimize tooling costs, reduce part numbers and create other efficiencies; a system he calls "value capture." The Presario launch thus becomes the first test of his theory. 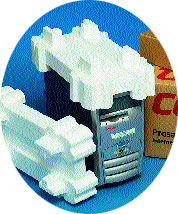 Complicating the task is the need to develop, test and coordinate all specifications for components supplied to the 11 H-P plants worldwide. And all of this had to be done in an eight- to 10-week period.

Kropf notes that the choice of endcap maker Tuscarora was a critical part of the program. "They were already our number-one custom foam molder in North America," he says. "Tuscarora's global capabilities were key to my ability to expand into Europe."

Through its parent company, SCA, the supplier adds to its 40 locations in North America SCA's 200-plus packaging sites in Europe and 20-plus in Asia. One clear advantage becomes the supplier's ability to also provide secondary packaging in its European and other markets because of SCA's product range.

Common specs
For North American distribution, RSC shippers are produced by International Paper and Smurfit-Stone Container Corp. to a common specification: double-wall B/C-flute of 275# test, with a 48 ECT. Both are printed flexographically in one color. They also supply a mailer-style internal carton for the keyboard and accessories made with a kraft-bound, 200#-test, B-flute with a 32 ECT. SCA produces the two components for European distribution to similar specs.

Adoption of EPS for the endcaps ends use of the various fabricated materials Compaq had for cushioning its computers for its markets. This standardization alone accounts for a significant segment of the savings, Kropf says, along with his own preference for the material because of its good strength and cushioning qualities.

To facilitate the switch, Tuscarora developed the design for multiuse endcaps. Using Pro/ENGINEER solids-modeling software, design specs were set and sent electronically to computer electronically controlled cutting machines to create foam samples. Delivered to H-P for approval, the samples were concurrently tested in a range of transit and warehouse conditions, assuring protection of the Presarios during shipping and storage. In-house testing provides Tuscarora with immediately available data to help optimize the design and stay on schedule.

Meanwhile, the supplier designed and provided specs for the shipper and inner carton enabling H-P to conduct what Kropf calls the production protorun, as part of the approval process, for the entire packaging system at each factory prior to the production runs. As a result of this capability, the specs were transferred to SCA in Europe, where quick revisions and new samples could be delivered well within the new deadline.

Recognized within H-P for achieving the second-highest cost savings for all consumer PC contributions since the Compaq merger is Kropf's group. He shares credit, noting, "Tuscarora made it possible for me to coordinate this launch so successfully.

"Their ability to do the entire packaging system from beginning to end, the material options, their adaptability, the speed of the tool shop, their ability to coordinate mind-boggling logistics around the world– it was all key. I couldn't have done it without them."