Cheese-pack is sure to please with ease

BelGioioso Cheese, Denmark, WI, has been making award-winning, all-natural Italian cheeses since 1979. Now, all of its sliced cheese varieties are available in new easy-open packaging from Curwood (www.curwood.com). Introduced in early 2007, the line of high-quality sliced cheeses has transitioned out of a tear tape access method into Curwood's Curpolene® 7202 film with an IntegraScore® opening feature, designed to offer a consistent and reliable means of opening the cheese pack. The opening feature initiates and guides scored tearing horizontally across the package for convenient opening with slider zippers or tamper-evident hoods. 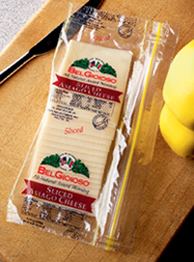 “We are constantly seeking to improve the quality of our packaging without compromising the quality of our cheeses,” says Errico Auricchio, president and founder of BelGioioso Cheese. The company produces and packages its high-quality cheeses in both its Denmark facility and one in Pulaski, WI.

Curwood's Dave Engen, market manager for cheese, describes the Curpolene 7202 film as a 2.6-mil, two-ply, coextruded lamination of oriented polyethylene terephthalate, laminated to a proprietary ethylene vinyl alcohol/nylon coex that offers superior resistance to heat and abuse, as well as superior machinability, and barriers and esthetics for nonrespiring sliced cheeses like Provolone and Cheddar. The Curpolene film family also provides stiffness and can seal through contamination, for an attractive, form-fitting package that allows controlled drawdown to ensure that slices or chunk cheese won't stick to the packaging. One other advantage is the films' outstanding aroma and oxygen barriers that prevent flavor transfer and extend shelf life.

Word has it that BelGioioso will move all of its sliced cheese products to this film structure. The cheese packages' IntegraScore opening feature allows consumers to easily and completely remove a tamper-evident hood protecting the pack's press-to-close zipper. The hood is easily removed when the consumer detaches it from the pouch along a precise score in the outer, nonbarrier film layer. This allows the package to tear in a straight line, eliminating any inconsistencies in opening. By using IntegraScore technology instead of tear tape, BelGioioso is able to reduce its setup time and waste as well as increase machine speeds.

Curwood prints the filmstock for the cheese packages by flexo in five colors with BelGioioso's brand identity, American and Italian flag seal graphic, the bright red BelGioioso logo and nutritional information. The film's clarity highlights the cheese's texture and color to enhance its appeal in the retail case. The press-to-close zipper allows storage in the original package to keep BelGioioso's brand in front of the consumer throughout the product's six- to nine-month refrigerated shelf life.

Exactly how the IntegraScore feature is added to the film is proprietary, but Engen says that it is incorporated into the film before it is sent to BelGioioso for package making. Curwood pre-applies the score lines and the IntegraScore directional tear system, which is engineered to be pre-applied to the film rollstock so that the customer doesn't have to do anything or make any changes to obtain an easy-open package.

According to Auricchio, it's a feature critical to the functionality of the package, which is produced on horizontal form/fill/seal equipment.

Recognized with several awards from the Flexible Packaging Association (www.flexpack.org), the IntegraScore feature can be used to enclose either press-to-close packages like BelGioioso's or can enclose a zipper or slider closure. The feature can be used on standup and traditional pouches and a variety of laminated structures.