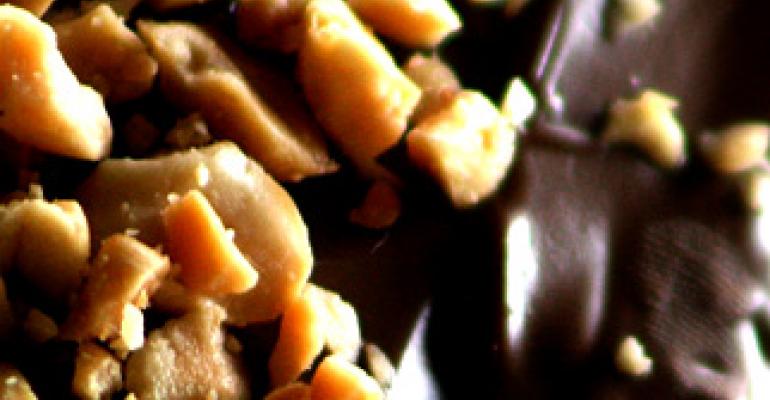 Eleven just might be a lucky number for Hebert Confections LLC, Shrewsbury, MA. It was precisely $11 that purchased the copper kettle, knife, thermometer, table, marble slab and stove that company founder Frederick Hebert used to start the company in 1917. Eleven also is the number of weeks in which Hebert Confections reached full ROI (return-on-investment) on a pick-and-place project for the flow-wrapping line that wraps, codes and counts Hebert Gourmet Chocolate Fully Loaded miniBARS.


Readying for the surge

Hebert's Fully Loaded miniBARS are part of a line of inclusion candies. Inclusions, which are the small items that are added to a chocolate bar such as nuts, toffee chips or cookie pieces, are usually incorporated throughout a bar. For its Fully Loaded candy line, Hebert chose to place the inclusions on the exterior of the bar, which provides two tactile stimuli during consumption. The crunchy inclusions provide the first tactile experience, while the creamy chocolate offers the final tactile experience.

Prior to the pick-and-place project, Hebert manufactured and packaged these miniBARS at a rate of 120/min. This sufficed for demand after the initial offering and during the business' slow period from May to August.


An online survey conducted by the confectioner found that its Fully Loaded chocolates are a favorite among its customers, and Hebert expected heightened demand for the miniBARS when its overall business surged in the fall.

While the confectioner could manufacture the 400 miniBARS/min, Hebert's production was severely bottlenecked at the miniBARS packaging line, which had a top speed of 140 chocolates/min.

At first you don't succeed

Dan Brackett and Dennis Gulliver of the Hebert production team, researched a wide range of options to increase the packaging throughput, including buying another flow wrapper. “But another machine would cost, all said and done, about $100,000,” Brackett recalls.

If buying a new machine was too expensive, the pair had to find a way to get more throughput from one flow wrapper. They noted that manually placing the miniBARS on the wrapper infeed chain was holding the packaging line productivity back. The pair met with outside vendors to learn about how an off-the-shelf solution would eliminate the need for operators to manually place each chocolate square one-at-a-time between the spacing lugs on the wrapper infeed chain. The quotes—at $300,000 to $400,000—were even higher than buying another flow wrapper.


“Then, we brought in eight people—different integrators, different machine builders,” says Brackett. “Each person brought in a different concept of how he or she could increase production. Some suggested belts carrying the product, and others presented solutions using small robots that moved the product.” Of this group of eight, only two returned with quotes and the lowest quote was $120,000.

Gibson Eng. Co. Inc. (www.gibsonengineering.com) took a different approach. Gibson senior automation engineer Sean Merrick presented equipment, including a high-speed picker from Festo AG (www.festo.com), from which Hebert could custom engineer its own pick-and-place system. The picker fulfilled two of the production team's core criteria: It has a high operating speed; and it is easy to operate and setup. To help obtain buy-in for the project, Gibson Engineering lent a demo unit to Brackett and Gulliver for a week.

They used the unit to demonstrate to upper management how a custom pick-and-place system would work. “We [packaging engineers] understand machines and processes,” Brackett explains. Sometimes when we talk machines, financial people or business people don't understand us.”


After obtaining buy-in from upper management, the Hebert production team took only two weeks to design a pick-and-place system and select components. Gulliver wrote a new PLC program, and he and Brackett spent their Labor Day weekend installing the system.

“By Monday, it was running,” Brackett recalls. “Like any startup, it was running kind of rough. But by day two, we were up to full rate. And by day three, we were exceeding rate.”

The Hebert production team did not rest on the laurels of this success though. “We concluded that we could increase output even more if we could release the squares faster,” says Gulliver. “Waiting for them to drop by gravity wasn't fast enough.”


The original design used five venturi vacuum generators each delivering vacuum to 1-in.-dia. silicone-bellows suction cups. Unfortunately, these generators would clog frequently with loose chocolate bits and inclusion pieces. The cups would lose their grip and then drop the miniBAR. Because of this, operators frequently slowed down or turned off the system to remove misplaced chocolates.

“Within a week, he [Ferri] was back with a five-station pump assembly, designed to mount onto our machine using T-nuts,” Brackett recalls. “He had the entire system, including hardware and the proper metric fittings, ready to go. Within 20 minutes, he and the production supervisor swapped out the existing pumps on one head and had the machine running.”


Brackett estimates the cost savings to be about $200,000 compared to third-party-provided solutions. And these are not one-time savings. “Management doesn't get their payback once,” Brackett remarks. “They get it again and again.”

Explaining to upper management how the system would generate savings to pay for itself repeatedly, Brackett states, “Every eleven weeks after [reaching ROI], I'll give you $30,000. As long as we run this product, you're going to get that.”