California Olive Ranch (COR), near Oroville in California's Sacramento Valley, says it's at the forefront of a movement to revolutionize California's olive oil business. Today, the company is America's largest grower and processor of olive oil. “We have two goals,” says vp of sales and marketing Alan Greene, who is on a mission at the 500-acre ranch. “The first is to develop and expand domestic olive oil production. The second is to introduce American consumers to the healthful pleasures of fresh, artisanal, virgin olive oils—something few Americans have experienced.”

To achieve these goals, COR has broken with olive cultivation traditions dating back thousands of years to the eastern Mediterranean. From the earliest times until the late 20th century, olive growers have harvested their crops by hand. Traditionally planted in grooves that provide wide spaces between individual trees, olive trees can grow up to 40 or 50 ft tall, depending on the variety. The olives grow on new wood each year, and olive trees can produce for as long as 1,000 years. By 1500 B.C., Greece was the most heavily cultivated region for olives. During Roman rule, olive trees were planted by hand in the entire Mediterranean basin. In first-century A.D., the historian Pliny wrote that Italy had “excellent olive oil at reasonable prices.”

Explains Greene, “California Olive Ranch was founded by a group of Spanish investors and engineers who pioneered our new approach to olive growing in Spain in 1990. We start with 'high-density' planting of semi-dwarf olive varieties.” 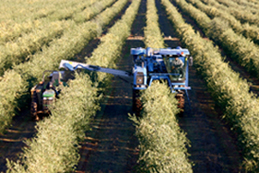 COR takes a different approach to olive growing for its luxurious olive oils, above. Its trees are trellised like grapes in a vineyard, planted 5 ft apart. Bulk totes, below right, protect the oils in shipment and save 50 percent in shipping costs.

Greene says the olive trees at COR are trellised like grapes in a vineyard, planted 5 ft apart along the tree line, with 13 ft between the rows. Trellising involves tying each tree to a single wire at 5 ft. The trees are watered by drip irrigation. This high-density planting enables COR to grow 675 trees per acre, versus the typical 120 trees per acre in a traditional grove, saving 80 percent of the land cost. COR's semi-dwarf cultivars grow 8½ to 9 ft high. After every harvest, the trees are mechanically “topped,” or trimmed, down to 6½ ft. The slightly modified grape harvesters can vibrate all the fruit off a tree in less than two seconds.

COR has also broken with traditional packaging methods for its olive oil by adopting a new bulk shipping container—a 220-gal, collapsible, reusable corrugated SpaceKraft® intermediate bulk container (IBC) from Weyerhaeuser's SpaceKraft (www.spacekraft.com) business. Replacing 55-gal drums, the reusable corrugated bulk shippers are a good fit with the product, Greene has noticed. He says his first thoughts about packaging and shipping the oil included a search for a 55-gal bag-in-box container that had a separate liner in which to isolate the oil. “We also wanted a reusable container to reduce shipping costs,” he says. “When we saw the SpaceKraft corrugated containers, we knew we had what we were looking for, once we could convince our customers to try them.”

COR began using the bulk container in October of 2005. It consists of three main components: an outer corrugated sleeve; an inner film liner inside a corrugated cassette; and a corrugated top cap. The collapsible, outer corrugated sleeve is made by a patented process that continuously winds eight plies of A-flute corrugated (69# linerboard and 36# medium) into a seamless, outer box. This design eliminates the manufacturer's joint, often considered a weak point, as well as any wood components or metal staples. Measuring 42.75342.75333.5 in. OD, the container fits on a standard 46-in.-sq pallet. The 3-ply, food-grade liner is made by Scholle Corp. (www.scholle.com) of two inner plies of 3-mil linear low-density polyethylene (LLDPE) and an outer, single ply of a 4.2-mil biaxially oriented nylon laminate, which was selected for its extra toughness.

Olive oil is susceptible to oxygen, light and time, and Greene realized from the start that COR would need the flexibility to sell in bulk as well as in its own brand of tall, svelte, 500-mL bottles for retail distribution on the West Coast and to selected specialty shops across the country. The bottles are also available directly from the company's website, www.californiaoliveranch.com. “The bulk customers offer other olive oil brands or they blend ours with other sources of olive oil to offer the retail and foodservice marketplace,” notes Greene. 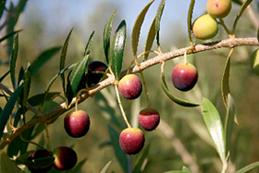 “Fifty-five gallon drums were the most commonly used, semi-bulk shipping containers in this business,” he continues. “But it seemed to us that in 2004, there must be a better bulk shipping solution than heavy, rigid, hard-to-clean drums.”

In traditional olive groves, 40 people can pick an acre of olive trees in one hour, producing a yield of two tons. At COR, two operators take less than an hour to pick an acre of olives, and the yield is five tons—two-and-a-half that of a traditional grove. “We eliminate ninety-five percent of the labor costs in addition to eighty percent of the cost of the land,” Greene says.

According to Greene, COR's new-fangled picking system has another advantage in that olive pressing can begin within 90 min of the harvest. “Reducing harvest-to-pressing time like this sets a new standard for freshness,” he says.

Fresh, flavorful and American-made, the olives planted in 1999 on the 500-acre ranch harvested their first crop in 2004. COR processed and produced its first artisanal extra virgin olive oils in its on-site mill. COR's grape harvesters convey the picked, cleaned olives into a field truck running next to the harvester. When a truck is filled, it takes the olives to the mill where they are crushed in a hammer mill then squeezed in a horizontal decanter. A vertical centrifuge provides the final separation of oil and water, and filters out any remaining particulates. The olive oil is then transferred through stainless-steel pipes to one of 12 15,000-gal stainless-steel storage tanks located in a state-of-the-art, climate-controlled processing room.

After the harvest is completed, batches of 12,000- to 15,000 gal of fresh olive oil are transferred between the tanks every seven days in a process known as racking. This provides a final settling-out and filtering of the oil. Blending of different batches of a common cultivar, or blending of two types of oil, is also done in the tall tanks.

“The trick is to minimize transferring and 'roiling' of the oil until its final packaging,” Greene explains.

The IBCs are supplied to COR flat, 12 to a pallet. “The corrugated cassettes with new liners are also sent with the pallets,” notes Greene. “So the containers take up minimal space compared with drums or other rigid totes.“

Prior to filling, the IBCs and the pallets are delivered to COR's processing floor by a forklift. The forklift operator sets up an outer container sleeve on the pallet, inserts the corrugated cassette and liner and connects a 2-in., food-grade PE hose from the appropriate storage tank to the 2-in. fill valve in the top of the bag liner and opens the dispensing valve on the storage tank.

While the liner expands as it fills with olive oil, the IBC takes roughly 15 to 20 min to fill completely.

“We sell by weight,” Greene adds, “and we tare the pallet and container before filling.” When the liner is visually full, the operator shuts the tank's dispensing valve and disconnects the filling hose. The bag's headspace is then flushed with inert nitrogen, and the operator closes the liner valve. Once the IBC's overcap is applied, the filled bulk container is forklifted to a holding area where it is weighed. Then, the staff generates a shipping label that includes the product name, the lot number, the container's fill volume, the date the IBC is filled and other relevant information. 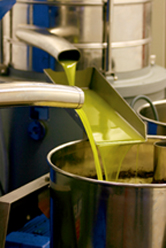 Olives ride a bulk elevator from the groves to processing area of the plant, top. Extracting the oil, above, involves a centrifuge that removes any remaining water. Oil leaves the centrifuges and transfers to a tank that feeds a pipe leading to oxygen-free, temperature-controlled storage tanks.

The filled containers are stacked two- and three-high in a climate-controlled staging area until they're ready to ship.

“Once customers use the totes, they want to keep the totes,” Greene says. He admits, however, that COR met with considerable resistance when it first tried to bulk-ship the olive oil to individual customers. “But some customers said they saw the advantages of the SpaceKraft totes over fifty-five-gallon drums. They all said they liked the totes, but that they were used to metal drums or that they didn't have time to teach operators how to use them.”

“Once customers actually received a shipment in the IBC, and saw how easy and quick it was to empty and how simple it was to remove the used liner and collapse the shell, they were sold on the bulk containers.”

While the traditional approach is fine, Greene says it's good to keep an open mind to new ways of doing things. “The new bulk containers reduce the cost of shipping by fifty percent versus fifty-five-gallon drums,” he says. “There's no cleaning or maintenance involved, and we're getting four or five trips out of the containers.”

As for COR, Greene says he has been looking for a second 500-acre site where the company can plant a second high-density olive grove with another processing mill.

“The sky's the limit out here for olive oil expansion,” he summarizes.