Color-rich, new look in a Jiffy 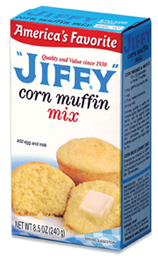 Nowhere else is packaging more critical to products sales than at Chelsea Milling Co., the Chelsea, MI, maker of Jiffy® prepared baking mixes in the “little blue box.” Chelsea Milling doesn't advertise to consumers and never has. Instead, the 77-year-old, fourth-generation food manufacturer relies on its core principle of providing quality and value to its customers, as well as attractive packaging to prompt brand awareness.

Recently, it decided to revamp the graphics on its venerable, little blue box that holds the assorted mixes, keeping core principles intact, while maintaining its place as a leader in its sector. The absence of advertising makes the visual appeal of the baking mix carton even more critical. Vertically integrated Chelsea Milling created a printing division in 1970 called C&S Carton (www.jiffymix.com), located about 60 miles away in Marshall, MI, to help control the quality and cost of paperboard carton “shells” encasing the Jiffy product line.

Although not a typical converter, C&S Carton faces many of the same challenges, most notably increased quality demands and requests for faster turnarounds, while keeping costs down. Now, with 24 prepared mixes in the Jiffy product line, C&S prints the shells, or cartons, for every one—about 1.5 milllon packages are produced daily, 42-up on a sheet, per 10-hour shift. This amounts to about 300 million paperboard shells annually. Prepress work is handled on by an outside source; C&S prints onto recycled clay-coated boxboard and then strips and cuts the board before it ships the shells flat to Chelsea Milling.

The move to update the graphics ultimately lead to the purchase of a six-color, 77-in.-W Harris press (from Heidelberg Equipment [www.us.heidelberg.com]) to replace an older five-color model, and to the press' integration with an EPG KeyColor system from Essex Products Group (www.epg-inc.com) for advanced color control. The KeyColor is a digital system that enables user-friendly ink-key adjustments from a central console to control color, speed makeready and to reduce waste. Essex Products Group has been designing and manufacturing integrated color-control systems for more than two decades. The company's KeyColor remote ink control systems are integrated into original equipment worldwide and can be installed as retrofits.

“We were running a five-color, seventy-seven-inch Harris press from 1970 until about two years ago; it had cloth dampeners and was badly in need of major repair,” relates Don Stephan, plant manager of C&S Carton. “When we went to proof the new graphics on our shells, the owner realized we couldn't reach the color quality and the brightness of the red on the flag element that he wanted to achieve. So we replaced the press with another seventy-seven-inch Harris, a six-color system this time, and upgraded it with the EPG system and Dahlgren [817/267-0009] dampeners.” 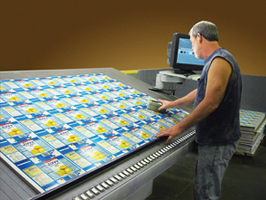 A captive printing operation, C&S prints the Jiffy blue boxboard in six colors, including three process plus three spot colors—a dark blue, a background blue and a red specially formulated for Jiffy. Six EPG Smart Fountains, one for each of the six units on the press, control the ink keys. Each Smart Fountain controls 59 ink keys. Prior to the installation of the EPG system, “in order to accommodate normal variation during a press run, the operator had to manually adjust hundreds of ink keys by hand,” says Jack Kennedy, vp of operations. Not all 59 ink keys had to be adjusted on each unit every time, but a majority of them had to be changed.

Gary Hoag, C&S Carton production supervisor, says, “It has also reduced overtime, because we are running much more efficiently.” Revamping the Jiffy carton's graphics was the main reason management decided to purchase the Heidelberg six-color press with the EPG system. The team was looking for a fresher, more modern and livelier look, without abandoning the lineage of the Jiffy brand franchise, Kennedy explains. “Since we don't advertise, that package is the franchise,” he says. “Why bother going to the effort of refreshing the graphical look of our packages if we couldn't reproduce colors from package to package on a consistent basis? We needed to have that repeatability and quality to make our other efforts pay off.”

To help further with repeatability, C&S is also using a densitometer, running color by the numbers instead of the press operator's best guestimate. For each carton shell it prints, C&S develops a history, stored by the KeyColor. Some carton shells, like those for Jiffy's best-selling corn muffin mix, are produced constantly. Others for holiday or seasonal varieties, for instance, are produced intermittently. The stored data ensures consistent color, regardless of time between the production runs for a particular carton.

“When we proof a job, they (Jiffy) will come over for a press check,” says Stephan. “When they okay it, we save the data, so the next time we put that job on-press, we can go back into the computer where it is saved and just bring it back up, and automatically start adjusting the keys for color.”

Soon after the six-color press was installed, C&S's prepress house, Panoplate Lithographics (www.panoplate.com), Kalamazoo, MI, provided a profile of the new press as part of its own improvement process. “Profiling, or fingerprinting, gave us the characteristics of our press, dot gain and all the other attributes of how one press differs from another press,” explains Kennedy, “Panoplate applies that profile and makes adjustments at the separation level rather than our having to make adjustments on the press.”

With press profile in hand, the EPG system became even more significant. “If we still had to control color by hand, it would defeat the purpose of all these other improvements,” notes Kennedy. “The investment in the EPG KeyColor lets us make adjustments from the console accurately and quickly.” Training press operators to use the system went very well, Stephan recalls. “The system is easy to work with,” he says. “The press operators love it. It makes their job easier and saves so much time—it's like night and day from the way we used to do things.”