The Fresherized Foods Div. of Avomex, Inc., which proudly lays claim to being the largest U.S. producer of guacamole, expects to pocket savings of 20 to 40 percent with the installation of an Iconotech (www.iconotech.com) Optimizer off-line digital case printer at its sprawling complex in Sabinas, Mexico.

Since it began operating in Sabinas eight years ago, Fresherized Foods sourced preprinted corrugated in San Antonio, TX, and shipped them 180 miles to Sabinas to be converted, a costly process. Once in Mexico, the preprinted cases were packed with Fresherized's signature guacamole products, as well as juices and salsas. It then shipped the products worldwide to retail and foodservice customers such as Albertsons, Kroger, Costco, and Sysco. As truckloads of the finished goods headed back north into the U.S., they would pass other trucks loaded with preprinted corrugated traveling south into Mexico.

These challenging logistics were eating into Fresherized Foods' bottom line. Something needed to be done to stem the high costs of fuel, inventory and other brokerage and duty fees associated with continual border crossings. To further complicate the picture, Fresherized Foods had more than 100 stockkeeping units (SKUs), with more added each month.

The solution came when Cesar Trevino, superintendent of Fresherized Foods' Sabinas operation, visited Superior Foods in San Antonio and saw an Iconotech Optimizer. Trevino realized that if Fresherized Foods obtained an Optimizer for its Sabinas location, the company could switch to generic cases and eliminate the costs associated with the preprinted corrugated. After an evaluation period, the company ordered an Optimizer this past summer for Sabinas. Fresherized Foods, with annual sales of $100 million, has 12 processing lines. The firm employs water in an ultra-high-pressure process that uses 87,000 lb/sq in. to kill naturally occurring food pathogens. The process maintains the foods' taste, texture and naturally occurring vitamins while eliminating the pathogens that cause food deterioration and affect food safety. 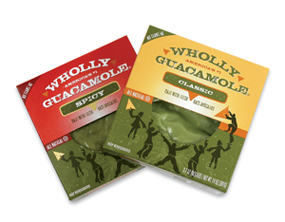 The Optimizer system at Fresherized Foods consists of three main components: a printer; a restacker; and a return conveyor. A computer-generated imaging film is produced to begin the print process. It allows exacting placement of high-resolution print anywhere within the 11x32-in. print area, including text in any Windows font, fine-line graphics and logos and consistently verifiable bar codes in a variety of symbologies. Print resolution is 200 dots/in.

The print information is saved as a template and can be recalled when needed for a production run. Each SKU can have its own template.

Functioning as the heart of the system, the printer prints one color on flat regular slotted containers (RSCs), one side at a time. An operator stands alongside the printer and feeds cartons into a sloped magazine on the feeding end. Each side of the magazine is independently moved to accommodate the case blank and position it correctly in-line with the stationary print cylinder.

According to Steve Colombo, Fresherized Foods director of supply chain, the Optimizer is currently handling 50 cases/min there. And, he expects the system will reach the maximum rate of 60 cases/min.

Ink is automatically circulated internally within the cylinder. The proper level of ink is automatically maintained to ensure optimum printing results. Imaging film, which replaces rubber-printing dies, can last up to 5,000 impressions.

Colombo is very pleased with the Optimizer and notes the system's positive impact in driving out costs.

“At one time, we had 159 different preprinted cases,” says Colombo. “By going to the Optimizer, we were able to take that down to fifty generic cases. It's a huge difference and it's going to be a great savings for us.”

After exiting the printer, the printed cases enter the restacker. Both sides of the restacker are independently controlled to match the case size and print location as the case moves through the printer. The upper chamber captures the printed cases and releases to the lower chamber when it has captured five cases. The bottom stack can be programmed to accumulate multiple “dumps” of five. Bundles of printed cases are released by the restacker to the return conveyor. It takes approximately 2.5 to 3 min to return to the operator. If the second side of the case requires printing, the operator would then flip the bundle and print the opposite side.

The Optimizer features a control panel for the printer and restacker. Only one main power feed is required. For the printer, 230-v, single-phase power is needed. The restacker is plugged into the printer.

The return conveyor from Hytrol Conveyor Co., Inc., (www.hytrol.com) is shaped like a horseshoe and reduces operator fatigue by returning printed bundles at approximately waist-high.

Fresherized Foods is so pleased with its Optimizer that it ordered a second unit. The company has been growing at a rate of some 20 percent per year for the past three years, so another Optimizer will help accommodate the company's continued growth so that it enjoys years of smooth operation.