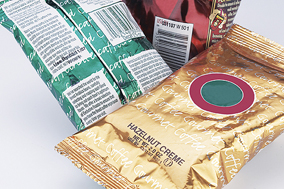 Steeped in tradition, Mother Parkers Tea & Coffee, Inc.'s formula for success has been based on combining consistent quality and value with an innovative and responsive approach to meeting market demands. With a roasting plant and distribution center located in Fort Worth, TX, the Mississauga, ON-based company has been in business since 1912, producing a wide variety of private-label and branded coffee and tea products for retail and foodservice distribution to food stores, hotels and institutions throughout North America. Its product line includes roasted coffee, instant coffee, assorted teas and coffee creamers in several package configurations and sizes.

As a further testament to its thriving business, Mother Parkers brought its coffee package-coding process up to speed and enhanced the appearance of its use-by dates, production times, lot codes, flavor descriptions, content weights and bar codes with a set of thermal-transfer coding systems from Markem Corp. that could improve code clarity, equipment reliability and production-line efficiencies. The equipment upgrade went so well that the company has progressively added a total of 13 of Markem's SmartDate(R) 2i 100 and 3i 100 intermittent-motion, thermal-transfer coders to both new and existing coffee-packaging lines. 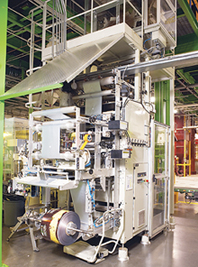 The thermal-transfer coding systems are installed on a variety of vertical bagging machines.

Buying coffee beans from all over the world, the company processes and packages coffee in pouch sizes from 5 oz to 5 lb across its product lines and is also a private-label roaster for various clients with specific needs. This means that the company must keep ahead of what is going on in the industry and must take stock of all things "java." To keep its packaging operation buzzing, Mother Parkers decided to adopt the SmartDate systems to apply clear, crisp multiline date codes and bar codes to what it calls its "fractional" pouches of coffee. The company was looking to replace a set of older hot-stamping printers, some of which were installed on a few of its newer production lines. It wanted the manufacturing codes and pouches to portray a better first impression of its coffee and tea brands and wanted to install printers it could use for wide print areas (up to 4.2x2.8 in.).

"We needed intermittent coders for consistent placement of the package codes," explains John Hawkins, manager of manufacturing systems at Mother Parkers. The SmartDate intermittent-motion 2i 100 was a logical choice, he says. Later, the company added the more recently introduced 3i 100 thermal-transfer system for its ease of use and for its ability to print high-resolution images at 300 dpi. The company currently has 13 SmartDate systems. It says they help keep running costs to a minimum, make no mess and have improved code quality. And, the thermal-transfer technology works well on flexible packaging without using toxic inks or consumables, Hawkins says. 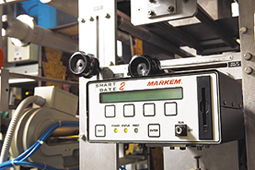 So far, Mother Parkers has 13 of the new coders at its plant in Fort Worth, used for coffee-pouch packaging.

"This was the right type of machinery for the job, and it can keep up with our line speeds," he adds. "It has had the reliability, support and performance we needed and not having to worry about solvents or inks is certainly advantageous." Installed on assorted vertical baggers from suppliers, including but not limited to Ilapak and Triangle, the coders provide maximum uptime on the packaging lines as well as reliability, increased efficiencies and improved product traceability, the co. reports. Equipped with a four-line graphic user interface that features a simplified menu layout, the coders incorporate Markem's CimControl® software, which helps make image design and connectivity quick and simple and updates product data. In addition, Mother Parkers is able to track products effectively. "We have always utilized product traceability," Hawkins says. "The coding is used to indicate which production run a package is from. We use the CimControl software to perform job selection and image development."

Read how Unilever automated pallet labeling, coding and shipping operations at sites including the Knorr plant in The Netherlands, as part of a global initiative to improve logistics and compliance and to cut costs at www.packagingdigest.com/info/unilever

Generally, Mother Parker's coffee operation on the bagging machines begins as a roll of pouch film mounted on a spindle unwinds through the machine and moves through a series of stations before it leaves the roll as it passes through the film carriage. It's here that the company had most of the SmartDate coders set up to apply specific codes (usually a multiline code, including alphanumeric product information, production or use-by dates and other details, depending on the product stockkeeping unit and the package) to the coffee pouch film.

Closeup shows the coffee pouchstock unwinding through one of several vf/f/s systems Mother Parkers uses in its coffee-package production.

Coder printing speed can be adjusted according to film speed via the SmartDate control-box system settings. The coded film is then formed into a pouch or bag, seals are produced, and the coffee emerges from a weighing system and drops through the forming tube, into the just-made bag. The film then heads through more sealing stations to create horizontal seals, after which the bags are cut and separated from the film webs and the start of the next bagging cycle begins. The coffee pouches discharge from the machines and land on takeaway conveyors. For Mother Parkers, the move to the thermal-transfer coding process was a success. Its 13 new SmartDate systems have brought it luck. "We can apply graphics, date codes, bar codes and text to the packages or whatever a customer requires," notes Hawkins. Sums up Hawkins: "I believe that any additional [coffee- bagging] lines we buy will usually include a Smart Date coder."