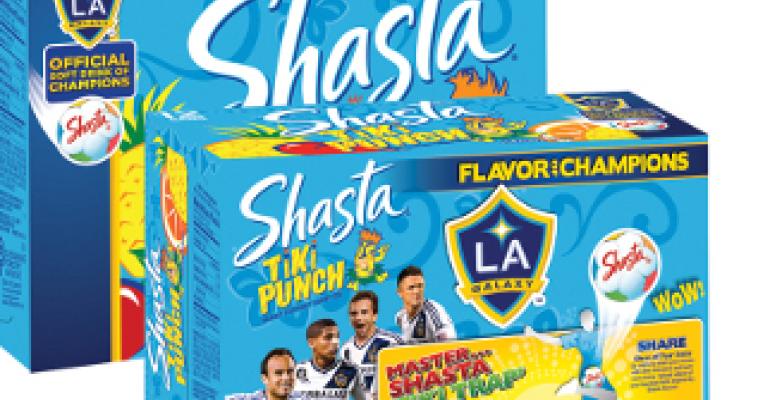 Promotional advertising will be prominently featured on Shasta 12-Packs of Cola, Tiki Punch, Orange, Twist and Grapefruit Zazz along with retail point-of-purchase signage. SnapTags are the mobile gateway to engage fans in this promotion. When soccer fans snap and send or scan the SnapTag they can access exclusive Shasta FlavorStyle videos featuring tricks and tips from the Galaxy Futboleros "Soccer Entertainers" who have created a new and unique way to excite the soccer world. With a deep background in soccer entertainment, Galaxy Futboleros perform soccer tricks and juggling that combine speed, strength and balance to create high energy performances that are truly one of a kind.

Fans may instantly "Like" Shasta on Facebook and show their flavor by uploading their own soccer trick videos to be ranked by Galaxy fans. A player from the LA Galaxy will select their favorite Shasta FlavorStyle video to be that month's winner. Monthly winners will receive a variety of Galaxy and Shasta prizes. Winners will also have their videos displayed online and on the DiamondVision jumbo screen at a Galaxy home game. At the end of the season, the Galaxy Futboleros will select one of the monthly winners as a grand-prize winner to receive $1,000 and a six-month supply of Shasta.

"We're delighted to provide our SnapTag technology to LA Galaxy and Shasta during their summer promotion," says Nicole Skogg, SpyderLynk Founder and CEO. "We've seen great participation rates for campaigns in which SnapTags were deployed during sporting events and for major beverage brands including at last year's SuperBowl. This campaign provides a fun and easy way to get fans involved to build brand awareness and drive summer sales."

"Shasta is excited to use SnapTag technology on our packaging and materials to engage our consumers," says Abbey Glaser, director of brand management at Shasta Beverages Inc. "Our Shasta Flavorstyle promotion powered by SnapTags gives fans an easy and immediate way to connect with us and bring to life the fun and flavor of the program."

"SpyderLynk offers an innovative mobile marketing technology solution with their SnapTags," says Bill Pedigo, svp of AEG Global Partnerships, division of AEG, owners of the LA Galaxy. "What is enormously beneficial is that the SnapTags are uniquely branded, scalable because they are accessible to anyone with a camera phone, and they are measurable offering deep analytics, and an opt-in messaging system allowing remarketing opportunities for brands."