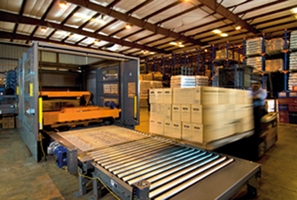 Thriving from a booming tourist trade and the region's need for clean, safe water, Cristalia Premium Water, considered the Caribbean's leading bottled water company, has a popular water brand and a successful private-label bottling division. The company has made more than a splash in revenue, up a whopping 400 percent since 1999. With its own trucking company, Expert Trucking and its own well water supplies, the company hopes to soon handle everything from bottle manufacturing to final product delivery. In order to maintain growth, Cristalia will soon open a new production facility in Carolina, Puerto Rico, near San Juan Airport. Four times larger than its existing plant in Ponce, Puerto Rico, Cristalia's new water bottling facility will be the first vertically-integrated bottling plant on the island. The company also says that it plans to invest $12 million in water processing, bottling and bottle manufacturing equipment. Startup is scheduled for June 2008.

Helping its cause at the existing facility in Ponce is an entry-level automatic palletizer, the GS 100 Series from FKI Logistex (www.fkilogistex.com), which Cristalia says basically paid for itself within six months of installation, while reducing labor costs, boosting total volume and increasing uptime.

With labor costs being high and a few inefficiencies in its packaging operations, Cristalia felt that it was becoming increasingly difficult to meet demand and maintain profits without automating some of its packaging operations. So Tom Terell, the company's director of manufacturing operations, was charged with evaluating automated palletizing solutions that could help manage the company's rapid growth. The plant in Ponce bottles the water in 16-oz containers and multipacks the bottles. It also bottles 5-gal water-cooler bottles and 1-gal jugs. It had been manually palletizing the containers on four production lines equipped to tray-pack the bottles and shrink-wrap the trays. But Terrell and his team knew that the 20,000-sq-ft plant only had the space to automate one of the lines. 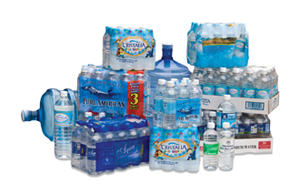 The line running 1-gal jugs was especially a challenge. Unitized in 27-lb cases that were palletized manually, the water jug cases were heavy and unstable, which forced employees to take frequent palletizing breaks.

Four employees worked in an hourly rotation on the gallon line, while other lines running 16-oz bottles and multipacks only required one worker each. Terell says that because the gallon line is the plant's highest producer—filling a pallet every two and a half min—automating it would generate the greatest benefits in terms of labor savings and increased efficiencies.

But the plant's cramped warehouse didn't have room for long, elevated conveyors that are often required for standard high-speed palletizing equipment. So Terrell and the company looked to FKI Logistex's space-saving GS140 case palletizer, the newest model in the GS100 series, as an affordable way to automate the gallon line. The system's compact footprint eliminates the need for a lengthy conveyor infeed and it allows forktruck access to all points of the plant including incoming materials processing, warehousing, production discharge and outgoing product—without intruding on personnel.

Working with FKI Logistex and Puerto Rican packaging component supplier, Inter-Strap Packaging Systems (www.inter-strap.com), which serves Puerto Rico, the Caribbean Islands, Mexico and Latin America, Cristalia chose the FKI Logistex's Model GS140 palletizer, which features a pallet dispenser and a full-pallet handling discharge unit. With it, Cristalia can palletize cases of the gallon bottles at rates of up to 30/min. The system also has a touchscreen open interface terminal (OIT) pattern utility that allows new patterns to be created and stored from the touchscreen. A 10-pallet dispensing system separates empty, wood 40348-in. pallets loaded in by forktruck from the bottom of a stack and automatically feeds it to a pallet pre-stage position. 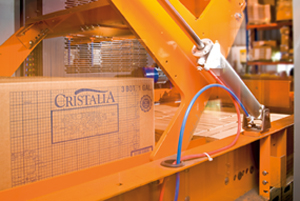 The GS140 builds pallet loads on the company's updated gallon production line using a chain conveyor. The system automatically stacks filled cases containing three one-gallon bottles of water each on the pallet in a variety of patterns, depending on customer requirements.

An existing line-shaft roller conveyor brings the filled cases from the gallon-jug line to the palletizer's infeed as the lift-and-separate pallet dispenser receives empty pallets, ready for an incoming load. An infeed belt controls the case flow into the machine and “gaps” or spaces the cases to suit the machine's internal functions. As cases enter, they're oriented by a cushioned turning device that rotates them as needed, to suit the pallet packing pattern. Case stops in a row-forming area generate voids and a pusher bar transfers cases one row at a time from the row-forming area to an apron that accepts a layer of cases. When a layer is positioned on the apron, the carriage raises to a height above the empty pallet or the previous layer on the pallet and advances over the top of the pallet. The system is set to build 16 cases per layer, three to four layers per pallet, depending on customer specifications.

A stripper bar swings down behind the layer and the apron reverses its travel, depositing the layer on the pallet or the partially built load. The carriage then lowers so that the apron can receive the next layer of cases. When the load is complete, it's automatically discharged from the load-building cavity and an empty pallet is conveyed into position. 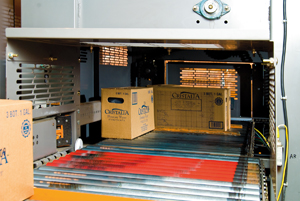 Inside the palletizer, cases are oriented by a cushioned turning device that rotates them according to pack pattern.

Automating the palletizing processs on the gallon line proved to reduce labor costs and minimize heavy lifting, while generating an extra 1,000 cases per shift, for a capital investment of less than $100,000. The palletizer also fit within a 40-ft shipping container, which saved about $14,000 on overseas delivery costs, says Terrell.

The bottler believes it's well on its way to meeting its goal of becoming a $100-million water marketer to the Caribbean, and to the U.S. in the next 10 years.

“The automatic palletizing system allowed us to reduce labor costs by twenty-five percent and increased our total volume by twenty percent,” Terrell sums up. “The most important gain came from continuous uptime and uninterrupted shifts. Now, the [gallon] line never stops. And for the same overhead costs, we're getting more cases out the door,” he says. President and chief executive officer David Virginia says that he couldn't be happier with the service and support provided by FKI Logistex. “They really stepped up and ensured that we met our goal of ninety-seven-percent uptime on the machine following startup,” he reports. “To us, this was the difference between FKI Logistex being an equipment manufacturer and a business partner.”