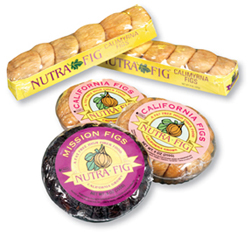 San Joaquin Figs, Inc., a dried-fig processing and packing company located in Fresno, CA, recently implemented an equipment upgrade that got its fig-packing throughput moving swiftly. Marketing and packing a comprehensive line of California figs in consumer, bulk and industrial package sizes under the Nutra Fig label, San Joaquin is the only independently owned fig-processing company in the U.S. with its own source of supply. Selling internationally through brokers, in clubstores and in grocery chains, the vertically integrated company produces major commercially grown fig varieties under the Nutra Fig brand: Calimyrna; Mission; Conadria; and Kadota. In the early 1990s, it solidified its supply base by planting more than 600 acres of figs in eastern Madera County, about 35 miles north of its processing plant.

Roy Jura and his son Keith, both life-long members of the California fig industry, have extensive backgrounds in farming and processing, and founded San Joaquin Figs in 1989. Utilizing a "customer-first" philosophy, the company quickly established itself as an industry leader by consistently producing top-quality fig products. Today, the second-generation business is also the largest of its kind in the U.S., with more than 1,000 acres of fig-farming land, 320 of which it farms organically.

The company's equipment upgrade helped enhance the launch of its new fig-based energy-bar line named Cheetah. The company says that the energy bar has caught on well with cycling racers and other endurance athletes. It says that racers have expressed interest in having the figs in the form of a convenient and functional high-energy food in a familiar form. While the certified organic Cheetah energy bars themselves aren't shrink-wrapped, they got a welcome boost from the solid growth in volume of the company's shrink-wrapped crown-packs and "finger" trays of figs. Says president Keith Jura, "We needed the new machinery before introducing the Cheetah bar. Our Nutra Fig crown-pack business continues to grow, and we knew that we needed to improve production of this line and the quality of its package."

Driven by health-conscious consumers helping to create a renaissance for dried figs, the company is coping with its burgeoning fig-packing operation by opting to purchase a new Lantech (www.lantech.com) SW-1000 shrink-wrapping system. The system has not only increased the packaging output of its main line of fig product by 30 percent, but it's addressing an issue with dog ears—an unsightly blemish—occasionally associated with the former film wraps of the crown-shaped packages. It's also eliminating what San Joaquin calls holdover work that began to build up from day to day.

According to Jura, the new, automatic side-seal wrapper and an accompanying Model ST-700 shrink tunnel have been key to dealing with the surge in output for the fig products. Jura says that while the rectangular "finger" packs of figs can be wrapped easily, the SW-1000 facilitates multipacking of the crown-shaped tray-packs, and that has been a big help in fulfilling the requirements of a major clubstore chain—something the company says it had a difficult time achieving before it discovered the new wrapping method. 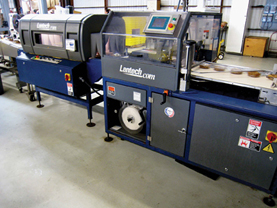 San Joaquin's new shrink-wrapping system is a side-seal machine that operates at low temperatures and doesn't trim film with heat, which eliminates melted film, a problem the company experienced previously.

San Joaquin wanted equipment that could produce a quality wrap at a higher output and that has versatility. Says Jura, "The former sealing machine was like a single-shot rifle that had to be manually loaded for every shot. And the shrinking method we used before left hard dog ears of film on our round crown-packs."

The most popular of San Joaquin's retail packages, the crown-pack displays the figs in a circular fashion. Measuring 5 in. dia, the clear, shallow package comprises a polypropylene base tray that San Joaquin tops with a layer of 75-ga clear, heat-shrinkable film and an adhesive label (the company did not identify material suppliers).

The company's plant in Fresno runs about 4,000 to 5,000 cycles a day most of the year, so holdover work would pile up, in some instances. "That holdover could compound if we experienced any other problems," Jura admits. "And it was difficult for our previous machinery to stack two-packs of the crown trays, a request made by the national warehouse customer."

Working through local equipment distributor Xpedex (www.xpedx.com), San Joaquin sent some of its 9-oz crown packs to Lantech for test wrapping while it was evaluating the SW-1000 wrapper and ST-700 shrink tunnel.

The round pack would be a challenge for most wrapping systems to handle, according to Bruce Campbell, Lantech's product manager for shrink systems. "San Joaquin is trying to make a square or rectangular bag of film shrink into a tight, round form, so naturally, there's a lot of excess film at the corners," Campbell explains. "When the crown package enters a typical forced-air [heat] tunnel, the airstream causes the film bubble to contact the package prematurely, which in a sense, freezes the film and causes dog ears and wrinkles," he says. "Nonuniform shrinking is the cause of the dog ears, as the center of the film bubble starts to shrink first and quickly. The dog-ear areas lag behind and thicken so rapidly that they never shrink completely but instead form hard tags of film." 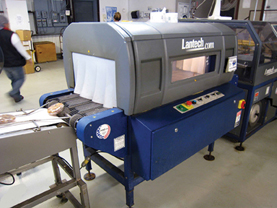 The soft-convection shrink tunnel transfers heat so that it operates around 280 deg F for most polyolefins, about 70-deg less than many other tunnels.

With an innovative side-seal process designed to eliminate changes in seal quality that can be caused by film buildup on traditional hot wires, the shrink wrapper has what Lantech describes as an extra large operating sweet spot for time, speed and temperature control.

"The test-packs looked noticeably better," Jura says. "This is important to us as a premium packer. It factors into the brand image we project to consumers."

Campbell points out that the ST-700 tunnel uses convection heat to overcome the hard-tag problem because it uses a minimal amount of gentle air circulation. There are no inlets or discharge ports that can cause air turbulence. The tunnel's heating elements are located inside the shrink chamber, exposed beneath a transport belt, with low-speed propeller fans situated below them. The side-seal-wrapped fig packs are exposed to direct radiant heat, as well as the gentle circulation of hot air, which transfers heat evenly to the film bubble without exerting force or pushing on it. The tunnel's heating elements respond quickly to temperature changes, so the convection tunnel holds its setpoint temperature within ±2 deg F. Campbell adds that the efficient transfer of heat allows the convection tunnel to operate at around 280 deg F with polyolefin films—about 70-deg less than many forced-air tunnels that shrink the same type of film.

The test-packs looked noticeably better. This is important to us as a premium packer and factors into the brand image we want to project to consumers."

Setup for the convection tunnel is easy, Jura notes. An operator sets the conveyor speed slightly faster than the shrink-wrapper speed (the line usually runs 30 to 38 packs/min, depending on package configuration, Jura notes) and then determines the optimum temperature by observing the behavior of the film bubble through a viewing window in the tunnel. The operator then sets the temperature to a point that causes the film bubble to peak and start shrinking as a fig package passes through and over a riser bar in the tunnel.

"We can change the machine over from one package size to another in ten minutes," observes Jura. "And there's no holdover work at the end of a shift [San Joaquin runs one shift a day]. The side-seal system operates at fairly low temperatures [316 deg F] and doesn't trim the film with heat, which has eliminated problems of melted film." The "fig-tastic" upgrade makes for a sweet ending, Jura says. He may add more wrappers if sales increase further.