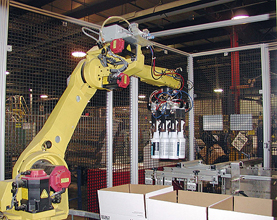 Inside the case-packing workcell, the six-axis articulated robot uses its arm to reach over incoming, empty shipping cases to grip a half-dozen filled spray bottles and orient them before placing them in one of the shippers. The loaded case then exits to be taped closed.

Perhaps the largest supplier of privately branded specialty cleaning chemicals in the nation, U.S. Chemical' s plant, in Watertown, WI, packages products, including liquid and powder cleaner formulas and stain removers, in plastic containers that range from sprayer-topped bottles to quarts and gallon jugs. Used for ware washing, laundry, housekeeping and janitorial services in hospitals, hotels, universities, commercial laundries, restaurants and other institutions/foodservice areas, the products were at one time packed by hand, which involved plenty of repetitive functions.

In addition to safety guarding and an inbound bottle conveyor that meshes with an exiting conveyor for a smooth transition, both of which were designed by Promatech, the robotic cell houses a single-arm M-16iB Series articulated, six-axis robot, equiopped with a set of interchangeable grippers to pack corrugated shipping containers automatically, replacing a manual operation that has been in place for about eight years.

Originally, the cleaner bottles conveyed from filling stations to a manual packoff section where they were typically loaded in counts of four or six into awaiting shippers that were erected automatically. Line operators lifted the bottles from the conveyor and placed them into the cases, which were quickly closed and sealed. But as product volumes and the variety of products and containers grew, it became necessary for U.S. Chemical, a JohnsonDiversy company, to add a second shift and add another operator.

U.S. Chemical says there was a lot of repetitive motion to these manual case-loading tasks. To improve its packaging adaptability and to stabilize operating speeds and eliminate the labor-intensive functions, the company brought the case-packing operation in-line, says plant lead Robert Dourlain. "Increased speed wasn't really a factor, but automating the operation gives us the consistency we need, and we don't have to worry about operator fatigue setting in." 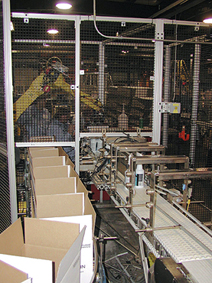 Empty shipping cases flow into the robotic pick zone on one conveyor while filled cleaner bottles move in the same direction on another.

Prior to accepting the new system, Dourlain says U.S. Chemical sent a group to Promotech for training. "They did a dry run, and that gave us some exposure on how the machinery operated," he recalls. "After the system was put into place, our operators had a good understanding of how to make it work in our facility."

Dourlain adds that the company was able to automate the bottle-loading and packoff operation and transfer the case-packing staff to other areas. "We were able to re-assign these employees to other areas [within our facility] where we needed extra assistance or weren't yet ready to automate," he says.

"I recall at least five different grippers that we provided, which require about ten minutes to physically change over, along with a program [setup] change," says Corey Long, automation engineer at Promatech.

In operation, the filled, capped or sprayer-topped bottles and empty cases simultaneously approach the robotic cell on parallel conveyors.

Transported from filling and labeling stations, the bottles are diverted onto two adjacent tracks or lanes as they enter the robotic cell. Sensors on each side of the tracks are set to detect when the bottles are in place on the tracks. Meanwhile, the shipping cases convey into position in the cell. When the sensors show the proper number of bottles are present to fill a case in position, the robotic arm then grips them and adds them to the next case in line. The sensors can also detect if there is no bottle in loading position and allows the next group of bottles to move ahead on the line. 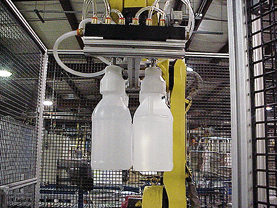 Here, one of the robot's custom bottle grippers uses inflatable bladders and a spring compliance to load multiple cleaner bottles with ease into an awaiting shipping container.

Dourlain points out that while the U.S. Chemical team had no previous experience with this type of equipment, it found the system easy to learn to operate. "A maintenance person checks the setup if they encounter any issues, but the operators continue to learn the skills needed to perform more of the setup and changeover between containers themselves. In addition, Promatech is able to provide technical support when we need it."

The modular M-16iB Intelligent Robot is electrically servo-driven and can rotate 360 deg from its Axis 1 base. Designed to handle payloads up to 20 kg (44 lb) and reach items from 1,885 mm (about 74.21 in.), it offers repeatability of ±0.08 mm at full speed. The system is outfitted with Fanuc's iPendant teaching tool, what U.S. Chemical operators use to program it and to make operating adjustments. The Windows(R)-based, color teach pendant is Internet-ready and comes with Fanuc's Handling Tool Software and Programmable Machine Control (PMC) software.

"An operator can select a program in a few seconds," explains Long. "Each program is stored in the system's memory so can be found easily."

Running two shifts a day, five days a week, the end-of-line casing operation usually packs different product formulas according to bottle size, Dourlain adds. "We try to run formulas that all come in quart bottles or gallons or spray bottles together, to get a longer running time without changing the tooling." It takes about 10 minutes to change the robot's end-of-arm effector unit but Dourlain expects to cut that time in half through some planned modifications to the attachments. Production run time varies, but typically averages to be one or two shifts per container, he reports.

"U.S. Chemical wanted to use a single robot to pack cases of several different types of bottles in various multiples," explains Long. "We often provide tool changes, but a lot of the production runs don't change often enough to justify that," Instead, the equipment integrator created a number of different work or job holders that could be changed to accommodate the different bottles. "They aren't all uniform bottle shapes and sizes," Long points out. "Some have spray handles, and there are balance issues. If you pick the bottles up on center, they can sometimes tilt one way or another, so we added stabilizers and other features to the equipment." 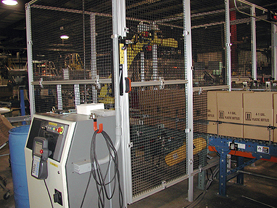 Running two shifts a day, five days a week, the robot (behind the safety fencing) fits into a tight space where the earlier manual packing was performed. Cage doors require special key access.

Another consideration was the behavior of the bottles during robotic handling. "Each program is unique to each bottle," Long explains, "because there are forces that act on the bottles when the robot moves at different speeds. We had to finesse speed acceleration and deceleration, because if the system picks up a bottle off the line and moves as fast as it can, inertia and momentum will act on the bottle and its contents. That could make it difficult to position the bottles properly in the cases."

Long says that floorspace at the plant was another consideration. The robotic workcell was designed to fit into a spot where the manual case packing had been located previously. This is a tight area, since the case line, which transports erected cases toward the loading workcell, runs right alongside the bottle conveyor. "Consequently, the robot arm must reach over the cases to pick up the bottles and bring them over the case and place them inside. U.S. Chemical developed a case-flap spreader to ensure that the case flaps are always completely open when the cases reach the robot."

Sick, Inc., also installed various sensors and safety devices within the robotic cell to monitor and control container placement, protect line operators and others and to prevent disruption of operation. Its WT4-2P330 proximity/diffuse sensors signal when bottles and cases are introduced to the robot and reach the proper location for case packing. The sensors also verify that the bottles are in the correct pack pattern and orientation. Doors on the cell's cage are equipped with SICK E1000SK1 safety key devices so that when an operator needs to enter the cage, she activates a "request-to-enter" button, and the program sets the robot on "pause mode" at a convenient point in operation, to allow the operator to use a special key to open the doors. The robot will not restart until the key is used again, to ensure safety.