Complete solution gets project off the ground quickly 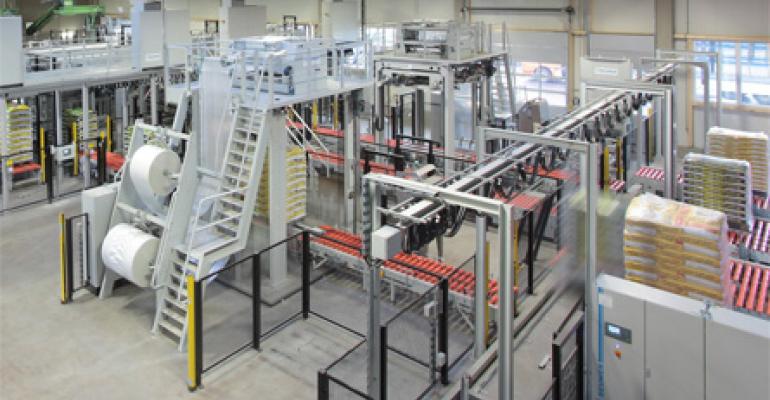 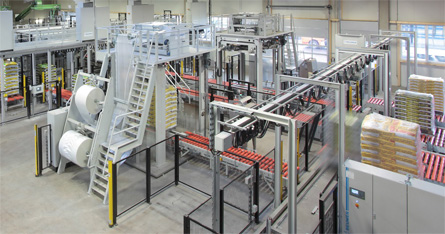 Terrasan Haus + Gartenbedarf GmbH & Co. KG in Rain am Lech, Germany, is the southern German market leader in the manufacture and distribution of fertilizers and soils. A few years ago a major fire which destroyed much of the soil production facility jeopardized the existence of the company. The plant had to be rebuilt within just four months—and a complete, complex palletizing and packaging system had to be delivered and installed in that timeframe. Beumer was the only supplier who could meet this high demand. Tests and initial startup were performed exactly on target.

"Satisfied customers convinced of the quality of our products" is the philosophy applied by Terrasan Haus + Gartenbedarf GmbH & Co. KG, which produces soils, bark, solid fertilizers, lawn seed, liquid fertilizers and insecticides. All products are precision-mixed and filled by automatic, computer-controlled systems. In all, the Terrasan Group operates more than 30 automatic filling lines across Europe. After filling, the goods are then palletized, packaged and delivered to well-known DIY stores, discounters and supermarkets. At the central facility in Rain am Lech, Bavaria, 35 trucks are loaded each day on an annual average—as many as 100 a day at seasonal peaks—normally with 26 to 28 pallets per truck.

In early September a few years ago, everything changed: a big fire broke out at company headquarters in Rain am Lech. "The fire destroyed a whole complex of buildings and crippled our entire soil plant. There wasn't a stone left standing," says Hans-Jürgen Riehl, Terrasan managing partner, recalling this dark chapter of company history. "The company's very existence hung in the balance." This is because the sale of garden soil is a seasonal business. "If the soil isn't in the stores on time in the spring, then we are stuck with it and incur enormous losses which we cannot compensate," he says. As quickly as possible, a decision had to be made on the continuation of the company.

"We realized that we needed a new soil plant—and that it had to be completed no later than Jan. 31," explains Walter Eppinger, technical plant manager at Terrasan. Strictly speaking, it was an impossible undertaking. "At least eight to 10 months are usually needed for such a project— we had to manage it in less than half that time."

The old building covered an area of approximately 16,000 sq ft. A larger new building with more than 19,000 sq ft was planned. It had to have room for five bagging plants as well as five palletizers and two packaging plants for filling garden soil and bark mulch into sacks, stacking them and then packing these stacks. In addition, there had to be space for a sixth line if it became necessary to expand production.

The right partner in critical phases
For the delivery of complete palletizing and packaging equipment the name Beumer (www.beumergroup.com) was mentioned at a very early stage. The intralogistics expert was known to Terrasan as a leading company in that sector. A week after the fire the Beumer specialists from Beckum, Germany, were invited in for a discussion. "The very first meeting gave us a good feeling. We did review other offers and concepts, but Beumer's proposal suited our requirements best," Eppinger reports. "We sensed that with Beumer we were bringing the right supplier on board—one that keeps its promises. Beumer was the right partner and met our requirements within the brief time available."

One month after the fire, the gutted buildings were completely torn down. Reconstruction proceeded at full speed, with Beumer installing the complete palletizing and packaging equipment. Installation took place under less than favorable conditions because construction occurred during the ice and snow months. Windows and doors had not been fitted in the new building yet, and services like lighting, running water and heating had not been installed.

Ensuring a smooth sequence of work
Terrasan fills bags with capacities ranging from five to 125 liters (0.18 to 4.41 cubic feet). The bagging machines get the empty plastic bags into shape, fill them with soil and seal them. One notable aspect is that in the short distance between the bagging machine and the palletizer, the relatively large proportion of air in the bags must be pressed out of them on smoothing lines. The bagging machines make a perforation in the bags so that the air can escape. These different packaging units are stacked both on Euro pallets (800  x 1,200 mm or 31.50  x 47.24 inches) or on a narrower size known as a Düsseldorf pallet (600 x 800 mm or 23.62  x 31.50 inches). The stacking quality must be particularly good because in some cases two full pallets have to be arranged on top of each other.

The efficient Beumer paletpac palletizers meet this requirement, each able to stack up to 2,000 bags per hour in this application. These palletizers, distinguished by their reliability and high quality of the stacks they produce, can be flexibly adapted to the specific application at hand. For better handling of the soil-filled plastic sacks, the Beumer paletpac units have rotary clamps so that they can put the bags in the correct position.

Specially adapted to space requirements
One problem was that space had to be reserved in the existing area for a possible sixth line for palletizing and packaging soil. Accordingly, the systems were moved closer together. Because that did not meet space requirements, the design of the palletizers had to be changed. As a result, the Beumer specialists arranged the lifting gear motors differently. In addition, the bottom sheets of film that go on the pallets are no longer fed into the machine across the direction of pallet travel, as is normally the case, but in the direction of pallet movement. With this change, now the same film format can be used both for the Euro pallet and for the narrower Düsseldorf pallet. One palletizer also had to be adapted to stack the larger 125-L bags.

Ready for transport and safe from UV radiation
In addition to palletizing, Terrasan also focused attention on the selection of new packaging machines. For its pallet packaging equipment Terrasan selected the Beumer stretch hood, which has an output in this case of 90 pallets per hour. For this application Beumer supplied two identical Type M high-performance stretch hood packaging machines. One of these dual-format machines is equipped with a master pallet converter which enables the placing of two stretch-packaged Düsseldorf pallets on one Euro pallet. If this complete unit needs to be stretch-packaged once more, it can be discharged via a bypass and fed in again upstream of the stretcher.

Because the merchandise is stored outdoors, the packaging machines package the palletized stacks of bags in a stretch hood made of a special film designed to protect against ultraviolet radiation. The finished bag stacks are very stable because the film stretched over the pallet is kept under continuous tension in the horizontal and vertical direction—even if the soil in the bags settles, reducing the bag volume. The bag stacks, completely packaged after this step, are then transported to interim storage areas. From there, forklift trucks carry the finished pallets to the pickup points for truck loading.

With the installation completed Riehl says, "It was a very tight schedule. It took just 10 weeks from order placement to delivery and installation." Four weeks later the tests were run and commissioning took place. Beumer managed to get a complex project off the ground in a short time. Its success was crucial to the future of Terrasan, as Eppinger concludes: "Choosing Beumer was the right decision."